Varanasi to Siliguri, a Gorka strike and a birthday

Tashiding or was that Tashadingaling?

The Slick State of Sikkim- Gangtok

Wow, what a contrast. Are we still in India?

After the dirty market town of Siliguri making our way north and further a further up the luscious green mountains I feel as though we are somewhere further east like Thailand or Vietnam. A mixture of tropical trees with towering pine trees cover the steep hills. Hitting the border we are told that smoking is banned in public here, so we have our last literally one before setting off north again.

The first thing we notice apart from the never ending greenery are the signs by the side of the road delivering words of wisdom and commentary on the roads progress… usefully from your “BRO” (Boarders Road Organisation). Every piece of work that is carried out in Sikkim has a notice telling people how much the work cost, the time it will take, the name of the main contractor (person not company), what is being done, often with technical drawings and the time they guarantee the work. It is nice to know that if something goes wrong you can hunt the responsible party down in person! We also see a sign that says “Better late than never” on a landslide barrier. This confirms our concerns that we are now firmly in landslide territory. We are also in the monsoon season. Rain + steep hills = landslides. A formula we are not liking too much.

As Laura’s Birthday lingers on (as it should) we arrange to have a few drinks with the guys who we caught the jeep with and agree to stay with them to make this easier, despite aiming to stay in somewhere mid market as a Birthday treat for Laura as a Birthday present. This can wait. 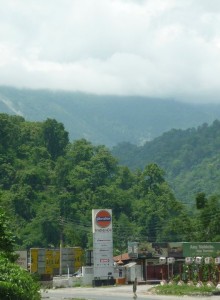 After a 6 hour journey heading further and further into the hills we finally glimpse Gangtok the capital of Sikkim, but only a large town really spread over a steep hill, ranging from 700- 1500 meters above sea level! Winding up tight reverse bend turns up to our destination and then caught a rip off taxi from the middle of town to The Modern Central Lodge- the main backpacker hostel in Gangtok (I was overruled in finding something not Lonely Planetary). I thought Sikkim would be different in terms of ripping you off but perhaps not. The hostel was ace though and a good shout. We all shared a dorm room for Rs75 (1.2 pounds). It was damp, but we headed up to see if there was a roof terrace and were instantly hit with the expansive view over Gangtok below. Spectacular. 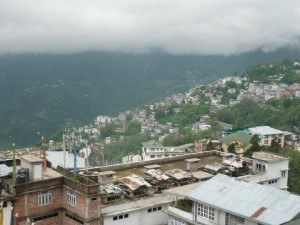 In the winter season you can apparently see Kanchendonga over 8500m tall. Yet missing this was replaced by seeing the clouds streaming over the mountains, moving faster than any cloud I have seen move with the exception of a tornado itself. One minute we were looking up at blue sky and within literally 3 minutes couldn’t see each other across the roof terrace! We spent 3 days in the hostel with the guys and most of this was spent drinking “Hit” 8% local beer (660ml for Rs39- 60p) and Sikkim XXX rum (500ml for Rs60- 1pound). Both headache juice, but definitely traveler style. We finally had our mass backpacker congregation session that was absent up until then and met a local guy Kesang who invited us to his farm.

After 2 days soaking up Gangtok and the different climate, the much more relaxed people and as it turned out eventually people who didn’t make a habit of ripping you off (this is taxi drivers in general) we headed off to Kesang’s farm. Kesang is a character for sure- a man around town who has more business projects and cash than perhaps sense. Yet someone who knows many people and likes helping people out. He really helped out the 5 of us who visited the farm for 1 night. The pace was a “renovators dream”, everything needed just one final touch and the place was absolutely stunning, with better views than Gangtok and 3 bungalows his family planned to rent out to tourists. Sikkim has already started making its mark. I have seen more types of butterfly here in 3 days than in my whole life, in all shapes and sizes. The place has a really relaxed and natural feeling which cannot help but take you down to earth. 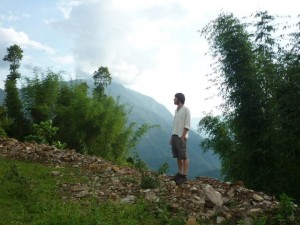 We made fire and Laura and I cooked 3 Indian dishes together from ingredients we bought en route, exceeding everyone’s expectations. We are determined to become global culinary legends! Sitting in front of the fire, being eaten by mosquitos, we drank the night away until the sun came up, then slept the day away (well I did!)

Laura and I wanted to stay as we are searching for a retreat in the hills to take stock and strengthen our spirit from the inside, which can use meditation or other practices. This was not open in a practical way so we headed back to Gangtok and split with the other guys who wanted to “get in more sights”, something we are deliberately lax at. Our philosophy is that if you give things time and go with the flow without expectation or planning cool things turn up at your door, just as the farm visit did.

We headed back to Gangtok and decided now was time for the “Garden Retreat” the Lonely Planet promised. Well it had a garden. The food was good and Tibetan, but for Rs1400 (22 pounds per night), we bailed after one night of “luxury”. To be fair the beds were comfortable and actually had a mattress. The one thing you notice in India is that they still seem to use straw of some other material that doesn’t reform after a few people have slept on it. We also managed to watch some of the world cup, which was also a bonus. Either way we headed up the road to another place called Palim and this place was much better and just Rs900 (13.50 pounds for the room). We secured the best room- the “suit” (not by Western standards), which was large and had beautifully designed Tibetan furniture, including a rocking chair, TV and a balcony overlooking Gangtok. This time however we were just below the palace and so had literally the best view in town. This was with the exception of the roof terrace restaurant of course and these guys cooked us a) and English breakfast, which we felt guilty eating…. for 2 minutes. They also cooked Ting Momos (steamed buns) with Alu Dum (amazingly spiced potato dish), which was a local dish I nabbed the recipe for. For 30p you cannot go wrong, especially when the place was full every lunch time with locals- in your hotel. We stayed for 5 days, enjoying the views, eating, watching the football and enjoying that luxury time we reserved.

After this we headed back to the damp dingy Modern Central lodge that we had developed a good relationship with. It’s 8 floors of climbing to go to your room, the ace roof terrace, our new rasta friend who lived on the roof with tunes, Solomon the manager and Buddha, who introduced us to Tongba for the first time on a rainy day. 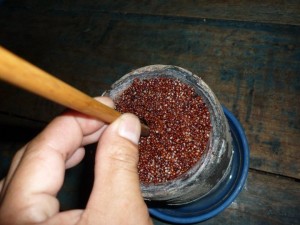 Tongba is Millet seed soaked in alcohol for 6 months to 2 years to ferment. It is served in Bamboo mugs and a vat of hot water. Pour hot water onto seeds, wait 5 minutes, DON’T Stir- oh too late (it clouds the water and gives you a bad hangover), and then sip slowly to avoid eating seeds, finish drinking and replace with more hot water 3 more times until more millet required.

Places that serve tongba are underground. We sat in a kitchen with 3 kids, locals swaying their heads and blinking too slowly than normal, hazy smoky air, Hindi TV and another vat, this time of Yak Thukpa (Tibetan soup). Going to toilet was interesting, all 5 doors were locked and you are faced with swaying men urinating over the doors- ah to be a man- good luck girls I think.

We end up staying at the Modern Central for another 4 days planning our next move and then putting it off. We visited the Banjakri Falls which has been turned into a bit of a tourist place, but for once it charged the same for foreigners as it did to Indian visitors, which was refreshing. I had swimwear ready for full on shower action and chuckled at the sight of Indian tourists getting in ankle deep for a photo opportunity, only for the only white westerner to strip off and dive in… heavy water is all I could say. The Indians staring in amazement were all asking Laura if I would be ok. As many Indian people cannot swim and being asked if I could swim after the event, they thought I was going to drown. 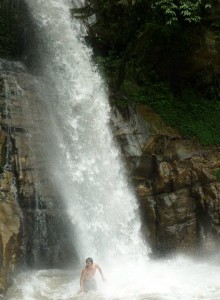 The Modern Central Lodge was damp and dark, but was our home for 8 days and the food was ace. All their food was freshly made and their Momo’s (dumplings) were great, despite taking 30 minutes to make 8 (I could eat 24). We ate a fair few during our stay and I was taught the fine art of making these little veggie beauties by the chef, including the fine art of crimping to take away with me. After all this and soaking up our first destination in Sikkim we were ready to leave. Having extended our permit to 1 month we headed off by Sumo jeep to Tashading in the early morning foggy fine rain.