Return to Planning Your Trip

The land of Everest. Unsurprisingly Nepal is generally the home to visitors wishing to get involved in trekking and other outdoor activities. Kathmandu Valley has thousands of Hindu temples and Buddhist stupas, as well as rich nature reserves on top of the popular trekking persuits. The country is a very remote place and so preparation is important, with consideration of what you are going to be doing. The monsoon season notes barely any tourists, but travel is more difficult, plus many lodges and activities are closed.

60 or more ethnic groups occupy Nepal. The communist party took over the Maoist government in 2008 and this has brought stability to the country. Prices are increasing due to the increasing popularity of the country and as a result of the more stable economic conditions.

Travel is far less safe in Nepal that other countries due to the landscape, with bus crashes most common. Traffic can be a nightmare especially at night.

Nepal’s temperature varies wildly depending on where you are, as a result of the topography of the country. In the Terai (lowlands bordering India) the climate is hot and humid, similar to India. In the mountains however the temperature is a lot lower, sees snow every winter and produces more rainfall.

The monsoon is at its heaviest in Nepal from June to September. The rains are generally lighter high in the Himalayas than in Kathmandu, though the mountain peaks are often lost in cloud. Monsoon season makes trekking more dangerous and difficult. Unexpected changes in the weather occurs and it is during this ‘off season’ that many activies are closed. This includes paragliding and many trails. That said rafting is still an option and sees the most adventurous rapids, as the rivers swell.

Nepal accepts Visa applications at the boarder itself. Some only accept US$ and so even if this isn’t the case for the crossing you will be making it is wise to have an amount to hand in any case. Passport sized photos are needed for all applications and need purchasing in advance (at home). A Nepali visa takes up a whole passport page, so ensure you have enough!

Due to the Himalayan range the main border crossings with Nepal are on the border with India rather than Tibet. These are marked below. 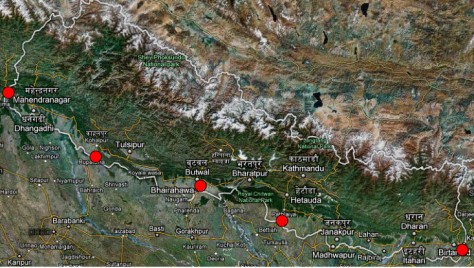 The primary immigration point used is at Sunauli near Bhairawa (second mark from right).

Tourist Visa with Multiple Entry for 15 days: US $25

Tourist Visa with Multiple Entry for 30 days: US $40

Multiple Entry facility (obtained only for the extension period): US $20 or equivalent and visa fee for the extended period.

Travel:
Due to its remote location Nepal is reached generally by road and flying, but flights (quite expensive) are available to the capital, Katmandu. Trains in Nepal are almost non-existent and certainly not available for more than a tourist train ride in the country.

Many people will hire a motorbike to escape from the tourist areas and travel into the country, but be aware of the risks associated. Traffic in Nepal is very unaware and unpredictable, so it is up to you to be extra vigilant and aware of the local laws. Similar to other places in Asia the police can target tourists for motoring offenses to secure a ‘non-official bonus’.

Trains:
Trains are non-existent to use as practical transport or a means of travel around Nepal. The only train that operates is between Janakpur and Khajuri. The train goes on and crosses the border, but this can only be used by Indians and the Nepalise.

Buses:
Do not travel at night when ever possible as drivers use the quieter roads to drive quickly and accidents are common at night, especially in the hills.

Generally you can get away with spending £7 for general bed and food etc. This doesn’t account for park entry, nor trekking costs (Guides and more expensive lodgings).

Trekking: This is at the top of the list for a very good reason. Most people who visit Nepal embark on some form of trekking, whether it be around the Katmandu valley, scaling Everest or the Annapurna circuit.

It is worth knowing however that costs mount and can easily triple the cost of a visit to Nepal. Not only is there the cost for climbing equipment and food/accommodation during the trek, but it is crucial to take a guide with you and often advisable to take a porter to carry heavy equipment. Legally you employ trekking staff directly, which means you need to ensure they have insurance like you, that they are fed, have accommodation and everything they need to take you through the route you want. All of a sudden your costs are multiplied as you pay for the staff necessary to make your trek safe and legal.

It is not advisable to wander off in trainers down a path unfamiliar to you- as if we need to state the obvious!

Parahawking: Trained Eagles take you to the best thermals in the Himalayan range for paragliding. There is a season, which runs from November through to April. We stop flying the birds then due to the onset of the monsoon and the birds annual moult.

Paragliding: Some paragliding centres still follow the eagles to the best thermals, however they do not land on your hand in mid-air, which is a perk for sure.  Paraglides can still be a similar cost to parahawking though

Whitewater rafting: Does what it says on the tin.. especially in Nepal, where the Himalayan range produces some of the best rafting in the world in the most dramatic scenery. The grades range from 1- 5 but vary in volume depending on whether you visit in the monsoon season or not and even this varies depending on how heavy the monsoon for that year.

Bagmati: A dedicated festival to ensure the cleanliness of the holy Bagmati river is held in August. A rafting competition from Tilganga to Thapathali, food festival, live music concerts and exhibitions are all part of festivities.

Boudhanath: One of the holiest Buddhist sites in Bouddha.

Dakshinkali: This temple is dedicated to the ferocious goddess Kali, to whom animals are sacrificed twice a week.

A visa must be obtained (or authorised) prior to travelling. Business visitors and tourists must make their arrangements through a recognised travel agent and pay at least US$200 ($165 in Jul, Aug) for each day they spend in Bhutan (which can include you travel and accommodation costs whilst there). Foreigners (apart from Indian nationals) can only enter or depart the country through certain towns such as Phuntsoling (by road) or Paro (by air), Samdrup Jongkhar and Gelephug.

Three copies of original passport size photographs are required on arrival.
You will have to pay a Visa Fee of US $20 per person for a 14-day visa, which can be further extended for an additional fee of US$15. Please ensure that you bring US currency.

Bhutan Himalayan Holidays are certified by the Bhutan tourist board to work as the necessary guide for any foreigner in Bhutan (except Indians). Download a Visa here.   The bad news is that Bhutan is out of reach for budget backpackers like us, but a plus is that as you only need to spend $200/ day, most travel agents for Bhutan create good package holidays including numerous activities for $200 per night and this counts for your expenditure without the need for complex financial management…. one for the honeymoon perhaps!