What India weather can you expect?

The weather in India varies dramatically.  This section is crucial because it has a huge influence over which cities, places, sights etc you might want to travel to; where becomes unsafe and what activities are available. Of course this is generally influenced by the dry vs monsoon season. The dry season is exactly that: dry and very hot (40- 45C often).  This is the perfect time for visiting the mountains and hill stations, such as Manali and Nainital.

Based on temperature and rainfall, the Indian Meteorological Service has classified the country into an incredible seven different climatic regions. These are the Himalayas, Assam and West Bengal, the Indo-Gangetic Plain/North Indian Plain (a huge section of north-central India), the Western Ghats and coast, the Deccan Plateau (south-central India), and the Eastern Ghats and coast.

In the middle belt of India that includes Goa, Karnataka, Chhattisgarh and northern Andhra Pradesh this is pronounced, as in the desert states of Rajasthan because it is a very dry and arid heat.  The intensity can become unbearable.  The heat of the concrete cities is also incredible.  What people often do not account for are the regular power cuts of the cities like Varanasi, due to the demand placed on air conditioning units.  If you are staying in cheaper accommodation (especially with a fan) then be aware that you may experience hot, hot nights!

It is unsurprising then that when the rains come and cool the cities that people come out and rejoice!  There are problems that the rains cause however.  Rubbish accumulated in the drains cause backlogs and floods roads.  Cow manure that is found in many places turn the streets unsanitary, so if you have open cuts then ensured they are well treated.

Below provides a visual map of the movement and timing of the monsoon across India. 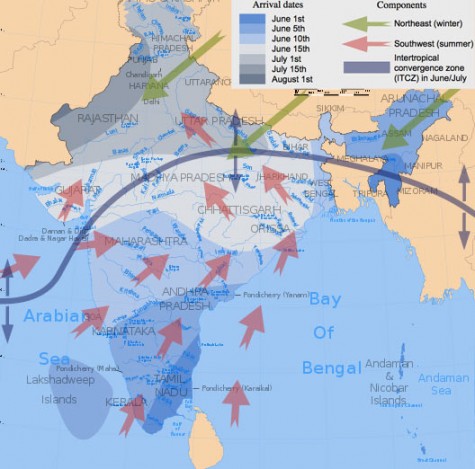 The southwest monsoon reaches the coast of the southern state of Kerala around June 1. It usually arrives in Mumbai approximately 10 days later, reaches Delhi by the end of June, and covers the rest of India by mid-July. Nepal is hit by Monsoons between July to August, when it rains at night and clears thw air for better views of the Himalayan range.

When the southwest monsoon reaches India it splits into two parts around the mountainous region of the Western Ghats in south-central India. The Western section moves north over the Arabian Sea and up the coastal (West side) side of the Western Ghats. The other flows over the Bay of Bengal, up through Assam, and hits the Eastern Himalaya range, giving the monsoon extra strength.

The arrival of the monsoon is a celebrated occasion and a beautiful thing to watch. When the rains come they often come hard.  This can lead to localised, extreme flooding

Where Receives the Most and Least Rain?

The India weather averages out that Delhi, Bangalore and Hyderabad receive comparatively less rain. Chennai doesn’t receive much rain at all during the southwest monsoon, as the south of India (the states of Tamil Nadu, Karnataka, and Kerala) gets most of its rainfall from the northeast monsoon, from October to December. the Deccan Plateau is also relatively shielded by the Western Ghats mountains and also receives relatively little rain.

Yet rain storms there can be very intense during this time, especially during September when the humidity takes longer to build.  Remember also that in the mountains that conditions change rapidly, so be vigilant more than usual. Let people know where and how long you are heading out for and keep an eye on forecasts and local information.

Important areas for India weather awareness is the eastern Himalaya region, around Darjeeling, Shillong and Assam is one of the wettest areas in the whole world during the monsoon. This is pretty much of anywhere at the foothills of the Himalayas.  Travel to this region should be avoided at this time if possible, as it can experience violent flooding. In 2008 this region was devastated by floods, although less so than further down river, as the relative height of the land here sees the water run down to lower ground.  When we were travelling in Sikkim after the majority of the monsoon had passed there were still landslides around the region, which made for dangerous and difficult journeys.

While the Ganga river and the Brahmaputra (north east) river regions make for the areas most prone to floods, states like Orissa suffers from the wrath of river Mahanadi, when the degraded mangrove system makes the region more susceptible to damage.

Make the most of it..

Many people we met in Goa loved staying after the monsoon.  The visitors had all left, and typical India weather had left the flowers and greenery erupted into beauty and it was fresh again.  Weather can be difficult and govern your moments, make travel difficult or even more risky. However go with the flow and just ensure you are aware of the situation.

If you need to change plans then weight up the options and go for that with an understanding that things often need to change.  You never know where else you could end up.  For example we were due to head to the north-west states, but the monsoon had hit, so we ended up travelling to the north-east where we discovered Sikkim, an incredible place.  A month after that decision was made the terrible floods in Ladakh occurred  which we could have been caught up in had we not made that decision.