Hanging out in Kratie 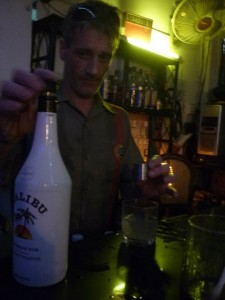 We were dropped off outside the central market and as usual accosted by some tuk tuk drivers, but meandered around them all to find one away from the Mayhem.  The usual $3 price to Lakeside was secured quickly as the driver realised we had been here before, and soon we were crawling up the small dead end road, splashing through large puddles left from recent rains.

The owner of the hotel and the tuk tuk driver we had promised we would return for were as surprised as we had predicted by gave us a very warm welcome and were happy we chose to come back. We were shown an equally small, but clean room and were soon heading out to for some food. We had already agreed to go back to the cheap all you can eat Indian restaurant, as despite the quality being poor, we were once again starving, so volume was key.

The next stop in our fluid plan was to secure the tuk tuk driver for the next day. $10 for us both to get to the killing fields, S21 and the Russian market, over a 6 hour period. That is the right price.  Next was to pop into Magic sponge and 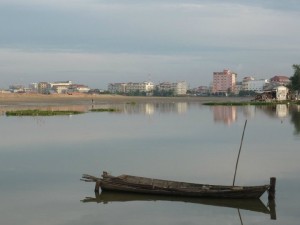 say hello to Hugh. It was 6pm beer time anyway!  Hugh was in a predictable whirlwind mode with stuff everywhere, but started moving stuff around to open the bar for us.  We ended up leaving him to set up and hung out by the river in the other guesthouse’s bar to watch the sun go down and sat chatting with one of the barmen while we drank our 75 cent Krang beer (6% dangerous beer, but cheap!)

We then returned to Magic Sponge and watched the usual mayhem ensue. An interesting point arose when the bar lady who was asked by the owner (Hugh) to do something. She refused on the grounds that it was not the right thing. She looked sheepish, but wouldn’t just ask a neighbour a question. The reason apparently was that she didn’t thing it would be a good thing for them. Hugh disagreed but we all spent time discussing the merits of doing what your boss tells you to do versus take your own initiative. In Asia the fear of reprisal in the community is more than what your boss will do to you. Respect for your superiors comes far behind other considerations here it became clear.

Bang! Suddenly the beer cool box with ice and tap flew on the floor the local bar lady screams and stands there doing nothing. Hugh jumps up and holds things up and secures it temporarily while cursing. Just an average night. However the beer was saved and the sudden, attentive silence was dissolved as the situation was forgotten. Hugh then went on a mission to find late night sugar cane juice. He succeeded after an hour and then proceeded to make us a Magic Sponge special cocktail for free and sorting us out with a few beers on the house which was cool.

The next day we woke early and Laura grabbed a baguette sandwich, while I headed further down the road to eat at a street stall that looked popular a few times we had bought a coffee. A plate of rice, with BBQ pork and some pickled vegetables/ salad for 3000 riel (50 pence) sorted me out with the obligatory ice coffee.

At 9am we set off on our day on tour. We do not do many as they tend to be expensive but this was essentially hiring a tuk tuk for the day, so on the back we sat with coffees in hand and suffocated in the rush hour fumes north out of town on the very route that people were marched out of after the take over of the capital by revolutionary forces in 1975.

Numerous car spare parts and furniture makers watching the world go by and take their time doing there job on the road side, next to the usual ‘rough around the edges’ street stall eateries began to become more sparse as the more baron landscape of the cities perimeter approached.  Trucks roaring past blinded us with dust as our small motobike engine squeeled at its top 50 kph speed. 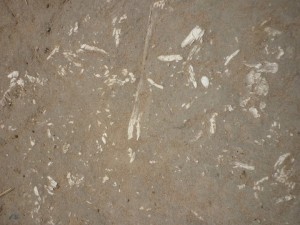 We turned into the killing fields grounds of Choeung Ek and were instantly struck by the huge memorial that was erected to replace the wooden one after funds had been collected by ticket entry to the site. We decided to walk around the other way and read the blocks of information on the history of the Khmer Rouge and why the killing fields existed. A video narrated by a northern Englishman, with terrible English and pronunciation gave basic details of the site and then we set off towards the field.  In Hanoi someone commented ”It was a waste of time, as we basically paid to see a field”.  On the first glance of the field we could see how far from the truth this really was.  The ground contained many pits. The remains of the mass graves.  Walking past these pits you could see pieces of bone and clothing emerging from the ground below us with every rainy season.  This is unsurprising since most of the graves have been left un-exhumed and given that there were just under 9,000 bodies found. 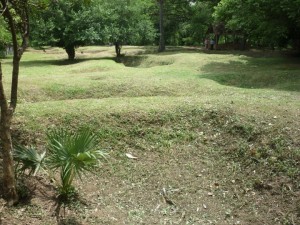 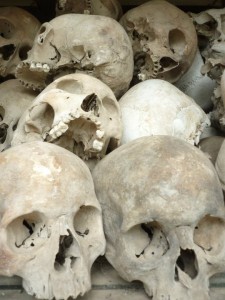 The place had an incredibly eerie feel to it. After reading about what happened and the way people were killed makes you feel queezy that this is something that really happened.  We came across the tree that babies were smashed against and ended up standing at the bottom of the monument looking at the 7 tiers of skulls that had been classified by sex and age range.  The whole thing needed to be seen as it was such an important part of modern Cambodia, the politics of which are based on the revolutionaries that caused all these deaths. We found a book called Cambodia’s Year Zero, written in 1976, which is the best insight into what happened that we would recommend people to read.

We walked back in reflective silence to the tuk tuk who was waiting and gave us a broad smile a we approached and brought the engine into life.  Rumbling back down the track with dust spewing behind and back to town. En route to S21 we past some of the poorer areas of town we had not seen as yet, including wooden shacks that were built on stilts in low lying areas of flood plain and rice paddy fields.

S21, also known as the Tuol Sleng Museum was in the centre of town and used to be a school before the Khmer Rouge turned it into a prison, holding people who were accused of being enemies of the revolution in small cells, beating them, torturing them and ultimately sending them to the killing fields for extermination.  To be fair it ended up getting to the point where we were ”just in another room”.  Yet it needed to be seen as part of the killing fields.  The photo wall was particularly impressive, as you then related the skulls you saw and couldn’t but wonder. I wonder if one of these photos was one of the skulls in the monument?

Next was a lighter stop to the Russian Market. There were other options, but these needed more planning and cash as they were up to 50- 70km away, which meant a whole day and into the night, which wasn’t an option for us. These include Tonle Bati a small lake in the countryside with the Ta Prohm temple. Udong was the former capital of the Khmer Empire Oudong and also sounded a good trip. Yet we felt this was based on seeing the Cambodian countryside and that 70km was too far to warrant going to either. 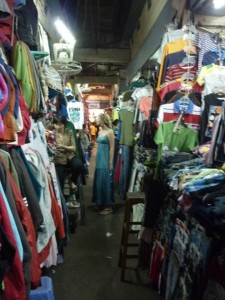 The Russian market certainly didn’t feel very Russian though and wasn’t very cheap either. This is unsurprising given it is a stop on most tours of Phnom Penh.  We wandered around anyway and picked Laura up a small handbag for $2.50 and soon realised that everything needs reducing by 50-60%. A T-shirt should cost around $2 here, but they generally started on $5, so I declined on buying anything, certain to pick something up cheaper at a more local market.

It was fun to wander around and price compare and I eventually caved in on buying a pair of sunglasses for $3, as motobiking in the dust with no glasses means hard squinting and seeing a blurry road, which is not ideal!

At 3pm we returned back to the hotel, but asked to be dropped off outside the sugar cane juice stand (1000 riel or 25 cents).  Next we had to buy a bus ticket out of here, as we spent longer than we should have on the coast and were now keen to head north.  We were going to Kampong Cham a village on the convergence of the Tonle Sap river and the Mekong. Supposedly a beautiful place with the Muslim Cham minority villages, pottery workshops and a pleasant riverside setting. After having looked at the options though we wanted to head further into the north east as it was more remote and was more dense with jungle and nearing the end of our journey we wanted to get into the back end of beyond.

We settled on a bus to Kratie for $5 the next morning and then headed back to the bar for a few beers to say goodbye, before going to pack and get an early night. 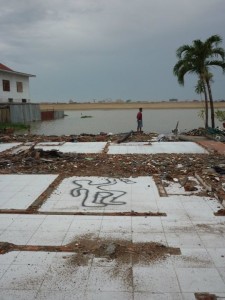 The next day we went back to the man we had frequented who sold long baguettes for 6000 riel ($1.50) who gave us a 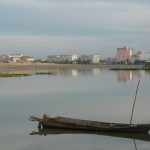 very warm goodbye and looked sad we were leaving. With wishes of good luck we sat and waited outside the hotel as the sun picked up the glow of the remaining lake, knowing that next time we saw it, if ever, it would be gone, as would most of this cool area. 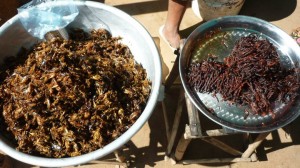 Our over sized van picked us up as is typical when you buy a bus ticket through an agent and makes things much easier than doing it alone. Soon we were on the bus and setting off back up north east towards the Mekong once again.  The journey was great, as the route 7 is still being built and so we took a few diversions through the country via dirt tracks and small villages, where the most activity was in the form of fishermen slowly releasing their nets.  We briefly stopped off in Kampong Cham and knew we were there are two baskets greeted us on getting off the bus, one with fried tarantulas and the other with fried crickets in.  We tried both and picked up “a 6 pack” of tarantulas for the journey. This was much to the amazement of a local guy sat on the opposite row, who watched me eat them to gauge my reaction. Taste like greasy batter with chilli to me. Slightly tough on the outside and squidgy in the middle. No worries.

The few stops we made due to bottle necking at run down areas of roads saw hoards of ladies shouting in the windows to sell their fruit, meat sticks and other food products.  After 6 hours admiring the scenery passing slowly by we realised that we were suddenly in Kratie and immediately saw the Mekong before us.