Securing value accommodation around the world

Flights, accommodation and activities tend to be the biggest expenses when traveling.  Securing value accommodation is often the easiest way of saving money. When you are seeing the world a low cost agenda is paramount …

Well well well. Good old Bangkok.  The word in itself carries as much innuendo as the capital’s reputation.  However, despite the sex and under tone of the fascinating book Welcome to Hell: One Man’s Fight …

Of baseball and karaoke

After a stint of temple gazing in Kyoto it was back on the big old bus to Tokyo, only this time I would not be greeted by the u-bend of a toilet with more buttons …

So the adventure really begins. After our 2 week break on the golden sands of Goa, relaxing as much as possible, getting acclimatised to the hot, humid heat of the Indian summer. We spent our …

Bia hoi in My Tho and a thunderstorm adventure

There are some moments in travel that stay with you forever. They are often the most everyday occurrence  something that back home you would take for granted. Yet when you travel things have a habit of getting carried away and turning into an adventure that leaves its mark on you forever.

One such moment for me happened with bia hoi My Tho, Vietnam.

We had just landed by bus after a 4 hour journey from Ho Chi Minh City and as usual decided to walk in ever expanding loops around our hotel (relatively upmarket at that, which was a novelty for us, but achieved through a 50% room rate discount negotiated on the basis that it was new… and empty). We ended up finding ourselves walking through the residential area which clearly rarely saw visitors, as was apparent by the stares and shouts we received as we walked by. 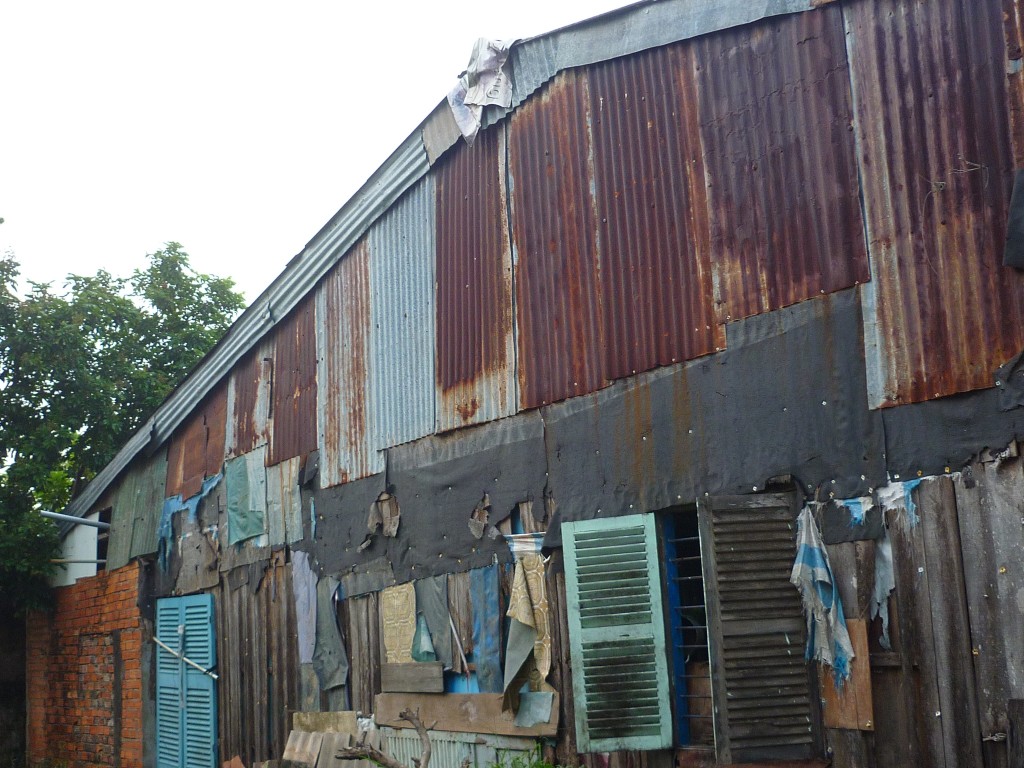 A shack bar selling bia hoi in My tho Vietnam

Looking around in residential areas away from tourist destinations is truly fascinating. Sure it is not historical or a place of natural interest.  However it is real.  Walking down the road and seeing everyday life is where it is at and where you can learn the most.  Leave the book behind, walk past the monument or temple and keep going until you are hanging out with the locals. 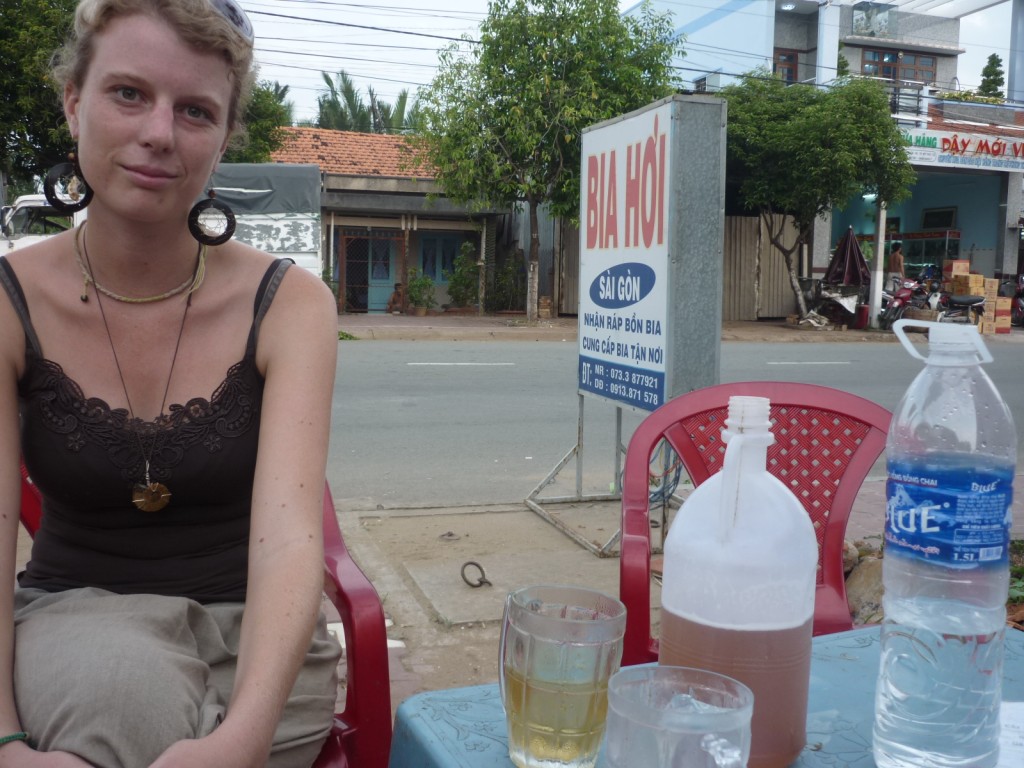 We eventually saw a sign for “Bia Hoi”, which is the daily “house beer” made in each establishment. It is often fairly poorly filtered and still contains sediment. This particular Bia hoi was served in 1 liter water bottles and cost just 6,000VND, which is an incredible 16p/ liter!  The place looked like it was literally pulled together from a rubbish dump, as rubber mats and carpet hung to the outside wall. We sat down to take our breath under the mid afternoon sun and soon a dumpy lady came out to take our order. 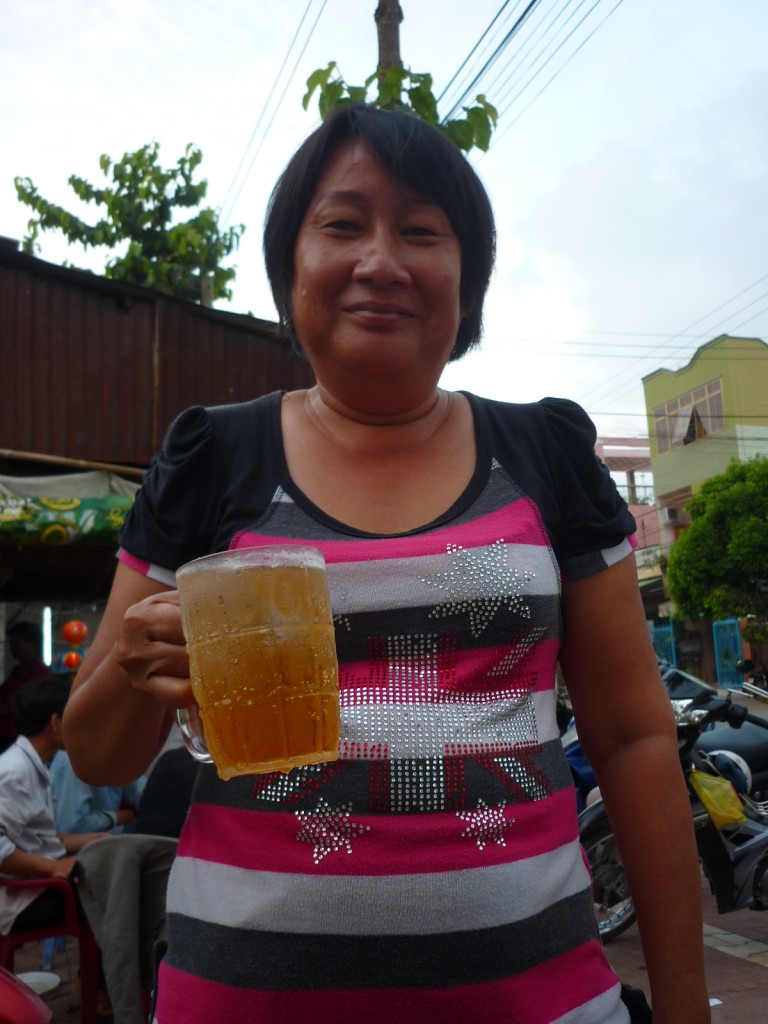 Now its my turn to drink- My Tho, Vietnam

She smiled and was enthusiastic as we ordered in Vietnamese and soon returned with 2 bottles of beer and freezer cooled glasses with ice. Soon people started emerging from the inside, supported by cheers and squeals of delight, as they encouraged the interaction with the foreigners. 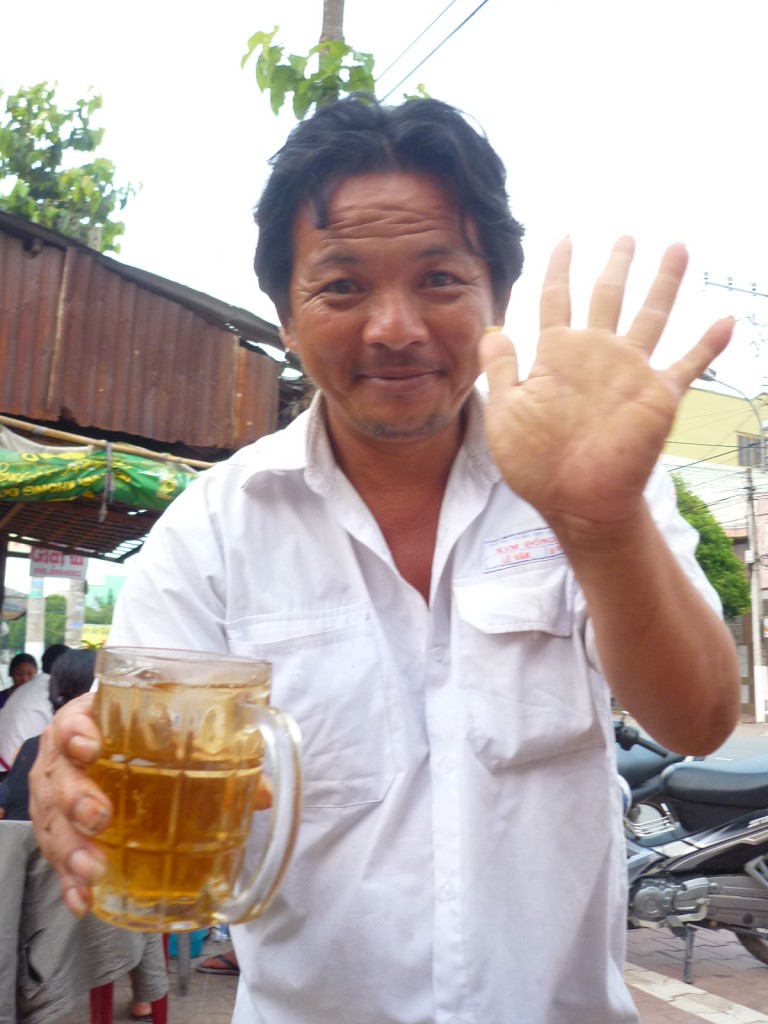 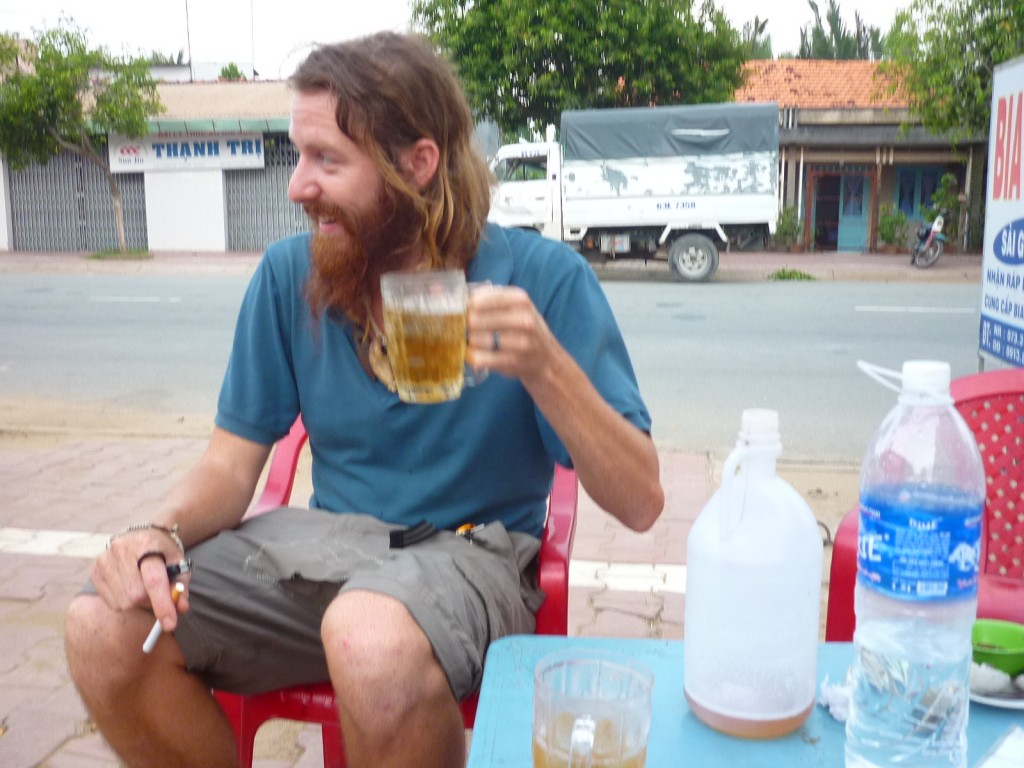 The first man came out and held his beer in the air “Mo, ha, bat YO!” he cried before downing his beer. Then it was our turn. Fine. The beer was a little crude and hard to finish, but we managed. The next person emerged and did the same. Another person was then followed by the first person, which we realised would then repeat as we started to struggle finishing the beers off on each occasion. The insistence made it hard to refuse however.

Everyone was clearly talking about the situation inside and were having fun. Next emerged a “royal egg”, which is essentially fermented and smells like an eggy fart gone wrong, with a purple yolk and a greenish white. All in all, all shades of wrong. I was offered the eggs as a “beer snack”. I pride myself in trying anything. Yet with a stomach full of beer, fizz and sediment, sat in the heat stability was not my middle name at that point and eating fermented eggs would have been a bad choice.

After kindly diffusing that situation we sat and relaxed for a while as the thunder clouds brewed. Soon it started spitting and in literally a few minutes the sky was black, the wind hit and the rain pelted us, as everyone erupted in a flurry of action batting down the hatches and removing the parasols. 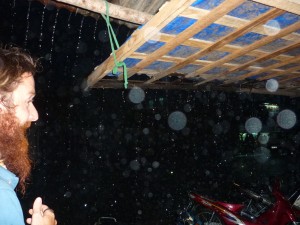 We were ushered inside surrounded by smiling faces as everyone looks awake after the burst of action. It was not possible to leave for 3 hours as the rain was relentless.

We sat inside speaking our broken Vietnamese center of attention with the small group of what was clearly a regular group of drinkers. A strange collective including a very drunk man, who was continually told off for causing mischievous trouble.

We spent 7 hours with this unlikely group in the end, learnt new phrases and words to add to our expanding knowledge.

It was brilliant knowing that this was as local a venue as you could have found here and that we had full attention of everyone. It was a really random situation and completely unexpected. Those are the situations that tend to be the most interesting, especially in a ramshackle hut of recycled odds and ends as well as some spacial definition from crudely laid concrete. 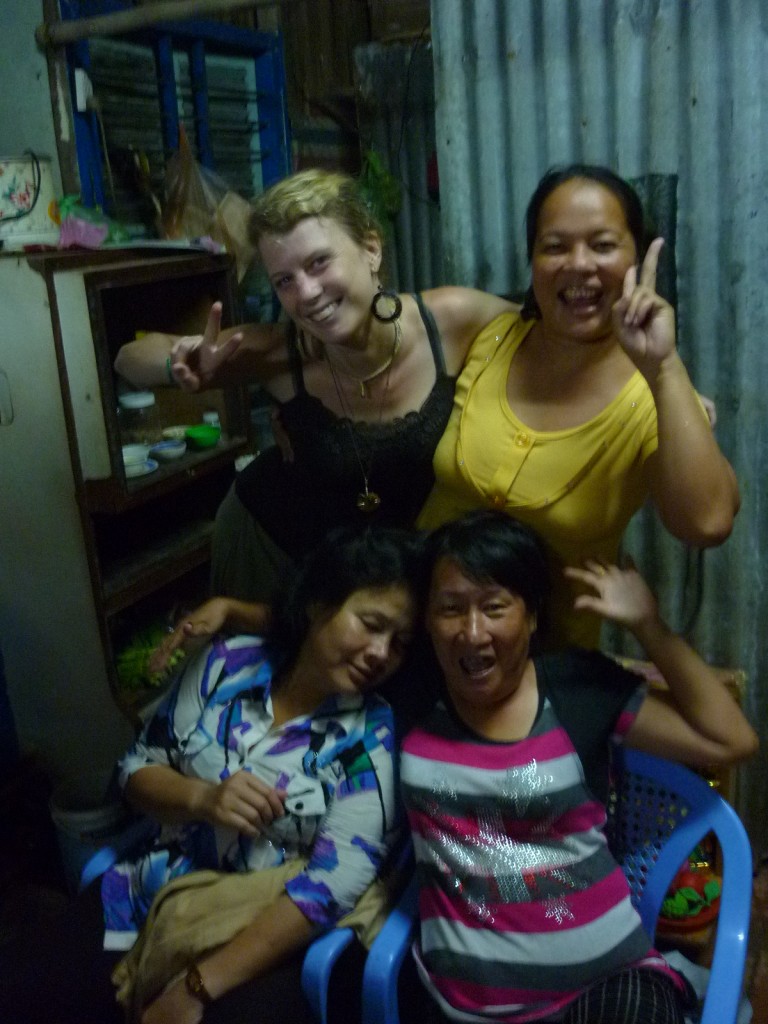 Drinks in the dry, hanging out with the locals in My Tho

You needed to rest the door over the hole through lack of hinges. An iridescent strip light lit up a cracked cabinet that held some beer snacks, the eggs that we had been offered earlier (which had been returned to the cabinet) and cigarettes. 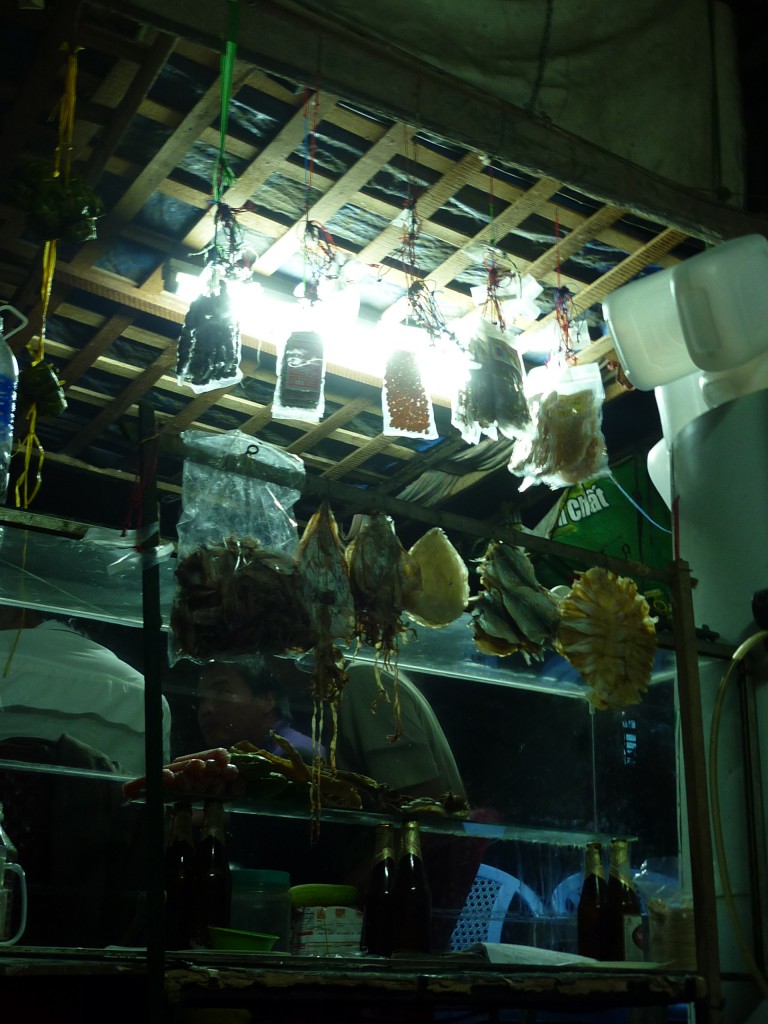 A usual frontage in a Bia hoi bar

We eventually had to leave against our will as it was now late and dark and flooding. The water was halfway up our legs and we didn’t really know the way back. We staggered down the road the direction that felt ‘right’. People hammered along in their motorbikes to make sure they made it through without stalling as the lightning continued to pulse overhead. 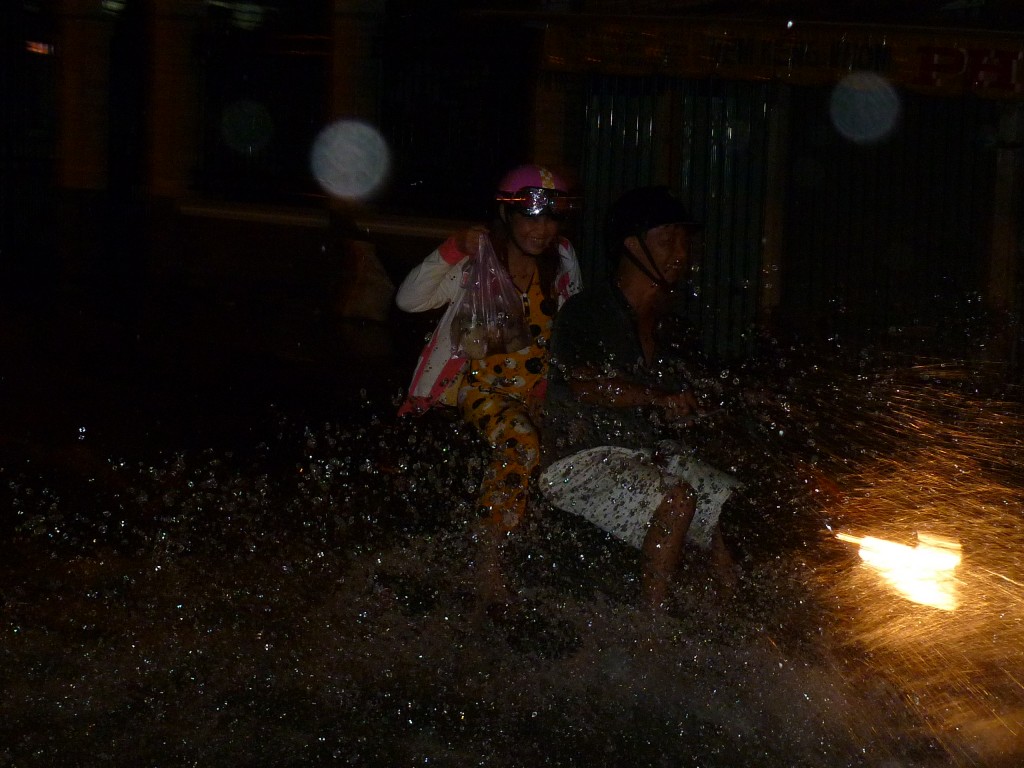 When it rains it pours in the monsoon

It took us around an hour to get back, asking as many people en route as possible which direction the Mekong was. Unfortunately this didn’t seem to be an important landmark to people, even those working in a restaurant with “Mekong” in the title…

We made it back absolute soaked, pounding heads, dazed and exhilarated  That is the kind of memory that stays with you. Touched by people and a sense of place.