The East Coast and Hue

Our friends of Hanoi

As we were due to arrive in Hanoi late and the likelihood of hostels being closed for the night, we pre-booked using Hostelbookers, which is far easier to use than Hostelworld (yes, we have used both a few times).  Our A/C, luxury taxi took us to the door, where we were greeted well, but with some bad news.  People in our room were sick and failed to check out. The owner had to move us, but paid for our taxi journey from the airport, which turned out was not included and negotiated the same room rate as we were due to pay. Just around the corner the receptionist came with us and introduced us to our new hotel. Suspicious we went to our room, but were delighted when we found a large room with 2 double beds, TV, fridge and A/C.  Much better than a dorm room, with potential drunkards and snorers, which we were wearing on us at this point for sure!

The next day, as always with a new city saw us pick up a free paper map and head out on foot to have a look around. We were excited. More excited than we had been for the last 2 months or so.  We felt like we were finally in Asia. Laura was all eyes, darting from the shops selling various things, the street stalls selling drinks and street food, to the bike’s overloaded with seemingly random items.  It was a glorious day and we were soon sweating, appreciating the fact that we were back in a humid sub-tropical climate.  Skirting around the citadel and looking at the various embassies to just walking and winding, through the impromptu turns we made.  We walked past the war museum with its guard tower built in the mid 1900’s, but were not motivated to enter. 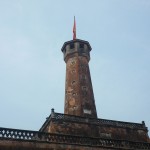 Laura soon understood the method for crossing the road: walk at a steady pace, don’t jump back suddenly, look at the oncoming traffic directly. As people here have been driving a moto bike with no rules to the road for so long, they move around you with ease. The key is not to get scared!  Vietnam has everything happening, in all directions at once. The traffic is one example. The train line running through the city, directly in front of shops, with carts being pushed down them is another.  Small alleys hiding shopfronts and windows from unrelated buildings and the mixture of modern block designs and French colonial architecture, gives the place a richness and character.  Already tired we had our first Vietnamese coffee, served short and thick, but sweet. The first of many.

Retiring to our hotel for a rest before night we enquired as to where the local food was served and in addition were directed to a night market.  The market street was ablaze with colour, lanterns, kites, cheap clothes, food stalls all intermingled. 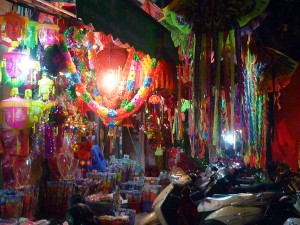 Before retiring we first experienced the Vietnamese firewall preventing access to social media sites, but with a proxy detour managed to send a message to an old friend who have been living in Hanoi for over 4 years, to meet up. In the meantime however we heard from a girl we had met in India and arranged to meet her the next evening by the central cathedral.

We were advised to check out the lake “Ho Hoan Kiem”. Bang smack in the middle of the city it provides a relatively clam refuge from the surrounding traffic. We meandered around took in the archways and statues commemorating the successes of Ho Chi Min and the countries scholars, witnessed pre-wedding photos being taken that are always traditionally taken before to the big day. 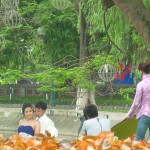 We looked at the temple on the lake, but decided against spending 15,000 dong (45p) on going inside as we were bound to see many more and the format of Buddhist temples are almost identical.  Instead we found the booking office for the water puppet show that is a primary tourist attraction and after booking that for an hour before our meeting that night we just kept wandering, eventually reaching the temple of literature.

A really beautiful place and truly interesting to understand the education program of the 10th century, dedicated to Confucius and built as the “royal academy” for the training and examination of top doctors and academics since 1076. As it is still used as an education centre today it is really one of the sights that need to be seen in Hanoi.  On the below picture it is worthy of note that animals have symbiology, the turtle being longevity. 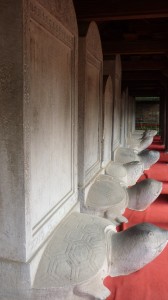 We buzzed back to the hotel for a brief rest before heading back to the centre for the puppet show. This is a good thing, and a “siesta” is noted by all Vietnamese people, as the weather removes all your energy. Walking around all day in the heat here is unsustainable.

We had a pre-show snack of summer rolls a Vietnamese specialty, which Laura loves.  Very typically Vietnamese in that it is fresh and healthy food. 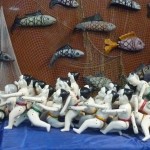 The puppet show was full despite having run for years, filled with tourists all waving around video cameras and sending strobe like flashing onto the stage at every moment. I am not sure they had time to enjoy the show. Our only real record was of this beautiful introductory piece.

Typically early we sat on the steps of the church and waited for Stephanie, as she arrived it wasn’t long before we realised that we had been locked in the groups of the church. After spearing my foot in India scaling spiked fencing we had our first 20 minutes catch up behind bars while amused onlookers drank their evening beers.  It was great to catch up and see someone on our travels that we had met previously on the same, long journey. We had dinner in an empty restaurant. Neglected any real service meant we didn’t receive what we ordered really and so gave the new price we would pay. Confusion reigned and the completely unintelligible man started looking at us for direction of what we needed to pay and get back. We did this fairly, but this was a reminder to me of the numerous occasions in Vietnam, where people over or under charge due to their terrible maths skills.

Stephanie went home due to work the next day, but we went next door for some cheap beers in what was backpacker row. A garish street that we would avoid otherwise if it were not for the drinks promotions. We watched a group of locals gambling with cards and then a sudden contrast as a group of around 25 westerners all following each other in tight jean hot-pants, loose tops and I [heart Vietnam T-shirts]. One guy even looked at us and made a sheep cry, realising our view.  About to leave the bar a few of these guys came back and wanted to join us, to which we obliged. We soon heard their stories of going on various tours and their activities in each place. We realise more and more how much we just like hanging out, trying to speak to the locals, avoiding “follow me” tours and areas jammed with tourists. We also realised how much people claim the same, but don’t seem to do what they say. Are we becoming travel snobs?

After a communication error we finally managed to reach Sam on his mobile and arranged to meet him in the same place the following evening. Another day of cruising and trying the variety of street food. We were only productive in the sense that despite booking a train to Sa Pa, we decided from numerous sources that it was heavily touristy and that the minority villages that make up such a part of the interest of the area is now contrived by the locals as a money spinner. 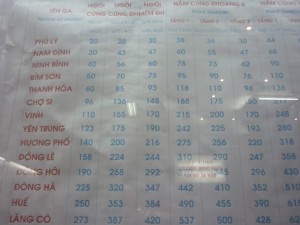 We do not feel it is ethical to take part in a cultural exposure exercise enough to warrant going and agreed we would just head somewhere random.  Instead we booked a train to Hue, halfway down the coast for Monday 23rd. 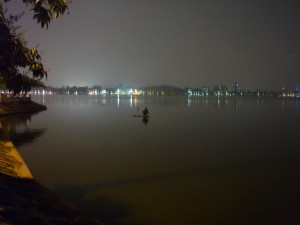 At 7pm we were whisked off to West Lake with Sam and his girlfriend Saori, where he knew a good spot to watch the sun set with a beer. It is interesting that from our conversations and friends that joined us later, how much ex-pats stick together. It is natural I guess, but hearing of the numerous differences between the expectations of you as a Vietnamese person versus in our own country made you realise how different schedules we were on. Vietnamese people get up at 5am and do some exercise, then have a lazy day of work as despite having few customers people are still paid to stay and never per hour. So many workers just sit around all day, in numbers, waiting for something to happen. Dinner is at 5-6pm and then bed at 9pm. Vietnam doesn’t have the late night drinking culture we do.

An interesting night catching up and learning about the country from a foreigner’s point of view, and greater insight than we could hope for in our single month.  We updated Sam with our news that we were no longer heading to Sa Pa and would be around the next day for his Birthday. He also agreed to let us stay at his flat, lent to him by the school he teaches at. This would help our budget and enable us to afford the kind of establishment ex-pats in Vietnam frequent, and they are not cheap in local standards! 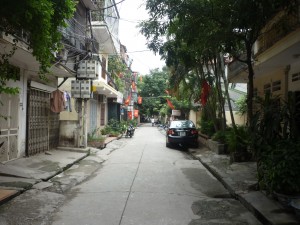 So the following morning we packed up and I met Sam t0 pick up the keys, a bike ride to introduce us to the house, bike back and a taxi there again we rested feeling hungover until that evening. Evening came quickly again and we were out waiting in the agreed bar for everyone to arrive. A good night had by all and time flew until it was time to swap bars at midnight. The ex-pat community is clearly close and draws closer the longer you stay in a place. It must be strange though having such a transient community around you.

The next day was unavoidably recovery. My infected and irritated feet needed more tender loving care. A month on and they were still in a bad way. An iodine soak and complete bandaging was the next way to up the game on recovery so that I looked like a war veteran.  That evening we were invited to another event, this time “Electro Picnic” organised by one of the guys we met the other night in a plush restaurant. Only 6 out of many showed up, but it was good to relax in the setting sun and drink coconut water, the sweetest and most full we have tried to date. We had soon survived as long as we could and headed separate ways to bed. We picked up a pizza after an unfulfilling “Phu” (Vietnamese soup) and watched a film until we slept.  Home comfort when suffering is divine.

Our last day in Hanoi arrived and just before we headed off for our afternoon train Sam treated us to lunch at another ex-pat joint and to a massive beef burger. Clearly home comforts are necessary sometimes, even if one does love the new culture they have entered, which Sam truly does.

A great send off in preparation for a 14 hour train journey.