Our final week in Fiji 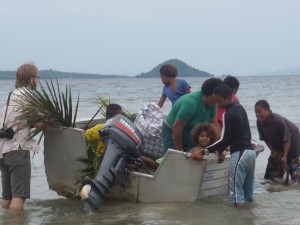 All aboard! Heading back to the main island

Al, Pietro and I caught a small chartered boat back to Taveuni and then a taxi to Nagala Bay to head back to the main island for our final week in Fiji. The taxi was full of India-Fijians who reminded me of the Indians we encountered in India. Loud and dominant. They took over our 8 seater taxi for about half an hour. Al and I secretly smiled knowingly of their ways.

As we headed straight for the top deck of the SOFI boat this time, we found Si and Immy already comfortable up there. It seemed they had taken our advice not to bother with the cockroach ridden lower deck. We enjoyed filling them in on the progress made at Qamea with the planting. Whilst they told us about their beautiful camping spot in Taveuni they had found. Docking in at Savusavu Bay, 6hours into the journey, Si and Al made a beer run to the village whilst the boat docked for an hour. So we had an evening of beer with a stunning sunset. On our crossing back we also bumped into some of the backpackers that had been in Maqai Eco Beach Resort on Qamae. We heard all about their experience too. They had planned excursions to little islands with much more time snorkeling, coming across a hammerhead shark at one point. Their time sounded fantastic, however we did not regret what we had done. It was nice for our activities not to be planned and keyed towards tourists with big groups of backpackers. 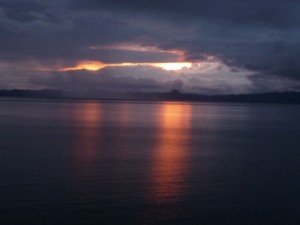 Sunrise over the Fijian seas

It was a much more pleasant crossing on the way back to Suva,Viti Levu. The sea was much calmer and Si lent me a blanket to make the wooden bench a little more bearable. Plus, we were wiser and brought better pillow making materials this time (not a loaf of bread!). In the morning we awoke to the sunrise, but this time docked immediately so to me the journey didn’t feel nearly as long.  We were back to civilisation and ready for a fair normal time for our final week in Fiji.

We got our bags fairly quickly from the storage area and said our goodbyes. We decided to head straight to Nadi and spend the remaining couple of nights there before catching our flight to Brisbane. A couple, Matt and Izzy, who had been on Maqai Eco Beach Resort were also going to Nadi and recommended a hostel we had heard about from Adam. We decided to catch the bus with them. However,reaching the bus station, they were less inclined to get the local bus with us, and caught a taxi there. We were a little surprised as it was such a little effort to catch a bus which was 1.70 FJ Dollars compared to 6FJ Dollars. With about 3 minutes to spare before the bus left the station to Nadi, we bought our tickets and I legged it to the bakery across the road for a fresh  individual chicken pie for breakfast. With a 4hour drive, it was a necessary move!

Reaching Nadi, it was about 12pm, humid and hot. We all got into a taxi with a few more backpackers heading to the same hostel. Arriving at Bamboo Hostel we paid upfront for 2 nights (15FJ$ pp/n) for a mixed dorm.

The main focal area at the hostel was a volleyball court and open cafe area. It seemed like a relatively nice place to hang out, despite having to dodge the volleyball which often came flying into the seating area. It was totally geared towards backpackers so everyone there tended to be on a world trip either going to Australia next or at the end of their around-the-world trip. There were so many young English couples who had ‘done’ Asia and the Pacific, who were either heading back to the UK imminently or had a last stop in LA. It was good to hear about other travel experiences in Asia and get some tips.

The hostel was one road away from the beach, but of course nothing could quite match up to where we had just been. The beach was dirty with bits of glass bottles poking through the sand. The hostel was a nice enough place to hang out for a couple of days, but it wasn’t somewhere I could have stayed for long. The only affordable food was at the hostel, surrounding resorts were expensive. I realised how difficult to backpack in Fiji on a real budget without volunteering or using something like couchsurfing.

Our first evening at the hostel was fun though. We spent time chatting to our new backpacker friends and I even met a Brightonian who used to live on the same street as my uni house. The hostel supplied free kava and live music, so Al and I indulged in what was our last kava session. Fun, but slightly ruined by a young English girl who decided to have a video skype call to her ‘bezzie mate’ on her posh phone whilst in the kava circle. I was so happy that our kava experienced had been predominantly with locals and not just a put-on event for tourists.

With a late night and a very stuffy room (air-conditioning wasn’t working) we had a very slow last day at the hostel.  I took a dip in the not so clean water at the beach and spent most of my say chatting with Matt and Izzy whilst Al recovered in bed. The mosquito bites had taken hold and were very infected on Al’s feet which didn’t help his overall feeling of health that day. My elbow was also swollen and hurting from infected bites. There was no let up on the mosquito population in Nadi either. They were everywhere and extremely resilient. It was a shame as it was beginning to bring us down and it was hard to completely relax with them buzzing around us. 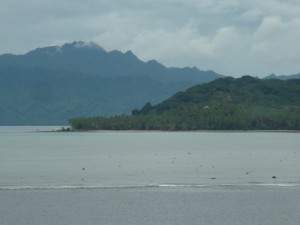 All the backpackers we had befriended had flights the night before us, so we said our goodbyes and had a quite evening watching the sun set on the Pacific for the last time in what we anticipated to be a while.

On our final afternoon we used found an internet cafe in town to update our blog then caught a cab to the airport. We were going to Brisbane for 24hours. It was a compulsory stop with our Around the World Ticket ticket. Australia was not somewhere on our destination wish list, but my good old friend Andisha lived in Brisbane so I was actually very excited to arrive and stay with my friend for the night. At the airport we had trouble checking-in as we found out that if we stay in Australia (airport or beyond) for more than 8hrs we had to buy a visitors visa. Very begrudgingly we coughed up 100FJ$ each so we could get check in. It was all very baffling, we felt that this was a significant detail that Around the World Travel had failed to tell us. Air Pacific of told us it was up to our tour agent to buy this for us. The time old tale of companies pointing the finger at each other was bound to be the outcome we thought to ourselves.

As we departed to our next destination we could not believe that our time in Fiji was up. It had gone so quickly, scarily so..before we know it we would be in Hong Kong we thought!