Northern China Over the Himalayas

So can you guess which way I chose?

I arrived in Xi’an in Northern China after another 16 hour 12 hour bus journey (they promised 12 hours, but of course it took a lot longer)… the bus hammered it west all night. China ended up passing in a blur, but I made an entire 10 degrees westerly travel during the journey. 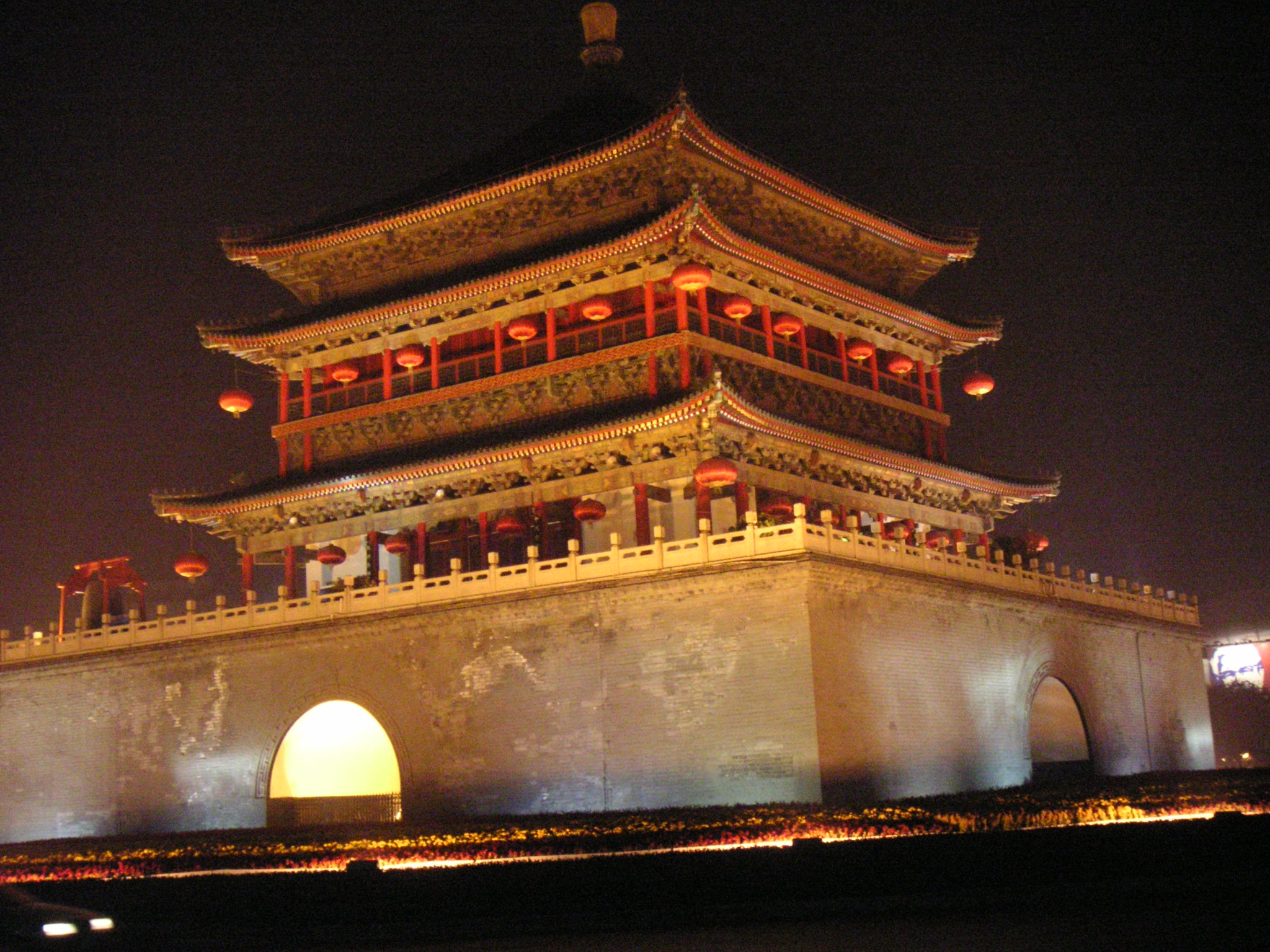 In the morning the view looked pretty much like it did the evening before- endless construction and development. No countryside at all, so it made no difference that I travelled at night, but it was such a shame that there was nothing to miss.  It is incredible to think that this kind of mass scale development occurred for such a long period of time and over such a wide area.  China is booming.  I had to stay a week while my new visa was processed. I was paying heavily for a series of logistical errors on my part. I could have got a 3 month multi-entry visa at the outset but I was ill informed in Cambodia. A visa extension is in fact a new visa and ended up costing me 30US$ and 30 days means that you get 30 more days from when you apply, not when they give you the passport back with the stamp in it… typical bureaucracy and really annoying! Despite all this time on the road I am still learning even after so long.  Every day is a school day when you are travelling and you never get to the point where you get everything right.  You just need to be as aware as possible, informed by many sources and get a little lucky.

I was not so keen on Xi’an but grew to like it. I hung out with Jenni who worked the reception desk at the hostel I stayed at.  We went to the Shaanxi history museum and ate wonderful noodle dishes all meat and egg free. When she was not working I taught her German. 3 days before the visa was due back I booked an onward train ticket to Lanzhou (103 E).

Lightening my load still further I gave Jenni my Cambodia T-shirt and left behind my donated TNF zip offs…. they gave no warmth and hence were of no value.  A long hug goodbye to Jenni and the train onwards called all through the night again and then 2 buses across town to take another to Xiahe (2920m) notable for the Labrang monastry and cooler weather…. was pouring down and just 7C, which was freezing as I was very unused to such temperatures. I hung out with two girls from Beijing, Bobby (who donated me her yellow down sleeveless vest and invited me to dinner, and her travel friend Melanie. When they left I hiked alone up a steep valley for some immense views and sat on a rock thinking about my route and how Northern China differs from the East until I got too cold. I could see snow in the distance…. winter was coming.  I thoroughly enjoyed Xiahe.  It was a serene place, peaceful and the town was full with Tibetans and monks. It was a bit like the wild west but without the gun fire.

Back down the valley inoto Lanzhou city whose claim to fame is one of the most polluted cities in the world….. my lungs were hurting even in the 2 hours I waited there. I finally took the train through the night up the Hexi corridor (part of the northern silk road) to Dunhuang (40.09N 94.40E). It suddenly seemed incredible that I have covered almost all of China horizontally and oh my word its a long way! Bletchley, my “home town” is 51.99N 0.732 W and still a very long way to go but I am getting there with no worries. It is sometimes difficult to fathom how far you have come and not to think about where you have come from, what is for you back there and to put everything into relative perspective.

Dunhuang is an oasis on the old Silk Road in Northern China and it is hard to imagine how it used to be in days gone by.  Silk and salt and who knows what else. Now it’s all coal, power stations and petro-chemical plants, especially brought in from Inner Mongolia to power the exponential growth of this new power house of a country that China has become. It really is an incredible route that shows what is really going on here. Dawn broke a lot later and the scenery was flat as I reached the desert.  The sun rise is magic here and so intense and it reminds me of Morocco- the desert oasis of Zagora, yet no where near as cute. The days in Xiahe were like being in Todra…..(I like Morocco very much)….. the feeling I had there; satisfied, open, intrigued.

The oasis of Dunhuang

On the first day I spent 3 hours on the internet collecting info for the days ahead and sending messages….and the replies I received were very encouraging, and this is where I decided on which route to take: Option 3

I finally bought a dust mask but it was a bit like the “shutting the stable doors after the horses have bolted” as my throat was dry and my nose blocked from the dust and pollution.  I took a tour to some ancient ruins on the “Silk” road out of town. It was great. Spectacular flat and desert like scenery blending together and conjuring all kinds of images.  I then spent a night, October 1st, my 488th day of travels (16 months) in the desert dunes just south of town after a camel ride sunset/sunrise trip. The sun rise was again wonderful.  Northern China is freezing cold in the early morning though, but the night was cozy in my old sleeping bag with 2 ex army bags and a great Chinese over coat as an under blanket.  I slept like a baby, which surprised even me!  That night with the sand still in my hair I took a night bus to Turpan.

Yes, that’s where the Turpan depression is found. A salt/mud dry lake south of town, 154m below sea level… I didn’t go as I had arrived with a 2 french people and we cycled out to the Emin ‘minaret’ or mosque dating from 1777.  It is truly Afghani in style and was apparently the tallest in China! It was nice as in fact Chinese is no more the only language and this is actually Muslim country! Everywhere now is Arabic script alongside Chinese characters. It is incredible to see that on the border lands how cultures and society cross over so much.

We biked around the back streets but I wanted to push on and went to Urumqi the next day, which is just a short hop of 2.5 hours.  I wanted to go to the TianChi lake, but have started hating the Chinese way for everything that is worth seeing there is a high entrance fee. Over time this makes me feel resentful, like I shouldn’t have to pay to see nature and will simply not pay 10 Euros for something I can see for free in most places. Instead I went out to the National museum.

Urumqi, or Wu lu mu qi as the locals call it is really a transport hub. The overland routes from Kazaksthan and Kashgar, Islamabad, Bishkek merge here. Its become yet another mega city and this one was as boring as hell. Two days was far too long, but as it was the holiday week I had booked a train ticket out on the day that I had arrived and spent the 2nd day waiting! Now, alongside the Chinese and Arabic there was Russian. 26 hours to Kashi on a we went through the middle of no where. In fact there’s a lot to see in the middle of no where. Normal and unremarkable is often the most interesting thing of them all, especially it seems in remote Northern China. For the first 12 hours I was looking out the window, changing from endless flat plains with dust and rubble, then just our train curling around a bend, to a wide gorge. 5km wide with a river and trees with golden leaves, mountains rising high above, some with snow. Birds and butterflies and then a high level plateau with telegraph poles, a dirt road, a few yak herder villages. What a great day and scenery! We arrived exactly on time at 10:34. How on earth I don’t know but we did.  Imagine- 26 hours and on time! Well it is difficult to comprehend if you have not travelled that far, but it has not to my memory happened once for a journey of this length. Well it may have, but it is pretty much unheard of.

Kashi/kashgar is more Muslim than Chinese. I stayed at the Old Town Hostel with a great courtyard and lots of ‘overlanders’, mostly on bicycles having come from Europe; Switzerland, Belgium, Austria.  Everyone was going there own ways across China. Some had shipped the bikes to Chengdu while others were gonna be roughing it out, probably thru the coming winter, across China.  The ones going to Pakistan had left the day before I arrived. The Chinese had closed all land borders because it was the holiday week starting the Saturday before with Independence day and should be open again by the time they arrive. As noted in the pre-planning stage of this trip, you first had to go to Tashkurgan in West- Northern China and then continue to Sost, which is on the boarder in Pakistan via the Khunjerav Pass the next day. I went out to the bus terminal and got a ticket. This gave me only one day here sadly. Unfortunately sometimes you have to move- you win some you loose some. As I was told that there was no bus scheduled for the Monday,  only the Sunday, which was the next day, October 9.  I  did not, nor at this point could really afford the time to wait.  For me getting across the border was paramount. The punishing winter is coming that’s for sure and I didn’t want to have to back track to Wulumuqi for an international flight out or wait in a boring city for a visa to Kazaksthan (option 1) because the pass was currently closed for the winter.  This means that even if I could have past through Northern China over the Himalayas this way, then it would have been treacherous at best, but realistically would have been impossible and added days of time plus the huge expense of heading back and having to fly.