We headed back with Ben in the bus and then to the place where he was to pick up the “Juicy” camper van. Another good weather day was in progress, which was good as it was supposed to be getting into the rubbish weather season. 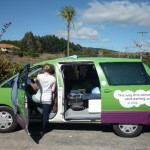 We learnt that it was Ben’s girlfriends Birthday the day before we left Vipassana and so he was going to create the 10 days of Birthdays to make up for it. Each day with a new surprise. We were told that Hamilton was a dull place to go and advised that where Ben was going was best to see. She didn’t know we would be coming, but that would be fine. First to stock up on stuff to eat and goodies we would need for B’s Birthday.

A food shop picking up some famous New Zealand wine and other food stuffs, mostly comprised of cheap noodles and soup, in a supermarket that has everything you need gave you the realisation that this is part of the face of the western world. Availability and convenience. We headed off on time by couldn’t pass by a KFC en route to damage our 10 days of vegetarianism with some greese. We needed it, felt bad, but not really that bad. We then cracked open a beer to seal our return to the outside, “real world”.

Heading out of town south the country opened up into some of the lushes green grass I have seen, and apparently the most nutritious available in the world for cows. Ben told us about his business model of quirky races in Queenstown and made us realise the amount of gimmicky activities that are available to tourists here, produced and sold out of nothing, but cross promotion.

Do even the roadsigns in New Zealand suggest this?

We past a group of cars waiting by the railway line and stopped to witness the passing of the steam train that has been refurbished as a tourist train south, before getting back on the road. The towns we past were distinctly western. Wide open well tarmaced roads stretching between hills of more green.  A fence with “Ken Grishton owes me $400, still waiting Ken” spray painted over it maked me wonder whether the country folk were as strange as in other countries. Many of the small towns we past were devoid of character, bar the countryside the were carved into.  The grey weather and drizzle reminded us again of the UK and as the sun set we raced on to get to the park that B was staying in before it was too late.  The phone ran out of battery en route and the roads were not clear, so there was a time of uncertainty about whether we would make it. Our new motto of “Anicha”, which means continual change and newly formed understanding that worrying about a situation is unproductive can into effect, but towards the end was already waning.

After our little adventure of finding the hostel destination in the park we finally arrived in darkness as a cold drizzle fell. The plan was to prepare a chocolate dip for B and do this while Ben was catching up. B still had no idea we were there, so hopefully our contribution to things would prove a nice gesture and she wouldn’t mind us hanging out too! We did feel a little guilty at crashing their party so to speak, but Ben was insistant and this made our lives so much easier and open to our fate, governed by B’s Birthday wishes and the things that ended up getting arranged as part of her 10 days of surprises. This is the kind of randomness we love and as yet we have found that New Zealand has lacked the kind of uncertainty and confusion that arises in many other countries and so we have to make our own. To be fair we never planned to come to the park and so this is pretty random!

The hotel B was staying at unfortunately turned out to be 30NZ$ (at 2.1 to the pound that is about 15 quid), which is not healthy on the budget department. We left only 2 weeks in New Zealand due to our keenness to get to Asia and because of the high prices and so this is painful. We were extremely grateful when Ben gave up the camper so we could stay in that and he could share the room with B. We have ended up doing the typical NZ backpacker thing of getting a camper out by default. Quality! Feeling a bit ill though we crawled in to say hello and meet B after strawberries and chocolate were revealed and felt like we were in the middle of the wilderness on base camp in a log cabin as that was pretty much what it was. Crackling log fire coffee bar and wood walls. We retired early and dug into the cold van and awoke to freezing rain and eventually snow! We are not used to this cold for sure. The park is famed for the mountain, which doubled up as Mordor in Lord of the Rings film and many people now come to walk across. In this weather though it is a case of camping in with the ubiquitous “flat white” coffee throwing some bananas on the fire we had bought from the supermarket and eating some old baguette.

A pleasant day was spent chatting and relaxing, while gazing at the thick snow coming down over the heather and gorse trees dotted over the hills. Eventually though things cleared and we made a dash to Taupo where B’s next treat was in store.

We sat in the back of the van supplying food and drinks from the back finally seeing some of the rolling lush green landscape broken up by jagged boulders. It felt like an English countryside.

We arrived in Taupo and were taken to a Spa where B was treated to a 1.5 hour of massage and natural mineral pool. We went to see h0w much things were and ended up realising that the private pools were not manned at all and so grabbed our swim stuff and just nabbed one, locking the door behind us. We had a natural spa, with 35C water in a room to ourselves for 1.5 hours of pure relaxation and cleansing until we got dressed again and emerged like nothing had happened. Back to the van for a cup of tea and waited until we were reunited and pulled into the holiday park spa to watch the sun come out over Taupo lake, with the snowy peaks in the distance.

After a bottle of white wine and olives sat in a chilly breeze presiding over the town we continued feeling privileged at what we were doing on such little cost. It is hard to do things and to enjoy New Zealand without a fair amount of cash and so we were definitely in a sweet spot at being able to do all of this pretty much free. We then drive to a hostel, part of a chain that Ben works for and can get discounts, as is clear is possible for him to achieve with a fair amount of things. The tourism industry is driven by kickbacks and freebies for industry workers and so Ben was on the phone a lot to see what he can swing.  In the case of Urban retreat it was a free space to park the van.

The place luckily was the cheapest in town (26NZ$) and attracted the usual full contingent of backpackers. Mostly people from the UK seemed attracted to New Zealand as opposed to other countries. Each country seems to have their own majority of where their backpackers originate. Perhaps it is due to the similar climate and language breeding the familiarity that most people enjoy, while “experiencing new things”. With their own bar and food menu that caters for the backpacker a massive pin board packed with garish flyers advertising the vast number of different activities that is pos