La Paz to Uyuni via Oruro

Making our way to Oruro

With the intention of esc aping La Paz befor 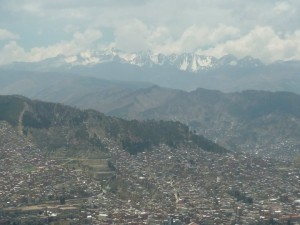 e it sucked us in, we checked out and managed to catch a bus to Oruro by 11am. There are so many buses it seems, that it was a very easy process. Before we knew it we were driving in the outskirts of La Paz, appreciating a fantastic view of the entire city as the bus crawled up and out. With what appeared to be rush hour, many colectivos (public mini vans) clogged up the roads and it took about an hour to get on the road to our next destination. Watching locals go about their daily business for that hour, and watching them catch the appropriate colectivos was real entertainment.

Unfortunately, the bus company we were using had a different idea of¨entertainment for our 4hour journey. We had managed to sit under the speakers for the tv and radio, so we had to endure very loud traditional music, along with the sound of a really violent film that the driver decided to play. Arrrgh! I was a bit shocked with the film choice, it was only 11:30am, and there were plenty of little kids on the bus, who all seemed captivated by the constant shooting and death scenes. I personally was much more captivated with the view outside the window and tried my hardest to block out the god awful noise.

Just outside of La Paz we drove through a notorious area called El Alto. It is a 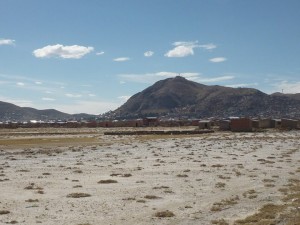 rapidly expanding area which is very unsafe. There had been stories of tourists having been taken to this area and robbed at gunpoint. The view of the this area, was different to what I had imagined however. It was a vast expanse of nothingness. Only a few brickwalls around designated land, really basic accommodation, and by the look of it, to sewage system, and probably hardly any water. It was a dry barren landscape with nothing on the horizon other than hills of dry unworkable land.

The road to Oruro was paved all the way and pretty much straight. It should have been one of the easier journeys, but with the endurance of loud films and really bad plinky plonky repetitive Bolivian music, 4hrs felt like 10hrs when we landed in Oruro. First impressions of the town weren´t good as the outskirts we drove through was a slum area with bad water management (flooded areas of what looked like ruins, but was actaully housing), however the town itself turned out to be a much nicer place. Oruro used to be a gold mining town, and was still a major through-route. The reason we had come here was to catch a train tp Uyuni, that major starting place for tours for Salar Uyuni.

After finding some basic accommodation, it felt like we were in a prison camp, we spent the rest of the day looking around the town. It sounds like a crap ho 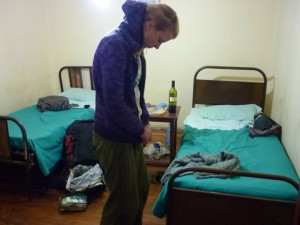 tel, and it was, with no running water to flush the toilet. However, Al and I both felt a pang of excitement. It was that feeling of how we had felt in India. I think it is that fact that when we are put out of our comfort zone it really gives us that challenge to endure, survive and manage with the basics, without the comforts of the western world. It was nice to finally feel a slight challenge, after a month in Peru, where it felt that they tourists were catered for and life was made to easy, comparativley to the standard of living for local people.

With our accommodation sorted, train tickets bought we wondered towards the market area nearby. The markets Bolivia were beginning to be a major attraction for us. Similar to La Paz, everything and anything can be found. All of the zones of the market contained to different areas. Juices stands all together, chicken and chips together, sunglasses, hats, clothes, meats, veg, fruit; all in the designated areas. It became apparent during our explore around town, that this organised way of containing services to certain areas extended to the services and functions of each area of town. There were whole roads full of solicitors, funeral and wedding organisers, administrative shops, cafes, fast food restaurants and furniture shops. We contemplated why the roads weren´t named after the predominant service they provided, rather than yet another Calle Boliviar, for example. They were almost at the ultimate organised town!

We sourced out a restaurant written in our tour book that was meant to have a really good almuerzo (lunch menu). We were told that it cost 17 Bolivianos (GBP1.7). This seemed like a great deal, so intended to come the following day before catching out train to Uyuni.

That evening, we shared a ready made bottle of cubre libre in our prison cell, put the world to right and had a surprisingly comfortable sleep. The following day we picked up snacks for our impending train journey, and headed to the restaurant for almuerzo. It was by far one of the nicest lunches in South America so far. With a salad appetizer, delicious soup, really tender pork with 3 different types of potatoes and french toast for desert. It was definitely what we needed before catching the 7hr train journey. However, as we were eating it, it became more and more difficult to believe that it was going to cost us B17 each. Sure enough the bill came, and it was actually B25 each, plus a B1 inbuilt tip. Well, it was a bit weird we had got this so wrong, but at the end of the day, it was the value of a fiver for the two of us. So on this occasion we swallowed the extra cost and rolled out with very full tummies!