At Home in Chiang Rai

Laos to Thailand by boat

Back to Luang Prabang we opted to try out a hostel recommended to us by a couple that we had met on the trek, Fi and Dan. This was better value. 60,000kip for a huge double bed, free tea, coffee and banannas. Worth a try for sure. We got dropped off at the Elephant Camp office and walked to the hostel getting caught in a massive down burst that soaked us through. Welcome to the rainy season! 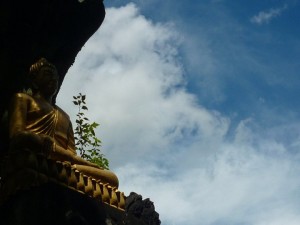 We only had a couple of nights remaining in Luang Prabang before we aimed to make our way to Thailand. In our last couple of days we visited the main temple at the top of a hill in the centre of town, visited a Daoist and Tribal exhibition at the Cultural Exhibition Centre, spent some time chatting with our new friends Fi and Dan. We introduced them to the Ice Bar, our favourite spot on the river for food and had one last night market supper. Not to mention a lot of shopping at the market to make sure we had some unique presents for our loved ones back home.

The hostel (Oudompong 2) Fi and Dan had recommended had been great and the owners had been extremely friendly and welcoming. We would definitely recommend it too!

To reach the Thai border from Luang Prabang we opted to catch a slow boat up the Mekong. The journey takes 2 days on 2 separate boats. The first leg takes 8hours to Pakbeng and the second to takes another 8hours to the border town of Huay Xai. Each boat cost 180,000kip and tickets for each had to be bought at the port of departure. A few words of advice would be to make sure you have enough food and water for the journeys. The little shop on the boat had the monopoly and was charging extortionate prices. Also, there are no ATMs in Pakbeng or in the port area or Huay Xai, so make sure you have enough money to pay for a room, food and the next boat journey. We were aware of this but there were people who were in pickle and had to borrow money and make arrangements with the boat drivers. Not a nice situation to get into.

We were both acutley aware that the journey to the border was one of our final mammoth journeys in our entire world trip. It gave us the extra incentive to enjoy every minute of it, however hot and long it might be. We didn’t need this extra incentive though. The journey was incredible. For us, the Mekong had become dear to us. 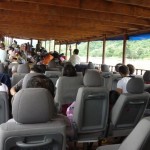 For several months we had been travelling up from the Mekong Delta and river.Throughout our passage north the Mekong would keep appearing and we would often find ourselves settling in a town with the Mekong dominating the place. It was a majestic river where life depended greatly on its existence. It was a pleasure to be travelling on it at long last, rather than across or along side it. Even so much further north than when we were first introduced to it, the Mekong was still very wide and strong. For the 8 hours to Pakbeng Al and I were mesmerised by the scenery. The large population of Laos people on our boat knew what was to come and at one point they all began to stand up and look towards the left side of the boat. A huge cave in the rocky riverbank exposed itself. Inside were hundreds of little golden Buddha statues. The setting was stunning. The same sheer rocks portruded theotherwise flat green landscape that we had witnessed time and time again throughout Vietnam, Cambodia and Laos. The river became less busy with only a handful of local people fishing or kids setting up shrimp nets in little alcoves. The river meandered for hours and hours. Sometimes so narrow that we would have to negotiate rapids in our long boat, at other times the river would suddenly become so wide that it felt like we were boating in a huge lake. The boat would cut from one side to the other where the water currents were less strong than the middle. Along the side of the river it was possible to observe the jungle-like vegetation that occupied the land. It felt like every single tree and plant we passed was different fromt the last. Now and then I would recognise trees with huge twisting pods overhanging the river edge. I arranged myself so that I was sitting sideways and enjoyed the closeup view of this untouched fauna. I realised at one point that I had been witnessing only shades of green for the last 3hours. I felt emotional and completely and totally in awe of what I was experiencing. It was something I would never forget. 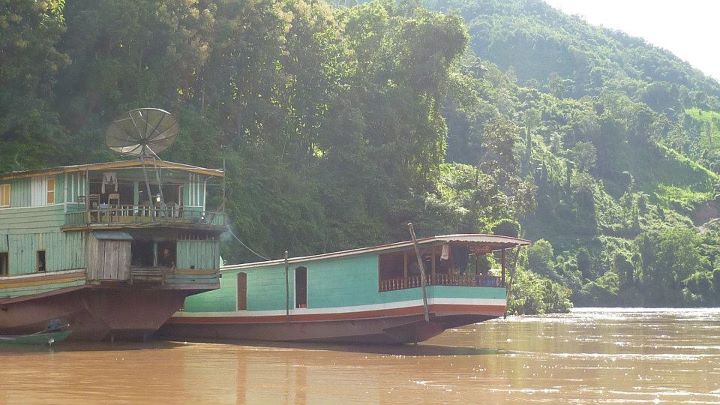 Eventually we pulled into the small port of Pakbeng. Before we were even off the boat people were trying to get us to take their hotel room. Al somehow managed to hop off the boat whilst we were parking and snapped up a good deal of 35,000kip for a double ensuite room. We were just up for as cheap as possible. We followed the young guy up the steep road through the small town. Our room was basic but fine for the one night we aimed to stay. The town itself was dependant on the through traffic of people on their way to Thailand, or the travellers having who only just arrived. The road was lined with restaurants trying to drag the customers to them, however we were surprised at the pricing. We had expected much cheaper, but I guess they played on the fact that people had to eat somewhere thus giving into the prices, also they needed to make the most out of the people who generally only stuck around for 1 night and departed on the morning boat. We succumed to it and enjoyed our last tradional Laos meal of Laap, sticky rice and vegetable noodles which was as delicious as ever. Al was particularly keen on the town. We had a comunnal balcony that we sat on until late at night observing the goings on in the street below. He realised it was the abiltiy to watch normal people going about village business and family life without being too affected by the city and tourists, despite the daily through traffic of people. We relished the balmy evening and our second last night in Laos, a country we had grown to love.

The second leg of the journey to Huay Xai was just and memorable as the first. As the boat meandered for another 8hours the left riverside was becoming evidently different to the right. As the journey progressed the left hand side became more manicured with tidy lawns and gardens. The houses were less like bamboo shacks and more hardy looking buildings. At one village there was even a tarmac road running from the boat launch up the hill into the village. On the right, the more junlge-like view remained with bamboo houses and muddy roads. We didn’t twig why this was at first and then it suddenly occurred to us that on the right was still Laos and the left was now Thailand! 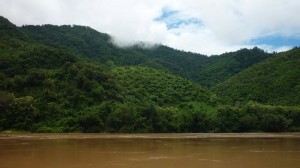 We arrived at Huay Xai at 5:45pm, only leaving 15 minutes before the border to Thailand closed for the day. This meant that people were forced to spend one more night in Laos. In our case this was always our plan and we certainly were not in a rush to leave. We found a cheap room not far from the port and we bought a few bottles of cold beer. We sat on our balcony and watched the sun set over the Mekong for the very last time in our South Eastern adventure. As if it couldn’t get any better we discovered that the restaurant next door was an all you can eat bbq for 40,000kip each, same as the type that Mao had introduced to in Cambodia. What a great way to finish our time in Laos.

The following morning it was raining hard and persistently. There were no rickshaws in sight so we had no other choice but to walk about 2km to where the boat crossing to Thailand was. It was a bit of a miserable walk and Al suffered with his foot, but we managed to exchange the rest of our kip for Thai baht and find a place enroute for a few hot coffees and breakfast so we were soon cheered up. The boat across to Thailand immigration cost 10,000kip and luckily this was the exact amount of kip we had remaining in our wallets. Getting a 15 day visa for Thailand was straight forward and extremely quick. Within the next hour we had caught a songthew for 30 baht each to the bus station outside of town. This seemed a bit expensive, but when we added this to the price of a 3hour local bus ride to Chiang Rai (80 baht) it was a much better price than getting sucked into the private buses that many people charter. Infact the bus ride to Chiang Rai was a fun experience, it felt like we were on a riketey old school bus. It was comfortable enough for a mere 3 hours. Before we knew it we pulled into the central bus station. It felt strange to suddenly be in Thailand, our last country on our world adventure. It seemed more affected by the western world, it was certainly more modern than Laos. Even the roads were better and more organised. Funnily it was the ‘rough around the edges’ aspect of Laos that we were alrady missing but we both got the excited pangof being in a new country, especially 2 weeks before we would be back in UK.