A Fazenda Chrstmas and New Year

Jolt back to reality

After being rowed across the river to the main, dirt road to the coast we picked up the bus and swayed off down the uneven, slushy clay 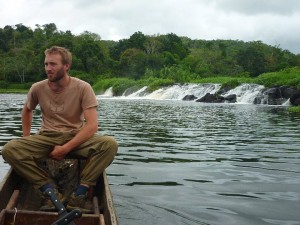 road surface. Another beautiful hot day and we were actually happy at this point to be going to see Itacare, as we had heard a lot about it. Most people had been and said that the beaches were gorgeous and that it was a place you could buy anything you needed, including Acai a uniquely Brazilian super fruit with approximately 4 times more vitamin C than an orange and other vitamins. An intense flavour and deep purple colour to match. We were looking forward to eating some meat as well, despite the great vegetarian food we had eaten. Although we would have assumed many of the people on the farm would be vegetarian we were suprised to learn that most ate meat, when it was organic and ethically sourced. The farm was vegetarian as a result of buying and cooking cheap, while healthy food. This is great, but we fancied a break also.

Groaning down the road past yet more fazendas the tree line was now we realised mostly young growth, despite looking like deep jungle, it was ultimately created by man`s activities. After hitting the cross roads with tarmac we were soon speeding through brick houses and billboards, churrascurias and people.

Off the bus we immediately headed to the hostel in town that was vouched for by everyone who had been to Itacare and stayed there. Free Internet was the word as we needed to contact people, blog, upload, call banks, set up transactions and organise our future. Being stuck inside in front of a computer while it is hot outside and a beautiful beach is so close is hard work and draining.

Most of the time was spent in front of the box of lights, being frustrated by Barclays bank who are useless and at endless situations that are so much harder to sort out while you are abroad. If you bank, make sure you have numerous points of cash access and enable someone in the UK to act on your behalf. It makes things easier. We were using local sim cards until this point as this was cheap in India, but here not so. Skype is easier and cheaper to use, but the trouble is finding a place that has a good enough connection and a good enough computer that can run it. Using the Internet in remote places is also difficult. 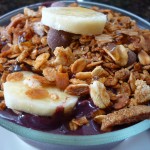 After a few hours of initial Internet, Laura in the meantime had had her fix of Acai, we headed out for a beer and to briefly see the sights. We were with Max who came with us to use the Internet also and he joined us for some beers and lunch before heading back. At this point Haroldo, who works in Itacare walked up and sat down. We knew people in Itacare and had never been there, a really nice experience. We all had lunch before going our seperate ways. We ended up spending 2 nights in Itacare. It was good to get some time just the two of us, have a breakfast that was not porridge and go out for an all you can eat buffet in the evenings for just Rs15 (6 pounds), with a capirinia (local Brazilian drink with lime, sugar and cachaca spirit). At the farm the bar was across the river and down the road, there was no meat, choice in breakfast did not exist. As a result it was good to have back, but did this mean that we were just enjoying the stay in the farm knowing that we could go back to these things? Was our experience there artificial and based on short term novelty? Perhaps. I did realise that I would find it very hard to be a vegetarian in the long term, but that when one has nothing and there are no options then you soon adapt. 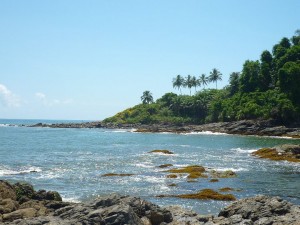 We certainly did miss the tranquility of the farm and beauty of the place. Itacare was covered with surf shops, over priced tacky souveniers and fake wooden restaurants made to look “surfer-esque”. The surfing in Itacare was some of the best in Brazil, but unfortunately we had no time for it. Instead we just shook our heads at all the swaggers down the road, gringoes and Brazilian posers alike walking down the road looking about to see if anyone is watching them. Brazilians in tight hot pant like shorts, which really was not a good sight! 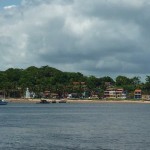 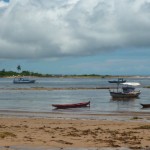 After 2 days of intense touristic abuse, abuse from the monetary system, banks and people at our hostel for using the Internet for more than the stated 20 minutes bla bla bla we were exhausted. Jolt back to reality of what? We left with things patched rather than sorted, but less worries about impending financial meltdown. Back on the bus and to our haven. We stopped off at Taboquinias a village 30 minutes away from PuraVida to buy some frozen fruit pulp that you mix with water. We already tried fresh juice from the cashew nut fruit as it is grown on the farm and it is an amazing flavour, my new favourite fruit juice.

Supping our last luxury before the farm we arrived on the bank on the “other side” as it was known and made extotic whistles and monkey noises, which is the standard way to get attention for someone to row over and pick you up.

We were greeted by Simon, crossed the river and then slumped into a hammock to regain our sense of nature and “real reality”.