Well after all that travelling it was time to have a break of a different sorts and head to Ibiza baby and a massive relaxation session in the sun. Nothing but good friends, beer, a pool and a good sound system or two.  We felt like we had deserved it!  So what better excuse than 2 of your good friend’s 30th Birthday to celebrate in the sun?

Luckily we had been pre-warned of the event and had bagged ourselves early sleezy-jet tickets to the island of sun and fun way in advance and when we were still travelling in fact.  All we needed to do is make sure we kept the costs associated with European travel down, sit back and enjoy around 15 of our friends company, all of whom we hadn’t seen yet in over a year now.  What a way to catch up with good friends?!

It was almost a shame that we actually left the UK from Bournemouth airport with everyone wearing their sungalsses. After a few hours of singing, drinking and a party like at-mosh-phere on the plane we landed and since it was dark the whole plane now had sunglasses resting on their heads. A strange sight, but one that reminded us we were about to soak up the last of the summer sun before the onset of Mr frost.  We discussed plans to walk to our luxurious villa in the hills with a lady who sat next to us on the plane and how we were writing a book, where we had travelled to etc.  As we left the airport she chased after us and pushed £20 into our hands to pay for a taxi. Refused to take it back, gave us her address for the first signed copy of our book and ran off.  Experiences like that are moving. Firstly the kindness of strangers and acts of random kindness make a larger impact than normal.  Secondly we were continuing the travel philosophy of being able to reach the villa somehow, as things always pan out. This was “going with the flow” at its best.  Be open and kind and life helps you out.

We rumbled into the hills overlooking the lights of Evissa town and the airport. Continuous streams of planes bring party people to their paradise.  There are various types of accommodation on Ibiza as you can imagine:

Cheapest:  Bring a hammock, a padlock.  Set off to unknown beaches and sleep there. Alternatively sleep on the beach during the day and party all night.

Cheap:  Highrise hotels in San Antonio and surroundings. These concrete blocks are made for the mass crowds looking for a cheap holiday, sun, sex and booze.  You can pick them up for around £15 per night for a 1 star place.

Mid Range:  Masses of these. Choose a more boutique hotel if you can afford it.  Some come with breakfast and good views of the sea with a cooler and more relaxed vibe.  Evissa town tends to be the more mid market offering, away from the throngs of teenagers who are being sick everywhere. Expect to pay around £40- £100 and remember that prices almost double during the high season 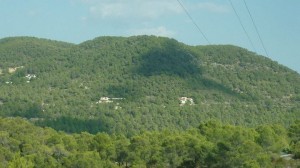 Top range:  Hit the high life?  Well stick to the hills overlooking the beaches, but are in the rural interior of the island.  Here you will find multi-million pound apartments with private pool, BBQ areas, an orchard or separate villas and room for loads of your friends.  Otherwise there are a few 5 star hotels on the island like the Hacienda in the north-west.  We just stopped by for a drink to watch the sun set but the place is fantastic, as were the room rates. 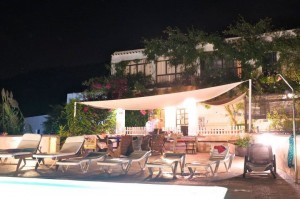 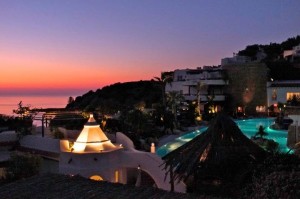 The accommodation you are looking for really does depend on your aim in Ibiza. There is obviously no point in paying what is generally at least £1000 for a minimum 1 week stay (double in the summer and some as much as £15,000 per week) if you are exploring all day and partying all night!  If you want somewhere quieter choose the north of the island or a villa in the interior.  Also choose to travel during the low season (October 1st –  May 31st), when the parties have stopped and the locals take a sign of relief.

Alternatively head to the resorts for cheap package deals and (See left for our hotel finder) loads of up for it party and beach goers.  During the summer there are loads of bar deals, pub crawls and plenty of dance floors to see the night away.   San Antonio is best. San An’ is split into three main sections, these are the town ‘Westend’ The Bay ‘Cala De Bou and Sunset Strip ‘Ses variades’. Most people tend to visit the very popular West End and will stay in a few bars they found on the first day.

If you are wanting to avoid the huge crowds but still have good enough weather for the beaches and other activities you will want to visit Ibiza sometime between the middle of April and the first week of June, or in early October (when we visited).  In October you can see the parties close down for the season with the epic closing parties and then soak it up for the remainder of thew time, while enjoying relatively low rates.

We were lucky enough to be in the top end. A beautiful two story villa with 2 separate apartments, BBQ area and pool on a veranda 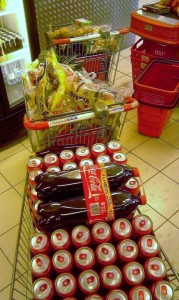 that overlooked Evissa town and the surrounding countryside.  The first night was spent catching up and drinking small cans of the local beer that costs around 50p per can in the local supermarket (cheap compared to the western supermarkets in major towns).  We took in the atmosphere and relaxed beats coming from 2 big speakers Mark had brought from the UK on the plane…

Shopping for 15 people for a few days was interesting, but fun.  I consider myself fairly good at appreciating scale. So when Ed came back after 15 minutes and found me with 2 trollies full of (8 crates of beer, 20 litres of orange juice and half full of meat), a scared look took over his face.  We ended up with 3 trollies full of fruit, vegetables, beer and anything else on could possible want for a party or two in a villa in Ibiza.  Hang on a minute!  We don’t have any spirits.  I ask the cashier who looks a bit daunted by the size of our load to open the cabinet containing said liquids.  Another lady opened it and asked in Spanish what we wanted.  I looked and hmmmmmn’d.  “5 bottles of vodka and the three bottles of cointreu. In fact all of that”.   “All of the cointreu??” she enquired.  “No, all of it” I replied.  “All of what exactly??” She quizzed.  “EVERYTHING.  I want everything. All of it” I insisted.  Instead of going around in circles with my failing Spanish I drained the cabinet of every bottle in there.  That should do it I smiled.

We returned after almost 3 hours and having “invested” around £600.  Yet we were set for a few days and broken down that wasn’t too expensive considering the number of people involved.

The next night was my speciality- BBQ.  We lazed by the pool, drank beer, smoked cigarettes and worshipped the sun. In fact some people did worship the sun- a yoga sequence that a row of people completed in a line as the sun was setting, while others lazed in the orchard in hammocks we had strung up and read.  The place was fantastic and everyone had a peaceful smile about them.  There is one thing going on holiday, but another going on holiday with loads of your friends.  There is always some kind of mischief at one end of the party, while others are relaxing and others sinking beer like it is going to run out.

Some people really couldn’t sit still though and had to go and explore the island.  It is interesting to see as we were both content relaxing, making the most of a fantastic villa and the fact that we were catching up with our best friends.  We didn’t need to do anything.  Again this becomes aparrant when you have been travelling and don’t have a time limit on appreciating a place.  It also comes with people’s needs for their holiday.  Some people are pool people and some are not.

We were due to go clubbing that evening, but as they wooziness of the beer and sun crept over me and couldn’t think of feeling or doing anything better. Friends- check, sun- check, beer, BBQ, food, pool, good view…. check.  “I am not moving” I reply…..