The “Rules” of india

We landed in Huancayo on our first bus ride that felt like 4 hours, but was really 7.  It was on time, which was good, but I was still a bit dazed from a late night, so finding a cheap hostel in town as quickly as possible was needed. 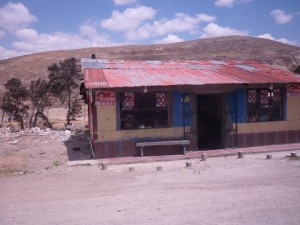 Walking through town we really now felt like we were heading out into the wild west.  The place was dusty, surrounded by the sierra mountains, the cars old, the women all wearing tight jeans, many with silver caps surrounding their teeth, while most of the men donned cowboy hats, jeans a shirts.  We walked through the town with glances and occasional comment of “Hey Gringo!” when the stereotypical wild west sound of  “ooo eee ooo eee ooo.  waaaaa waaaa waaaa” eminated from somewhere a fair distance away from us.  We WERE in the wild west!

After our usual looking around and trying to get to grips with what things should cost and reducing that as much as possible, we made it to a cheap hostel that had a hard double bed, but a private bathroom with hot shower.  Despite it being fairly small, musty and lacklustre this is great.  Cheap is better and for 15 Sols (around 3 pounds 40), we were happy.  After all we told ourselves, the less we spent on accommodation the more beers and better food we could have!  Our budget at this point is 10 pounds per day, so, thus far we should be in good shape.

Later that evening we headed back up to the main square we walked through previously and past the numerous roasted chicken, chips and salad restaurants.  Many places were called “La Lena”, but we were not sure why.  After perusing a few options, including those from our “Rough Guide”, which were all crap from our point of view we paid a visit to a “La Lena”.  Wafts of bar-b-qued meat pushed past us on our way in and a guy was manning a wooden grill.  Nice.  We were starving and were not disappointed by the largest portions, easily competing with the USA.

That night we slept soundly and over full with a solid meat mass in our stomachs.  We awoke early next day due to an early night and headed to the famous Sunday market.  The backstreets of Huancayo were quiet, a little disturbingly so, as if the streets were dangerous to walk down.  The place was all a pale shade of maroon from the dust that cars threw up from the dirt track roads.  Before we explored the market a coffee was necessary, as much for the warmth as for the stimulation.  Coffee in Peru is fairly bitter and is served concentrated, or as a sachet of ´instant´. This is then added to a mug of supposedly hot water, but often not.  Milk in Peru is never pasturised and so appears with lumps in as it has been boiled, and this is mostly not available. So black coffee is generally the order of the day.

After a blast of refreshment and watching the locals eat over cooked egg and plain rice with their mouths open we began to wander around the stalls containing everything from herbal elixirs, to live chickens and rabbits, to gelatine deserts, clothes, poor quality jewelry, household goods and fresh fruit and vegetables.  We only made it halfway down the 2km stretch that led down a single road, before deciding that we had exhausted the now repetitive offerings. We had a wander and after trying the cheap 4.50 Sol roast chicken deal we saw the previous night decided to pay a visit to a lake where you can go fishing and then have some people immediately cook your catch.  Trouble was most people didn´t have a clue what we were talking about.  After a brief Internet stop a lady behind the desk exclaimed “Si, esta… something something and something else”.  We understood that we needed a bus and the general direction and so encouraged headed in that direction asking the passing buses.  After a bit of confusion our developing Spanish and the conductors took us to a square where we were ushered onto a small minibus to “Ingenerio”.

We headed out of town and wondered where it was “Ingenerio es un hora senior y dos soles”.  1 hour in the bus!  woah… didn´t expect that.  Either way the drive was amazing and it was good to be taken somewhere we had no control over, recommended to us by someone we had met once, in the middle of knowhere and without a Gringo in sight.  The place turned more dusty and the hot air poured in to fill our lungs with a mixture of Eucalyptus that lined the roadside.  Farmlands scattered as far as the eye could see until you met the Andes range.  Small villages with quaint squares were the order of the day.  Ladies wearing brightly coloured cardigans despite it being hot, and adorned with top hats, or bowler-esque style hats.  The women it seemed also aged faster than the men and looked, often like leathered skin prunes.  A sign of hard work we thought.

We finally made it across the increasingly bumpy road to a place which was clearly a Peruvian weekend break destination.  We headed up the road as directed and paid a visit to an enclosure, which turned out to be a fish farm. 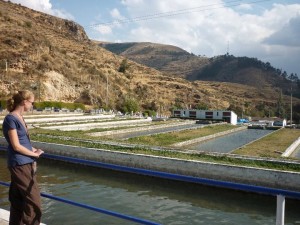 We thought this may have been where we could catch fish and cook them, but it was just where the trout was produced for all the “Trucha frita” (fried trout in a light batter) the Peruvians ate as one of their favourite dishes. 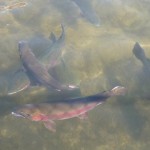 After having a wander and trying honey wine (sweeeet- excuse the pun)  we headed back past some of the restaurants thinking we may have past them.  Sure enough after asking in broken Spanish and top “fishing” miming work, we were led to a pool and past a line.  There were no fish and the table who were eating laughed and told us they had the last!  So we left and again we were led down to a lake this time and given a stick rod.  After 15 minutes of preparing my implement of catching dinner I set about slinging the line in the lake.  There was nothing there though, you could see the bottom and for sure I was fishing an empty pond.  After 20 minutes we headed back up dejected and the man who gave me the rod pretty much said “Yea no fish… its Sunday, so many people”.  Thanks for letting me know pal!  Instead we sat and drank a beer and watched the building of the first clouds we had seen in the hills.  Birds of prey, the ubiquitous pidgeon and seagulls all hovered overhead.  Rural Peruvian farmers led sheep down the road and when we started getting cold decided to head back.  At the minibus drop off point there was a massive horde of people.  It was at that point that the literally freezing rain began, with us both in T-shirts and thin clothes.  Huddled tight we waited for the next minibus we were bound to miss due to the limited capacity and the number of desperate travelers.  A massive, single explosion of thunder scared everyone half to death and it was only after 20 minutes under half, shack shelter that we made it back to the bus and en route back to town, my ass cheek halfway on the seat to appease the guy who offered a small part of his seat.  We made it back and retired early again ready for the next leg to Ayacucho.

At 5:30am we were ready. We had heard of a train to Huancavalica, further in the highlands, waaay off the beaten track.  We caught a taxi to the station, which was strangely quiet.  Everyone agreed we were good to go, the taxi driver got out to hammer on the massive corrugated tin doors.  No answer.  Finally a sleepy security guards head poked up from a side wall and rattled off the taxi man that “El tren es rota”- the train is broken.  Great.  So we redirected to the bus station, where we found that the next bus was 8:30, 3 hours time.  Used to waiting for extended periods of time now we bought our tickets and waited in the freezing cold waiting room, the faint hint of blue-grey that signifies the start of dawn.  Soon the town woke and the dust began to rise yet again.  The sun quickly warms your body when you are sat in it, but being so high up you are still cold in the shade.  A few black coffees and cheese sandwiches later we boarded the Molina bus and set off further to the South-East, in a pleasantly fresh, but sun warming morning. 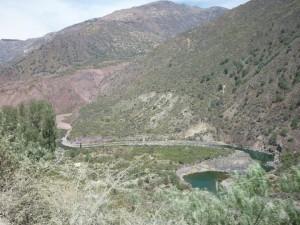 The bus journey was amazing.  We headed up and up and I wondered seriously whether it was possible to climb any higher and still see vegetation.  The sky was a deep aquamarine and as we were in the dry season the grass was dead and yellow.  The expanse of valleys and gigantic mountains spread off into the haze, in a mixture of light greens in the valleys, blended into increasing yellows further up the hillside.  The rock was all shades of terracotta, browns, umbers, maroons in all shades from the various voids and elevations in the hillsides.  In the gorges sit trees and some apparently fertile land, while at higher elevations saw cactus forests and aloe vera clinging on to the sides of the range.

The river in the photo above came into sight and continued for 4 hours of our 11 hour journey.  The deep water an apt deep blue turquoise colour turning into a milky white after the massive hydroelectric damn that has been built to supply the cities.  At this point the river diminished into a minor river or a stream in places.  Yet further away from the damn the river built its level slowly and took on the colour of the surrounding rock.  A bright red colour mixed with turquoise again the river wound around and almost matched the course our speeding bus was taking as the driver blasted through the turns despite the lack of barriers and swaying because of the curvature of the road into nothingness, which meant that we tilted over the gorge as some of the wheels were on the edge of the road as we careened around some of the turns.  This was enough to make our stomachs turn at a fair few places.  Focusing on the beauty of the landscape though we almost did not notice the vibrations of the road and the possibility of death. The bright red, purple and blue rock now came into sight, which refracted with the now jade colour of the river making a watercolour scene that Monet could never compete with. We were briefly stopped at a checkpoint in the middle of nowhere to show identification in the middle of a field of stereotypically shaped “wild western” cacti, boiling in the sun as the breeze failed.

To put our drivers craziness into perspective, we overtook the Molina bus that left 45 minutes before us after 4.5 hours into the journey and never saw it again.  We arrived in Ayacucho 1.5 hours early at 4pm in the afternoon sun.  When we were there we thanked him, en route we did not.