Well well well. Good old Bangkok.  The word in itself carries as much innuendo as the capital’s reputation.  However, despite the sex and under tone of the fascinating book Welcome to Hell: One Man’s Fight for Life Inside the Bangkok Hilton

there is plenty to do in Bangkok.  Here are our checklist for tourists who want to see the sights. 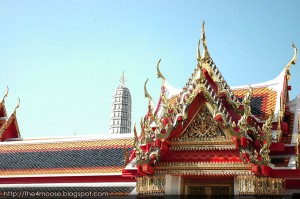 The Grand Palace and Wat Pho

It would be criminal to leave out perhaps the most obvious attraction in Bangkok. The Grand Palace is a collection of royal buildings, including the Temple of the Emerald Buddha (which was actually brought in from Chiang Rai), but is nevertheless the holiest Buddhist site in Thailand. Wat Pho is the home of the Reclining Buddha, a gold-plated 150-foot-long statue. Very impressive. Ensure you arrive early to avoid the non-stop stream of tourists arriving.

An explorational trip around the canals of Bangkok are essentiall the “back streets” and shows a side of the city usually missed. So much of Bangkok life happens on the canals. With temples, houses on stilts, children playing and laughing in the water, these waterways are a contrast from the rest of the city life. Reach Khlong Bangkok Yai, one of the liveliest canals, by taking a longtail boat from the Oriental Bangkok hotel pier.

The rare spot of green amongst towering grey and steel at the centre of Bangkok.  Lumpini is where people all ages come to exercise relax and get away from the hustle and bustle. Head out early morning to take part in the variety of activities being practiced. From Tai Chi to yoga and aerobics, running, and even ballroom dancing!  Concerts are often held on Sundays during the cool season.

The beauty of travel in Asia is that you can often afford to do something different and more up market than would be possible at home. Bed supper club is not cheap, but an awesome experience of swanky interior matched with cool club nights and fab food.  They describe themselves as “a unique combination of upscale restaurant, club, art gallery, theatre and stage merged into one“. Quite. Fridays and Saturdays are renouned nights that are a feast for the sense and include both food and entertainment to match. 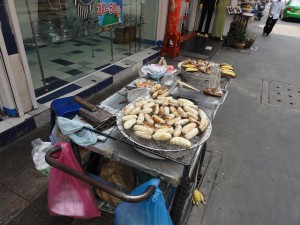 We are massive foodies and a tourist attraction in itself is hanging out oin the street corners with the locals watching the world go by.  You’ll find the most delicious and flavour packed food on the street, and while most people are put of from what is considered the dirty street and is generally daunting at first, most stalls are as clean as any restaurant kitchen. Just ensure you avoid anything that looks like it’s been sitting out for a while (i.e. curries), certainly avoid anything western like sandwiches and choose food that you see cooked in front of you like as noodle soups, fried bananas or grilled chicken or pork. The best rule is to eat when and where the locals do! 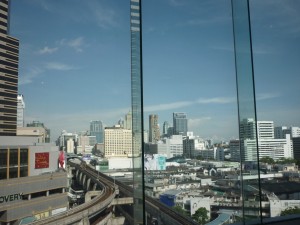 This is the tallest building in Bangkok and gives a fantastic panoramic view across the city. It is set up to receive tourists and at the time of writing entry to the top floor (a second lift from the hotel is manned and requires a ticket to take you to the very top where the bar resides) was 250 baht.  A circular walkway takes you through the building of this structure as well as additional information on the city, after which you can claim a free drink and sit looing out over the city.

We had to include it.  It is amazing and ingrained in the Thai culture as an offshoot of prostitution generated by US soldiers during the Vietnam war.  There are a few shows that are dubious with stories of people needing to pay to be let out of the club. Drinks are expensive (often £5- £8 each) and it is a seedy affair. However recently there are a few that have become such a mainstream affair that they are filled with Western tourists, male and female alike.  Ticket prices are negotiable by from 250- 500 baht and include a drink or two. 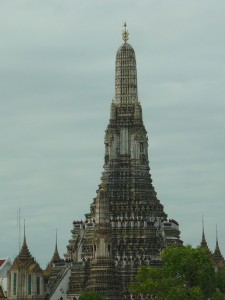