Argentina is famous for its steak and red wine.  Yet this is a misnomer as most of the more tender cuts of meat like fillet and sirloin are shipped abroad to sustain the insatiable appetites of the United 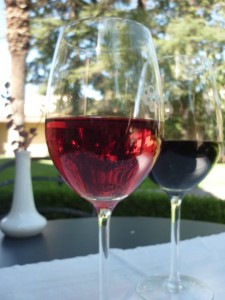 States and Europe, where it will also attract a higher price.  Nevertheless the BBQ or “asado” as the locals know them is still one of the favourite meal choices for the Argentines.  The asado is steeped in Gaucho tradition, on the plains of the Pampas where the cows are reared and cooked whole on metal spits which are supported over an open fire.

Today wood is still used to cook the meat, but a whole animal is generally saved for larger occasions.  Instead “achuras” or offal takes center stage along with the more popular cheaper cuts of beef.

We were introduced to a Mendoza classic of the chicken small intestines whole stuffed with smooth pate, which provides a crispy outside and soft middle along side sweetbreads and kidneys!

Olives and eggs are also popular imports from the Spanish immigrants who settled in the 16th century and are used to fill empanadas.

Empanadas are pastries traditionally filled with beef, although there are various filling combinations depending on the region and country.  These versatile and immensely tasty parcels have now taken over South America and are also found all over the world.

Savory, family meals are generally prepared from family recipes handed down over generations, are eaten together as social occasions and make the cornerstone of Argentine tradition.  However the Argentines also have a very sweet tooth, which is satisfied by dulche de leche (caramelised milk) and used in many different desserts and cakes, as well a spread for toast in the morning. 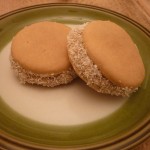 Argentine Alfajores biscuit were a firm favourite along side the many other dessert and sweet items containing “dulche de leche” or sweet milk all over Argentina. In Posadas we were told that most people simply boil a can of sweetened condensed milk for a few hours and it is ready to use when you need it. …

So what really goes into the world famous Argentine asado achuras?  The asado as it is known, really is as good as it is made out to be. However a lot of people will be surprised to learn that thick steaks are not on the menu, but it is well prepared offal that takes center … 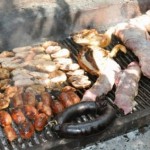 Argentine Matambre Arrollado is a rolled cut of beef typical to Argentina and uses a typically Mediterranean- Spanish filling. The Argentine cut of meat is butterflied and flattened to make a sheet of beef. It is then filled and rolled before being cooked and sliced before serving. Here we need to remove the fat and membrane …