Let´s get to the point. Brazil is massive. Looking at local dishes in Brazil and the concept of local comes into its own. The culture of the coastal country versus the other side of the country in the jungle of western Brazil make for massive distances and differences in food and the people who live there. 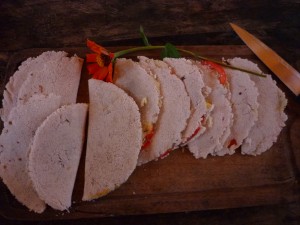 A few interesting points on Brazil´s food though. Most people eat avocado as a sweet rather than savoury in something like Guacomole. Lots of fish features on the menu near the coastal and in the Amazonian region, yet bar-b-qued meat called churrasco is also massively popular. Brazil certainly competes as a nation with the best BBQ!

Restaurants called “Rodizios” offer all you can eat meat feasts, where waiters come to your table with seemingly endless cuts of meat.

Local dishes in Brazil use Tapicoa- a popular ingredient, yet as its originating country, Brazil surprisingly does not consume this root as much as Asian countries.  However street stalls sell Bijou’s, which are pancakes made from tapioca starch, then filled with coconut flesh and its milk or cheese and tomato and these are absolutely delicious.

Immigration has continually changed the composition of Brazilian society, from when the Portuguese entered in the 1500’s taking over from the native jungle populace, to when the Japanese arrived after World War II and the Italians during the same time.  The resulting influx of different food now characterised the urban Brazilian population.

Ice Cream pizza was introduced to us at a Rodizio, which is a waiter service all you can eat food extravaganza. Usually associated with a meat feast where servers arrive at your table with hunks of almost every type of meat you can imagine, including one of our personal favourite chicken hearts. Rodizios actually come …

Moqueca is a vibrant dish of colour and seafood, with a heady influence from Brazil’s north-eastern Brazilian-African food. This Brazilian fish stew Moqueca is a taste of the tropics. With fresh fish, lime juice, hot bell chilli pepper and coconut milk this dish is unsurprisingly hugely popular and on most of the menus in Bahia. …

Urucum is an intense and rich dish using fresh fish from the Brazilian Pantenal. Local dishes in Brazil’s western flood plain- the Pantenal utilises a whole host of rivers that are teeming with a wide variety and large volume of fish, especially after the breeding season. As such river fish is on the menu in …