Mekong Delta and My Tho

After spending more time than planned in Buon Ma Thot, we are now feeling the pressure of our 1 month visa and despite having some great sounding options in the South East. For example Phan Thiet is on the backpacker bus route (a hop on, hop off bus costing $40), but is supposed to be a beautiful beach town.  We had also marked Phan Rang and Vung Tau down as obscure places where we could see real Vietnamese life.  Nothing is mentioned of these places, but armed with sufficient Vietnamese we could finally break out of the travelers mold.

With such little time however we decided not to attempt it. With more time we would have, but both of us were keen to see the Mekong Delta area. Not only was it supposed to be cheaper, but great markets and small towns that are only really visited on tours from Ho Chi Minh City (HCMC). To achieve this we needed to get down to Ho Chi Minh where we would spend a few days and then head to the Mekong.

We reached the bus station that was undefined due to many different answers being given as to where it was exactly, by tour agents and the MaiLinh bus company itself (who ended up being wrong). The bus was an over-nighter. First comes the wet wipe and then a small bottle of water. Somehow this adds a touch of class to the journey, despite the seats reclining only 3/4 of the way and being too short for anyone over 5 foot 9.  We set of with legs in the aisles on time and had a relatively comfortable journey throughout.  Every over night bus has a food stop at some hour at night. This time we had to pay though so getting off the bus was in vain.

After watching the lightning in the distance towards the Mekong area I fell asleep and woke with honking noises just as the sunlight was breaking over the skyline. In less than 30 minutes we were ejected out of the air-conditioning into the exhaust fumes of HCMC. Taxis and moto taxis surrounded us and excitedly touted for business, which we ignore and walk to the nearest coffee stand and sit to compose ourselves and wake up.

Talking to the lady working on the stand we could get a bus.  We got on the bus and were waved on. Questions on the destination or leaving time ignored with more waves and forced exaggerated sad face that means ‘No speek Eengleesh’ to get us to sit. We were sold a ticket for 8,000 each until we realised that there were in fact 2 tickets. We questioned this and the ticket lady pointed to our bags, which were on our laps. So I moved them to their own seats if we were paying another adult ticket each for them, but she told me to move them off. I asked for the money of 2 tickets back. She was sprung and knew it. She started getting angry immediately, as is common in the Vietnamese psyche when both parties know they are in the wrong. She tells the driver to stop and for us to get off, refunding our money. ”Fuck off!” she screams with other commentary. Suddenly her English is pretty good!

We wait for 5 minutes for the next bus, who charge us the correct fare, help us with bags and agree to tell us when we need to get off. After an hours journey winding through the vaguely familiar city we reach the centre of district 1. Tourist quarter. This just means cheap accommodation to us. We walk around and ask at every place we found, while heading to a place that Laura had seen online. Everywhere was about $15, $10 was good. However we eventually found a place for $9, which we settled for. After registering and paying the usual trick of giving a poor exchange rate to make up the difference that our negotiation had given versus the quoted price. We had been here before though and told him to not take us for fools or we would pay in dong. He agreed.

We headed out very hungry. Walked around some of the small alleyways with doors and windows everywhere. Entrances to guesthouses that were almost impossible to find deliberately. We found a cheap coffee stall that would become our daily morning pit stop, to fuel our addiction of sweet, black, iced, coffee, which is served with green tea to help its digestion.

En route to finding a hotel we saw many buffets advertised on big banners. We were starving by this point and were sucked in by the notion of all you can eat/’eyes bigger than your stomach syndrome’. We settled on one that was cheapest at 125 dong (4 pounds). It was at the top of an upmarket hotel with a glorious view across the HCMC skyline. We were not disappointed and agreed that it was money well spent. There were all types of fresh juice that we had craved, spring rolls that are relatively expensive (5,000 dong each on the street), chicken, freshly made soups and stir fries, salads and everything we had wanted to eat, but was generally too expensive. We even tried apple headed snails, massive things that requires a hardened palate. All this at the same time was dangerous however and we rolled out of the place straight to bed while our bodies decided what to do with all this food.

Later we awoke to have a wander and gain bearings.  Picking up a nuoc mia (sugarcane juice) en route and ended up walking for a few hours around town to burn off some calories. It was fairly late in the afternoon however, so when we had walked through the park and to the Reunification palace we were too late to go inside as they closed at 5pm.  We continued to Notre Dame cathedral, which was newly constructed after the Vietnam war and not particularly inspiring in architecture or history. 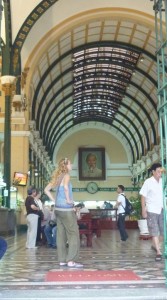 The post office on the other hand, taking similar architecture and layout to an old railway station, was interesting. Old maps of HCMC from French colonial days highlighted the growth of the city. We then began to head down towards the river and tried a fried quail egg, dried shrimp and chilli snack cooked in a BBQ’d rice pancake. We saw the lights come on in the beautiful Theatre, next to the Radisson at dusk, amid the financial and boutique clothing area of town.

Despite taking a whistle stop tour of all the popular highlights in HCMC we were glad we did so on foot, as the tours were expensive and the sights not incredibly interesting. We headed back and decided that as we hadn’t seen many other travellers in a while, off the back of a conversation of how we prefer to immerse ourselves in as local culture as possible, away from foreigners. Even if the destination is devoid of ‘sights to see’, which are rarely what leaves the impression of a place. We decided to change this for a night.

We were investigating the offerings of the bars amid heavy competition, ”We will be back but I have to meet a friend over there now” I lied. While just having our first drink we looked across and there sat Marlin with a friend. We escaped that bar after the first to a cheaper beer hoi place, where beer was 5,000 dong (around 15p). This was rammed with people sat outside on squat plastic chairs. We sat in the road and were joined by a Canadian couple. After the beers flowed and everyone seemed to get along we discussed the culture of karaoke in Asian countries, especially Vietnam. We decided to go to one. The Canadian girl roped in some randoms from across the road and we set off walking, following her unfounded vague directions. We decided to jump in a cab and jammed 6 of us in the back until we burst out upon arrival, much to the amusement of the locals who were leaving the venue. 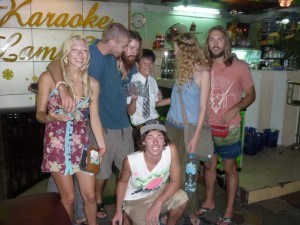 It turns out I am terrible at karaoke, but it should have been fun anyway. It wasn’t really. The Canadian couple loved hearing their own voices and sung practically the whole time. The randoms we met from Bournemouth didn’t want to sing, but just had a beer, just to slink out later without paying for anything. This left everyone to have to cough up more and for us to pick up a tab that wasn’t fair. We had consumed less and paid more. Lesson learnt. If you are intent on something like have a good night with some random people, like anything else it is unlikely to meet expectations. We just woke up with a headache of both physical and financial sorts. At least we ”did the karaoke thing” and do not need to again.

The next day we felt ropey and resigned ourselves to being in another pit of tourist hell. So to run with things we decided to spend $5 each on a day in the spa. We checked it out having learnt our lesson in La Paz that they are not all what they should be. This was and it was well worthwhile. A rooftop jacuzzi and pool, sauna and only a few people sharing this luxury with us for a part of the day only. We recovered and relaxed, reassuring ourselves that luxuries like this would not be on our future agenda and that this was probably a cheap day out in what is the wealthiest city in Vietnam. 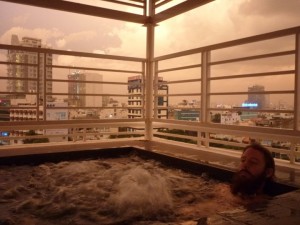 A birds eye view of the hustle and bustle provided a different feeling of the place. Separate from the hecticness, Ho Chi Minh shows itself to be a place of Westernised mod-cons, layered over street sellers, tradition and hard working people. Bikes 9 wide jostled for position at the lights before soaring over an overpass and past a Buddhist temple that was blaring something from within. Loudspeakers punctuated the temporary silence with identifiable cries of the bike sellers, or bottle collectors. 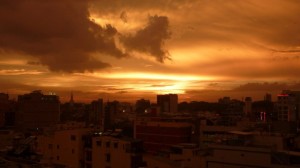 We decided to head to the market to have a look around before we left. Prices here were not great though, as again the market was on the list of attractions cited by the infinite number of tour companies. As the Australian dollar was doing so well, many Australians were here buying as much as possible to take home, without much care between the difference of a dollar or two. The trouble is that this increases the prices of things in said markets, to prices unreflective of the actual, local price. We skipped through fairly quickly, taking just inspiration of things we would buy when we are in a local market. We passed across the main roundabout where there was a show being held with dancers and singers marking the Birthday celebrations of Ho Chi Minh himself. The man who personifies the city and is revered by all inhabitants. We By passed the ticket office by walking through the motobike parking and watched for a few minutes before setting back. 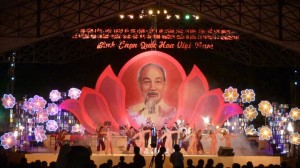 That night we retired early, ready for our journey to the Mekong the next day, keen to get back off the beaten track and into sanity. We started early and headed up the road to the bus station that would take us to an intercity bus station to the East of town. This was a great ride as we had a lethargic ride through the suburbs, taking in the flooded areas and ponds cultivating fish opposite tower blocks of new coloured concrete being erected on symmetrical streets reminiscent of the United States that the Vietnamese culture is embracing. An hour and a half saw the city become more spartan, more plots of wasteland until we reached the out of town bus station and on to a crowded minibus full of locals to My Tho.