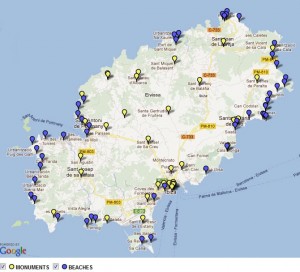 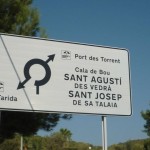 One of the beautiful things about an island is that there is a whole load of coastline, which makes exploring Ibiza great.

Far flung areas of the island are not too difficult to reach by slower means of transport.  The fantastic climate also means that motorbiking around the island is fantastic.  Winding through the semi-arid evergreen forests of the interior on new roads for the most part, is a great way to spend a day.

Finding all the nooks and crannies that are around that you feel that no one has seen before.  Secluded beaches on the north and north west of the island, to the caves that can be found scattered around the cliff edges. Can Marça Caves by Puerto de San Miguel beach are awesome and although we were a bit dubious about the Music & Light Show around the waterfall it is worth a look as a tourist attra 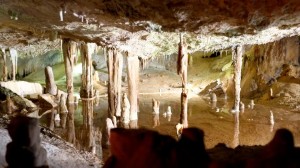 When exploring Ibiza it is worth noting Las Salinas the Salt Flats that are over 2000 years on and one of Ibiza’s most famous landmarks. Found on the southern most tip of the island they can be easily reached in the car or motorbike and are worth a look. San Rafael is famous for it’s pottery, while the ‘mountain’ village of San Jose is near the highest point on the island.  We visited there and it was disappointing. Nothing really to see except some empty lager cans, grafitti and a token white wash pillar.

However perhaps the most popular (rightfully so) thing to do in Ibiza is to casually drive around the island, stopping at small villages and trying some of the most amazing tapas I have eaten. The food is locally produced and tastes like the sun. Fresh breads and oils, fresh fish and succulent, preserved ham. Beautiful. Doing this by bike is perhaps the best as you can find those more inaccessible by car.  Find your way to a spot on the west of the island for sun down and watch it set over the horizon with a well deserved beer.  We cruised across the length of the island in a convoy of good people. The hot, dusty air running though our hair was perfect for such and orange-brown setting.  The hard grey rock always seemed to be surrounded by a pale orange dirt and brown, dead pine needles. 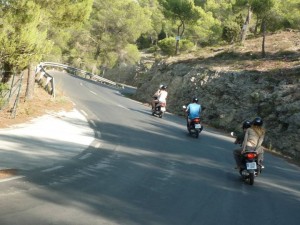 Some of our friends come to Ibiza yearly for what they claim to be the best mountain biking that is in a decent climate close to the UK.  The dusty interior scattered with trees that produce some ace trails are all around, although there are plenty of companies that hire bikes and point you in the right direction.

Other attractions:
The toy train across the north of the island. Last around 3 hours. Good for kids and great for a lazy hangover day!

The Hippy Market is supposed to be good, but in reality it has turned into a tourist attraction and the goods are fairly high price. If you can make friends and hangout with some of the good people who are part of the strong hippy culture on the island then you will have a quality time experiencing the island like few others do…

The Hacienda:  A 5 star hotel on the north-west coast. Ideal surroundings to relax and have drink, while feeling like a person of distinction.

The largest club in the world with great light shows and fanfare, dancers and rediculously priced drinks. Famous for it’s open air club nights in the 70’s and 80’s as well as being home to Manumission.

Home to the “cool and ophisticated clubber”. Pacha is perhaps the most well known clubbing brand and offer well known nights like F*** Me I’m Famous, which suits the ethos of the club

Bang smack in the heart of San An Eden is one of the newer super clubs, but has held its own with Judge Jule’s regular Judgement Sundays and playing full power trance and offering $5 bottles of water- half the price of the others.

The interior decor of Es Paradis will blow anyones socks off, including those who have seen it all before. A maze like garden and fantastic styling of the rooms including the pyramid dome. Water parties are what it is all about and cannot be missed.

Voted the best club in the world a few times by the International Dance Music Awards Amnesia is really what clubbing is about. The main room is a massive space with powerful lights and the infamous ice cannons. This room is made by the foam parties, which are so much fun. The backroom is a dark cavern that suits a darker style of music, but is perfect combined with the euphoric trance in the main room.

Bang smack at the end of the island’s airport runway, this club is the original in underground clubbing. However today it is too well known for this accolade as Circo Loco puts on a well known night that draws enough clubbers to pack the venu full. If it is after-parties you want then head to DC10.

Carl Cox’s home and one of the icons of Ibiza clubbing. The terrace is fantastic for watching the low flying planes coming in and the 6 massive rooms will have you lost in no time. Expensive yet immense.

Such was its success the night needed to upgrade to the newly branded Ibiza rocks hotel, which takes place in the courtyard of the hotel. With fairly cheap drinks things can get interesting when people decide to go for a swim in the pool, which is not encouraged by the staff…

In the heart of Playa d’en Bossa this newly branded club hazs invested in a quality line up to compete with the other superclubs. 1000 people can now experience a quality electro/ commercial trance line up full of well known names.

A different night featuring quality electronic tunes with an elecro edge. Gala night is now famous for Zoo project, which is all about daring fancy dress.

The old home of Hed Kandi and Miss Moneypennys El Divino may be forced to shut if plans to distroy the pier it sits on goes ahead. Nights have fled and yet the cool yet not so intense music makes this a cooler place to be seen.