Thoughts on coming back to England

Big Ben, Tower of London, London Eye, South Bank, Houses of Parliament, Leicester Square, Crown Jewels.  There is so much to see in London.  Visiting the capital  is fantastic and it is unsurprising that it is the second most visited city in the world after Paris, attracting 14.7 million people in 2009 (Wikipedia).  London is an iconic city, an old city and one that is truly remarkable in its cultural diversity and the things that can be visited and seen.

We landed in Heathrow still glowing from the 35C heat and bumped our way through low cloud, the standard sign of drizzle. That is the annoying “really wet rain” that you barely feel but gets you drenched.  Emerging from above the radiant cloud line into the grey capital of the UK is not unknown, but happens more often than not.  Groans break out amongst the Brits on the plane and the usual, very British, conversation breaks out about the weather and how awful it is.  We are home. It is certainly so different being a citizen than a visitor, as you see the negative sides of your country, where-as visiting another country everything is new and exciting!

The queue to enter the country was predictably long winded and lacked the regimented efficiency that we saw in South East Asian countries.  However we received a broad smile and I was the butt of jokes around a significant growth of facial hair compared to my passport picture. “Aye, I can see it is you from your eyes… go on then. Welcome home.”  A jovial natured smile and greeting that makes you feel warm inside and think that the British are not that bad after all.

Then you reach the underground. 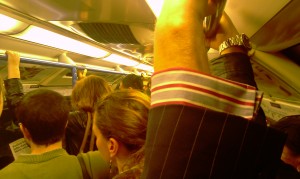 This really is a can of despair. A tin of festering resentment.  6 tubes pass us heading the other way, as an echoed message rattles around the concrete station, apparently apologising for the delay in the service. Usual nonsense that one could barely hear and understand being English let alone a foreign visitor.  We eventually piled on, greeted by the free Metro newspaper being strewn all over the place, torn up and trodden into the dirty, wet floor.  Within three stops the tune is full and with every stop more and more people cram on, pushing and leaning in as much as possible.  My face is in someone’s arm pit as commuters look at me in disgust having a large rucksack between my legs like I am a scum bag.  “Move down please!” someone cries! “I can’t a bag is in the way!” comes a reply about my bag apparently being obstructing. As I gave a loud verbal rebuttal the guy moves around the bag to free up some space.

We eventually have to barge everyone out of the way, as predictably no one will move out the way  easily, due to being crammed into a temporary equilibrium that we have just shattered.  Literally bursting out of the doors into the grey, dank, blustery, and sodden city center we look up, take it in a smile. However within the first 2 hours of being back we understood instantly the stress that is associated with living in the UK capital city.  After being hit with a new oyster card fee of £5, a top up of £10 and coffee for £2.50 we have already spent more than our average daily budget spent anywhere else in the world in just 2 hours.  Plus the experience was not even pleasant. 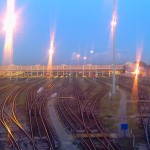 We strolled down Boston Manor road, a tree lined street of beech that has started its autumnal leaf shedding. Broad yellow and orange leaves dropped sporadically around us as we scuffled through the piles of brown slippery leaves underfoot.  The beauty of the city is that houses here all have their own character.  The Georgian houses with twin bay windows stretch down the road in uniform precision. Each well maintained with clear white paint, dulled by the miserable weather.  Despite feeling dirty actually this part of London is well organised. A few rubbish bags rest on the trees, but most kept inside properties walls. The fly over and GSK building in the distance is iconic of the commercial nature of the city, despite being in the leafy outskirts of central London.  We turned the corner as a snake bus hums down the road, boasting about its new duel fuel capabilities and reached our friend’s house. A haven and broad smiles that we need after such a long journey.  Ready to get back into the London life, make our future plans, but first have a rest, catch up and a good old cup of English builders tea.