Day 3: Geysers and Volcanoes of Bolivia

We woke the next morning in awe at the Hollywood-esque landscape. The dawn was just breaking and it seemed that the rainbow was being pulled by mother nature skyward. A dark blue was undercut by a faint yellow, when in between them an orange appeared, followed 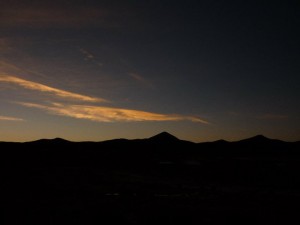 by a pink in between, then green, purple and finally the bright yellow of dawn itself. I have never realised that the morning sky uses all the colours of the rainbow, yet in a different order. Why is that I wondered, freezing in the biting cold of the Salar desert. The only respite was a hot instant coffee and cigarette.  It was 5:50 am and we were greeted with a table of fairly hard bread, instant coffee, all herbal teas and jam, as well as dulce leche (a sweet spread made of milk).  Thank god it was a warm night and a lot better than we had reports of, as otherwise a cold breakfast with just poor quality coffee was not going to cut it.  We didn´t give it much thought when we set off though, back through the moonscape and grinding through crunchy, rocky muslike substances heading south towards the desert of Bolivia.

The ground was inherantly different from now and we realised that we were in relative luxury yesterday crossing the Salar de Uyuni, as now we were rattling across what might as well have been a cattle grid.  The road was all dried dirt and had made a similar formation to sand on a beach- ridged one might say.  For the next 3 hours we rattled along south towards the desert.  The cold crispness of morning gave way to the baking heat of day and I was sat in the window without the ability to open my window.  Either way things like this made the journey more challenging, but that was all.  The scenery more than made up for it.  The white capped ground gave way to more and more grainy sand.  Mountains that looked fairly small due to our inherant height each had its own marks. Lines of different colour showing off the fault marks gave each a unique character. 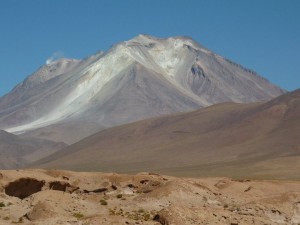 Soon we were climbing across a range and the terrain became more difficult, slow and rocky, higher peaks were appearing with snow splashed across them in various voids.

Finally we reached our first destination the Olague Volcano, one of the few active volcanoes in Bolivia, lightly spewing smoke out of a vent to the left of the main peak.  The surrounding landscape was incredible as it showed off the fact that the volcano had shot lava all over the place.  Splatters of rock made amazing layers and patterns on the ground made of solid rock.  The stop to take in this master piece of nature was too short and just 15 minutes.  Yet it is something that is imprinted into my head for the rest of time to come.

Just as we were leaving another jeep parked up and as we knew they were on a similar schedule to other tours we knew that we were on a 15 minute head start.  We headed off further south to our next destination, crawling between this collossal range of the Andes mountains,

where the temperature was climbing quickly and feeling ever drier.  In another hour and a half of rocking from side to side through the volocanic rock, past Llamas and yet more peaks of various colours and shapes we reached Laguna Hedionda, a haven for flamingoes.  It was at this point we really appreciated being first, with no other jeeps in sight, unlike in the Salar de Uyuni the day before which felt like a holiday park.  The lake was completely calm in many parts and perfectly picked up the reflection of the surrounding Andean range and the flamingoes themseves.  A truly stunning scene and a wildlife geeks dream.  I have never seen Flamingos before but they sound like seagulls and despite their faces looking pretty ugly are really majestic in their movements. On the lake itself were salt deposits as well as a thin layer of ice from the night before, which was surrounded by a short and hard as nails moss.  The lake itself showed off its rich mineral content through sediment in the shallows, through giving off a unique, boggy smell and being swampy with a rice brown mud. 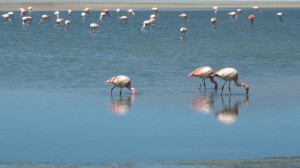 We headed off again as two jeeps arrived in unison this time after jeeing up some of the guys who were too enamored with the scene to appreciate our need to keep ahead of the pack. The next stop was only a half hours drive away and another in a chain of 4 Lagunas each 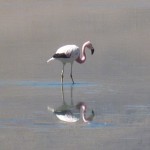 with different scenery, Flamingos and sediment properties. This one was giving off a distinct smell of methane and it was forbidden to smoke anywhere near the lake. I wasn´t going to argue with that. We stopped for a 45 minute lunch break of 2 cans of tuna to share between the 6 of us, rice and tomato and cucumber salad. We all made a basic but surprisingly filling rice salad with mayo and set off once more into increasingly vertical and rough terrain. We past another lake of similar characteristics to the last, but everyone decided to continue as we were a bit “laked out” at this point.

We swayed erratically down past the lake and in little time the road became less like a fair ground ride and more like driving over a permanent cattle grid, but this one was made of sand. We had finally reached the plateau of the baking and barren Siloli desert. The jeep was getting a battering as we followed the tracks of numerous jeeps that had travelled before us, hundreds of lines carving in some kinds of unison into the shimmering distance of the intense heat coming off the desert. It was a desolate feeling and soon we started seeing dust devils in the distance whipping up columns of sand into the air and in the middle of a massive expanse of yellow they really do look like spirits coming to get you. Each time our driver saw one he rubbed the plastic cross hanging from the rearview mirror. 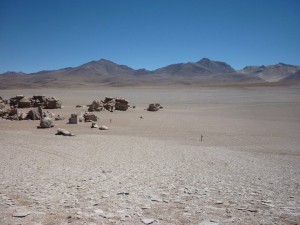 The reflectivity of sand giving off immense amounts of heat is truly magical. At one point Laura and I saw a small lagoon, which we were surprised at, but when we drove closer realised it was nothing. A mirrage. Neither of us have seen one before (if you can call it that!), but we were amazed at how real it looked and how out here the reflections of an expanse of uniform nothingness being reflected about affects what you are seeing. Another jeep came into view ahead of us, but our driver was not to be outdone. Taking the “inside route” we kept our lead and after about 2 more hours of driving with the windows up to stop sand coming into the jeep and baking we arrived at the Arbol de Piedra or the stone tree. This is a rock formation that looks like a stone tree 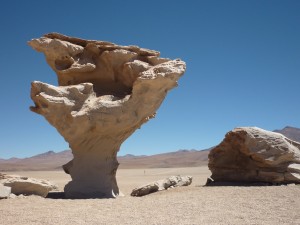 as the erosion has been a lot greater at the base than the top, but there were many other amazing formations carved out by the sand blasting wind that was now driving sand in all our faces. We scaled some of the shapes that people were picking out, which was easy because of the ace grip igneous rock gives you. The other jeep arrived and, we were thankful needed to change a tyre. This gave us more time with the rocks in the most isolated, 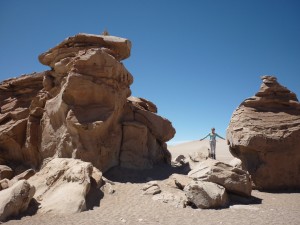 harsh place I have ever been to and to regain a good lead once their tyre was on.

We set off at about 2:00pm with another long drive to our next destination- Laguna Colorada, 4278m in altitude (22.2 S, 67.8 W). More and more desert was all we could see en route, with mountain ranges that melted and merged with the horizon line to make it impossible to understand exactly what you were looking at. Finally though at around 3:30pm we made it to another incredibly colourful mountain range with what seemed to be every pastel shade conceived. Upon slowing down to reach the barriered entrance to the park, we could see at least 4 dust devils in a row being twisted out of the salt desposits to make them bright white.

We had to pay 150 Bs (15 pounds each) each to get into the Reserva Nacional Eduardo Avaroa Park and so got out of the jeep into the forceful wind coming straight through a gap between the mountains from the Atacama desert on the other side. My lips were already as dry as gandi´s flip flop, feeling pretty much as cracked as the ground surrounding the lake we were now looking at, and this would not help. This is where we would be sleeping and so we took our bags into a, what they describe as “basic hotel”. This means there are holes in the ceiling an old wood burning stove, no running water or toilet flush and poor insulation. The wind outside was increasingly steadily and it was at this point that I was so glad to have my poncho. Local people do not wear their indigenous clothing for a laugh. It really works.

We had time to explore the Laguna Colorada, which is given a really bright red colour because of the red algae that 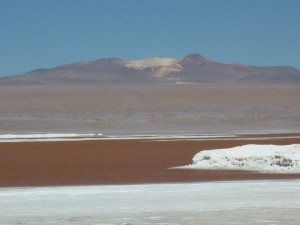 lives in it.  Again the colours here are trualy spectacular as the lagoon is bright red, with sparkling white salt deposits forming banks on the lake.  The surrounding is covered in the patchwork of green moss and then you have the surrounding colour of the mountains.  Add to this the now grey brown rocky ground and you pretty much have most textures and colours covered in one dramatic landscape.  Laguna Colorada was up for being voted as one of the wonders of the natural world, but I believe that as the voting was held in a technical imperialists world of the Internet, most Bolivians couldn´t vote.  Unsurprisingly then it didn´t win, but probably should have made the top 10 since it is easily better than the figure of Christ in Rio (we will confirm this last when we get there).

Laura and I took a stroll around the lake to capture some dust devils on camera, but mother nature was not interested in that idea, so we headed back for tea.  As dusk drew in the wind and cold increased to a fervor.  Going outside drained any warmth you had and all of use ended up waiting for dinner in 2 layers.  It was to be a cold night.  Finally one of the Brazilians suggested his bottle of vodka to stave off the cold.  That worked and soon we were all discussing foods from our respective countries in anticipation of our evening meal.  Once that came conversation soon turned into the usual when a bottle of wine… for 6…. generous came out.  Politics first and then religion.  We hit the sack at around 10:30pm ready for an early 4am start the next day.  All of us were wearing hats, and at least 3 layers as well as the 4 thick blankets provided.  Getting out of bed in the morning would be a challenge for sure!