The train from Oruro to Uyuni

How the Earth can look like this is truly awe inspiring.

We finally set off on the trip that we had been looking forward to the most in South America.  We had met a guy outside the front of the closed tour office who was French and had lived in Guyana for 7 years and set off telling us about what he had been up to travel wise during that period, as conversations tend to start when you are travelling, “where have you been?”. We were starting to get a bit worried after 40 minutes of conversation when the lady who we had bought the tour off had rushed off muttering about a jeep.  We were still 2 people down after a Brazilian guy turned up.  After being rushed into the jeep we realised that the 2 missing were already in there- two more Brazilian guys.

We immediately headed out to the train cemetary, where a whole freight train was left to rust and decay. It was incredible to see the 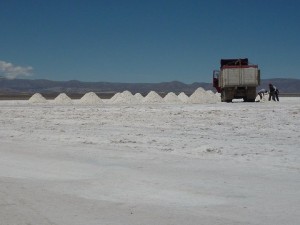 decrepid train, with the back drop of dusty flat land and snow capped mountains in the distance. It was a really quick stop before getting on our way to the salt flats. For 15 mins we added to the gringo population who were all enjoying the train as a mammoth climbing frame.

Back in the jeep we whizzed off to our first destination, a small pueblo who survived on the profits of the artesian market with all sorts of nick nacks made from salt, as well as some knitted items. I finally gave into temptation and bought some leg warmers.

Finally we set off to the beginning of the salt flats. Volcan de Sal, an area where salt is dug from the plane into piles weighing a ton each, and left to dry in the sun before transport to a refinery then to your table.  Here was were we saw our first of many dust devils, this one we managed to capture though…it proved difficult from the jeep window later on in the trip! It was a fantastic feeling to finally be on the salt flat, such a vast incredible place. 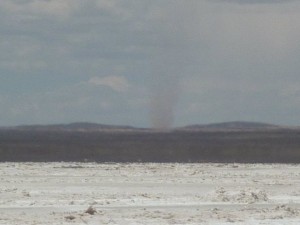 15mins later, we were back in the jeep sped off into what seemed like nowhere. Before long a black dot on the horizon came into focus. It was a salt hotel, where we had our lunch, prepared by the driver. 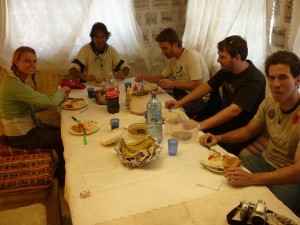 The place was filled with jeeps with people of the same tour as us. Young people everywhere going mad with taking photos and playing around with the scale. Inventing silly poses. Al and I could resist attempting this too, alothough didn´t have much time for it at this destination, and had to wait until Isla de los Pescados.

Isla de los Pescados (3653m, 20.243 S, 67.625 W) – The name originates from the fishlike appearance of the island’s reflection in the wet season. In July 2006 it was still possible to visit this island, which is an island of fossilised coral covered in 1000-year-old cacti in the middle of the Salar. These cacti grow at a rate of 1cm per year, so you can easily calculate their age.

The drive to Isla de los Pescados was weird, we were surrounded by flat white land with nothing on the horzon, just blue blue sky. We all started to nod off as it was hard to keep our eyes open with the lack of things to focus on. All apart from Al, who was chewing coca leaves. He even noticed the diver nodding off at one point when the jeep started to veer away from the previous jeep tracks we were following.

Eventually a mountainous shape on the horizon began to show itself and gradually became the prominent thing on the horizon. As we neared it, it became evident that it was  Isla de los Pescados as the famous large cactis became visible. The large old coral is covered in ancient cacti, including the oldest in the world. Around this formation in the salt flats we had been so excited to see. They really are vast, with mountiains on the horizon that appear to float due to the curvature on the earth, it plays with our eyes. The repetative hexagons from the salt chrystalization was also captivating, and added to a landscape that is truly magnifiect. We stayed here for a good hour with the oppertunity to climb the coral. We chose not to as we were quite happy soaking up the surreal aura of the place without paying an additional fee. There were several jeeps all with the same schedule. Again, the young groups of people were playing around by creating funny photoraphs. The vast expanse of white was like having a blue screen and everyone temporarily transformed into compostitional photographers. Really very funny to sit back and watch! 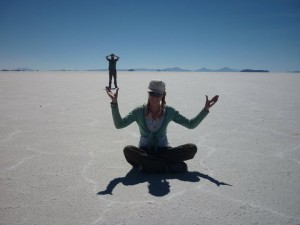 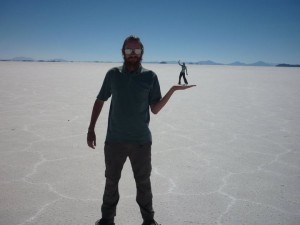 As you can see, we couldn´t resist having a bit of fun with this too!

The time here got very intense after a while, with hardly any shade and being extremely high plus the reflective sun, we were searching for shade around the jeep. An incredible experience there, but glad to get in the jeep and move on after the hour. Our final destination was the salt hotel for the night. The drive became for bumbpy and difficult as we departed the salt flats. Dust devils were picking up in the distance, which of course Al was mesmorised with. As we approached a collection of buildings in the middle of nowhere we weren´t aware that they were actually the salt hotel, where we would be spending the night. Al had been commenting on how he would love to stay at these buildiongs so that he could enjoy the dust devils out of the jeep. So, of course he was pretty chuffed when our jeep came to a stand and we all disembarked.

As we entered the hotel, we had the most lovely warmest welcom since being in Bolivia. A little girl ran out and hugged us. Clearly excited to see different people in this lonely place. The ladies working there were equally happy to see us and couldn´t resist giving me a bear hug. They were a little hesitant with Al at first, as it is frowned uppon to have facial hair in Bolivia. But they soon warmed to him. They were really amazing people, so happy and always laughing. A true feat in such 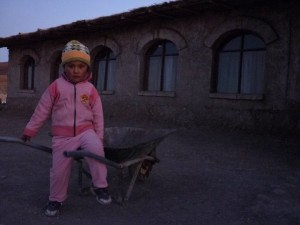 a desolate and unforgiving place. The little girl insisted on all of us giving her rides in their wheelbarrow, which she took immense pleasure in. When it came to the end of my go, she tried to give me a ride, and really did believe she was strong enough! Undefied, we were all in fits of giggles with the company of this cheeky little girl. It definately added to the experience.

The hotel itself was great, Al and I had a matrimonial room with a really comfortable bed. The toilets and showers were clean and more than sufficient. Inside it was warm, a surprise after reports of people being absolutely freezing for the entire trip. What really made it amazing was that somehow we managed to loose all the other jeeps full of tourists and our group was the only ones staying the night. Goodness knows where everyone else stayed! This allowed us to embrace the company of the worked and made the whole experience much more personal. 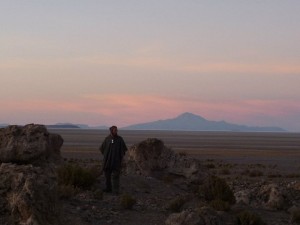 That evening we enoyed a fantastic sunset with the salt flats in the distance. We enjoyed a fantastic soup and chicken dinner with a coupl of beers. All feeling like we had caught the sun, we were soon drowsy and ready for bed. A couple of boys from the community came to entertain us with a drum and windpipe. Unfortunately it was dreadful and help some headaches along that´s for sure. We all made our excuses to escape the torture and went to star gaze before bed. The start gazing was actually a bit dissapointing, with not only a very birght moon, but the light reflected from the salt flats actually really affected the visability. Either way, the perfect silence of the night was like nothing else. I don´t think I have hear ´nothing´quite like it before. It was the perfect ending to a brilliant day.