After a long 9hrs we finally rock up at the outskirts of Cuzco. A great view of mountains surrounding the city, keeps us captivated as the bus navigates it´s final manouvres into the station. We share a taxi into town with an Austrian couple which helps the ´gringo fare´that the taxi driver attempts to charge us.

As soon as the Austrian couple (and we) walked through the station we were bombarded by people trying to sell us a room, handing out flyers. Al and I are pretty numb to these tactics and tend to ignore these offers as there always seems to be a catch. Nevertheless the Austrians was impressed with their offer of 25 Soles per night. It sounded reasonable, but we decided not to follow them once we had reached town. We always prefer to shop around.

It became apparent immediately that we had been dropped in the tourist part of town, and after a few inquiries we realised that in Cuzco the price is per person per night. Bloody hell, that´s at least 50 soles per night! Double the maximum we were prepared to pay. We eventually found a Peruvian hotel owner that seemed nice and was prepared to haggle for the room. Our Indian negotiation skills definitely payed off. Al was even impressed at my persistence! We got the price down from 30 Soles pp/per night to 12.5 Soles pp/per night with no breakfast include. Wow. I certainly get a buzz of a good deal I thought! Just to make sure we had no better offers anywhere else, we went to the hotel the Austrians had headed for, and yep they had settled for 25 soles each including breakie. That was a good confirmation for us, so we headed back with our heads held high that we weren´t getting the average gringo price! Our room turned out to be at 3 tiers up, with an amazing view of Cuzco and the mountains beyond. Exhausted after the bus journeys and haggling with heavy bags we enjoyed the last of the evening sun with a cerevesa (beer). Ahhhh. 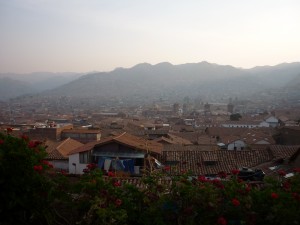 Heading out for dinner we were in dismay pretty quickly. This was Gringo town, everywhere we looked, there were Dutch, Aussie, French, Spanish, German, English and definitely last but not least Americans….everywhere. The was a bit of a horrifying moment for us. We had been enjoying the lack of tourists in India and so far in Peru.  But for the time being, we had to accept that this is what happens when tourism has taken a hold on a place, and being a base for the trekking to Machu Pichu, I guess it is hardly surprising. We embraced it after finding a fairly cheap Menu del Dias (Menu  of the day) where we ate alpaca (delicious, shame they are so cute!). By émbraced´it, I mean, we enjoyed the happy hour offers that were hard to avoid on the main plaza. A pisco sour and several rum and cokes later, we found ourselves in a Latino club. We were the only girngos there appart from some Dutch guys from Rotterdam. We had an ace night soaking up the Latino vibe. Going out on the town is something of a rarity with a daily budget always in mind. So this was fun for a change, and we knew we would be scrimping and saving for the rest of the week because of it. But it was worth it and I think Al can say his old man hangover was worth it too!

We din´t like the fact that we  were contributing to the vast amount of gringos everywhere so on our first morning there, Al was quizzing the hotel manager where the locals eat. We were recommended a 2 markets not far from us, a street where the Menu del Dias was only 2.5soles, and a place out of town famous for their Cuy (guinea pig).

Market no1 turned out to be a gem of a place. There were a few veg stalls, but on the whole it consisted of juice and coffee stalls, as well as lunch stalls where they served Menu del Dias for 3 soles. The women who ran the stalls were so friendly and it was a great place to practice our Spanish whilst sipping on a freshly squeezed orange juice! We even met some super cute baby alpacas, I couldn´t resist the touristy photo this time! 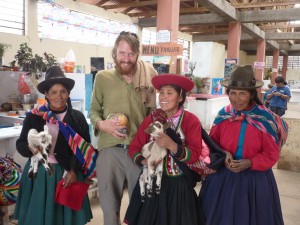 Market no2 turned out to be more catered towards the gringos, but nevertheless, we picked a few bit up ww had been looking for. Cocoa leaves, and two woolly hats. It is really really cold here at night. Don’t worry, Al didn´t buy this hat, although I think it would have been a wise choice considering his Antarctic trip coming up! 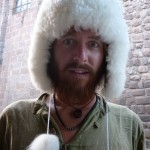 We discovered later one that another perk to our hotel, was that we were allowed to use the kitchen. So with the help of the markets, we managed to pull our budget back during our week in Cuzco by making dinner oursleves.

On our hungover day, we drifted from one market to another, and in between giggling at the tourists. Especially the Americans with their sandal and sock combos, canvas hats and ridiculously expensive camera equipment. We had considered going to the out of town Cuy restaurant, but didn´t think our stomachs were quite up for it…tomorrow we told ourselves. 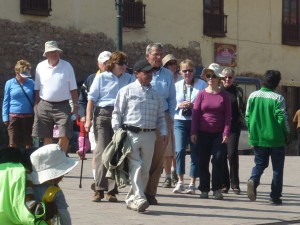 Day 2 in Cuzco we spent the whole morning battling with Voegol´s website (Brazilian airline), trying to book tickets for later down the line. Eventually we succeeded, drained from staring at the screen, we skipped breakfast and caught a taxi to the Cuy restaurant called Maqueguana. On the outskirts of town, we hadn´t seen a white face in the past 10 mins of our taxi ride, we were dropped high up on the side of a mountain. The restaurant had a panoramic view of the city. Fantastic. We ordered the only thing on the menu; fried guinea pig and a cerevesa. We were told it would take 1/2hr, which was fine with us when the view was a brilliant distraction to our imploding stomachs. Within 15mins of arriving, the restaurant was filling up, and betime we left it was rammed. We were chuffed to have found a true local place, no gringos in sight! 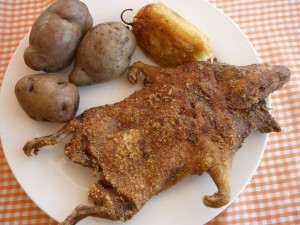 The guinea pig itself was something that I am proud I managed to eat, but I now know that I don´t like it and wont order it again. But, it was one of those cultural experiences of Peruvian food that outweighed the unpleasant boney meal. Al being Al, embraced his caveman qualities and although later admitted he didn´t like it much either, had successfully eaten all of his, and the half of mine I couldn´t face!

We enjoyed catching a combi (local mini bus) back to town, and soaked up the warm sun as we ambled through the cobbled streets. Meandering back to our hotel slowly, we chilled out on the main plaza for a while. It felt slightly the same as India, as within seconds people were trying to sell us things…not so relaxing unfortunately. All the same, Cuzco is beautiful, with grand spanish architecture as well as ancient inca architecture (thick stone walls). In the main paza especially, there were protests, that seems more like celebrations. With the run up to election time, the plaza always seems busy with political promotions going on.

Day 3, and what we thought would be our final day, we got up early and trekked about hour uphill out of town to the Sacsayhuaman ruins. These ruins are believed to be an Inca temple facing where the sun sets over cuzco. It was still cool in the air and was a really nice morning walk. When we finally reached the ruins, only Peruvian students appeared to be there. It was nice that we seemed to have avoided hoards of Americans in coaches! It turned out that we had to have a combi ticket worth 70 soles, which would get us into other sites, such as the main cathedral. We were reluctant to do this and were a bit miffed that we couldn´t buy a single ticket. We chose not to get sucked into this money making scheme of the Peruvian tourist industry and walked to the top of the ruins, by walking around the site and down a public path through farms. We found the perfect view of the site and enjoyed sitting on a protruding rock that was public property. We really felt that we had enjoyed this as much as trudging around past big tour groups. We even watched the students use an old eroded rock as a slide…I was happy I hadn´t paid to watch them contribute to the destruction of such a magnificent place. Instead we enjoyed the morning sun and aura. 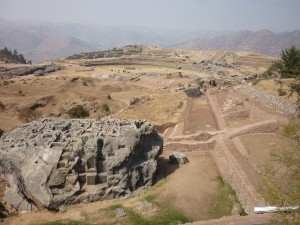 Looking forward to paying our favourite market a visit for lunch after our trek, we are dissapointed to learn it is closed due to a strike. We can hear protests from our hotel, they hardly fade or die out. They seem constant. It transpires that there is a 48hour strike due to lack of water in Cuzco. This means, no public services, no buses out of Cuzco, no markets or fresh produce  in Cuzco until the strike finishes.

We had been planning to leave the following day to Ollantaytambo to begin our volunteering work at a hostel. With no combi mini buses leaving, we resign ourselves to another day in Cuzco. Which isn´t a bad thing, we have enjoyed it. It has been a good challenge to avoid to the gringo path. The amount of times we have been asked by locals ´Machu Pichu´and we have said ´NO! Muy Touristas e Muy Carro!´( Too touristic, too expensive!)

We enoy a couple of beers watching the sunset from our terrace and decide that our final day in Cuzco can be spent tieing up loose ends and writing all about it. I now think I am deserved of one last happy hour Pisco Sour in the evening sun before we cook Pasta ala Al e Laura at the hotel.  Hasta Lluego Amigos!