Ingredients around the world – Tapioca

Culinary Paris and the under discovered Gems

Culinary and Paris goes together like peas and carrots.France is known around the world as the capital of gastronomy.

Whether you believe that or not could never take away from the fact that the vast number of cafes to the Michellin starred restaurants are based on fine ingredients and fine preparation that results in fine food.

We sampled a range of different eateries around Paris, with the help of our good friend Philippe.  Philippe is the epitome of a Parisienne resident who knows and loves his city as well as having a taste for the fine food within it.  He gave us his recommendations for the best places to go, as we directed him of our need to try the most local dishes that are the favourites of the Pariesienne people.  He obliged and what ensued was a weeks food and wine gluttony to another level. I would never have considered spending EUR 120 on souffles!

But before we continue a note about eating out in France and the bill or “l’addition” if you are asking for it….

TVA stands for tax in France, currently variable after the goverment reduced the tax rate for restaurants from 19.6% to 5.5%.  Unfortunately though after the reduction the restauranteurs were not obliged to pass on the savings to customers and so now all restaurants charge different tax rates.  Those charging the top whack still (19.6%) will be the top end places that have high overheads and lower numbers of customers.  We experienced a range of between 5.5 and 19.6%.

Alcohol is not included in the reduction, so often a bill will have 2 lines for tax, one for alcohol and one for food if they charge a different rate.

Service is generally charged as around 15% of the bill and will be stated whether it’s included “Service compris” is what you are looking for. Not mentioned on the bill? Then it’s not included.

Also if you see “règlement espèces” then you need to pay in cash.

Our first stop on this culinary adventure was heading from the north-east quarter to the north around Clignancourt.  The Sacre Cour is a primary tourist destination for good reason and on such a beautiful day, just 2 days after heavy snow and -9C temperatures. From the hill this history rich cathedral sits upon you will encounter a splendid view across the city from the north. The view takes in the Effel Tower and the Arch de Triomphe in line with the arch- the modern version of the arch de triomphe situated in the new business district to the west of the city center.  It is busy and there are restaurants on the hill surrounded by vendors selling portraits and other ‘stuff’. 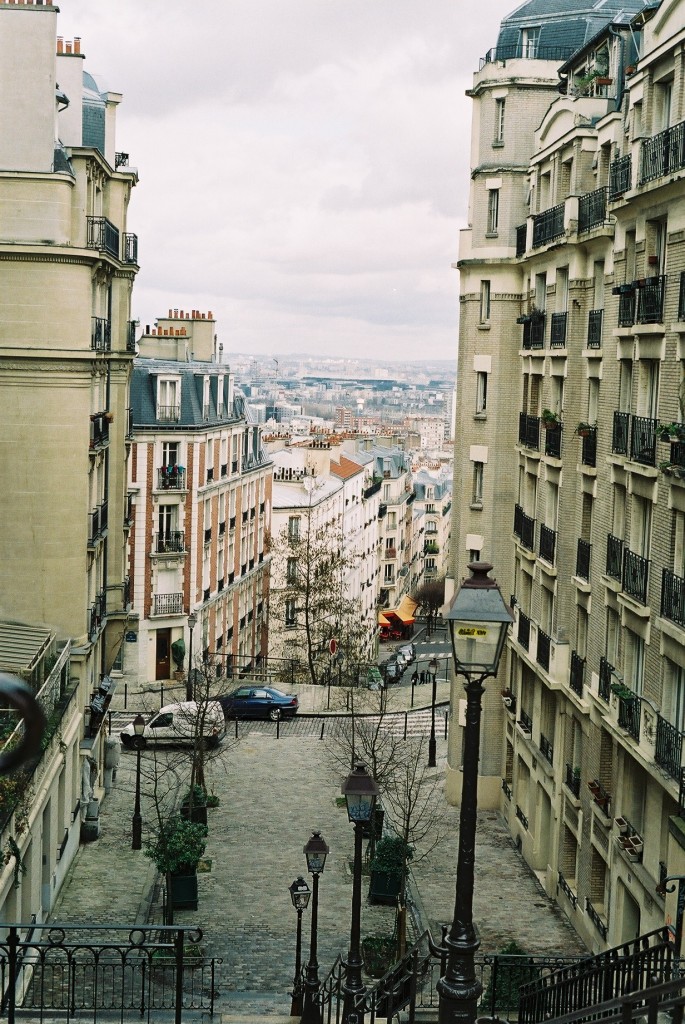 View from the Sacre Cour in Clignancourt

If you want to avoid this and head somewhere to eat with the locals then looking at the cathedral head down two flights of stairs to your right and meet Rue Clignancourt. Turn right onto this road where literally 30 seconds on your right you will see The charming and typically French bistro Cafe du Clignancourt.

This road is steeped in history, but is now known as the rough area of town. So be aware of this.  Yet this means the restaurants are far less frequented by tourists and the food strictly centred on what the Parisiens live to eat.  Here the mainstay is what our friend recommended without hesistation as #1 – Steak tartare.  An incredible blend of roughly minced, lean beef, egg yolk, capers and gurkins. It is completely raw, but served with french fries. If anything.  Please try this. 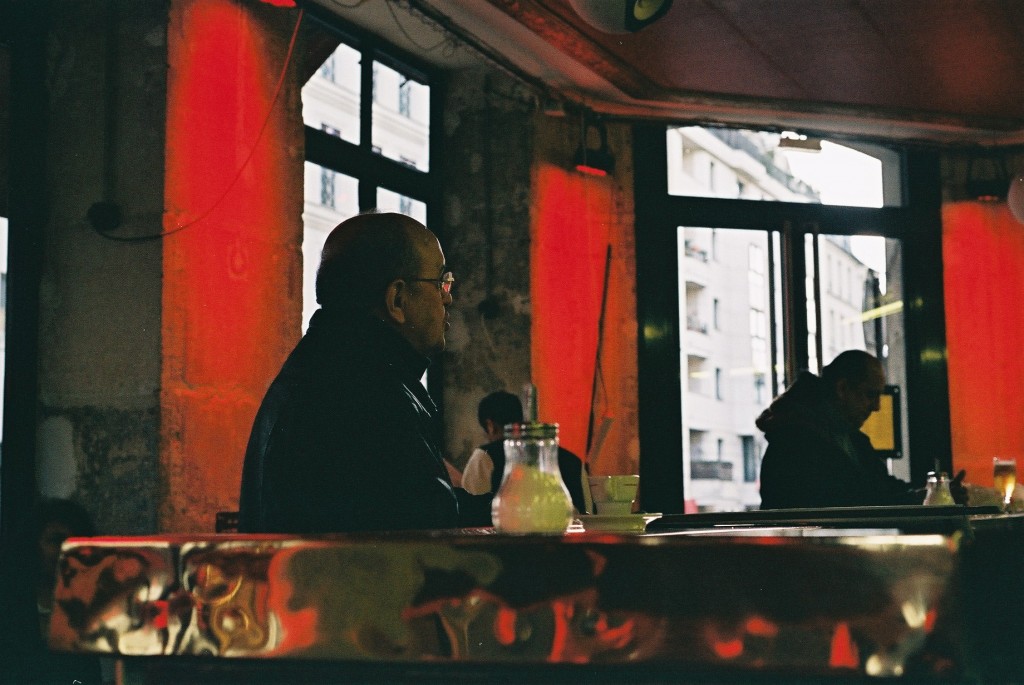 Further to the north-eastern quarter of the city is Porte de Champerret in the 17th arrondissement.  This is a middle to upper class area where business people emerge from typically French buildings, ornate in gothic style, dressed immaculately and heading directly to their favourite cafe for a light lunch and espresso.  Following the crowd we were instantly hit by how busy Le Valentine was, the atmosphere and waitresses spinning around with hair tied back wearning bright red lipstick makes you realise where the stereotypes come from.

We ordered the lunch special the croque monsier, which we were dying to try while in the capital. The interestng thing about the French versions is that the bread tastes slightly sweet and the bottom side of the bread is un-toasted so the whole sandwich is soft.  Complete with well dressed salad garnish and a strong coffee, sat out watching the world go past, glamourous people hurrying by talking in loud, typically excitable French. 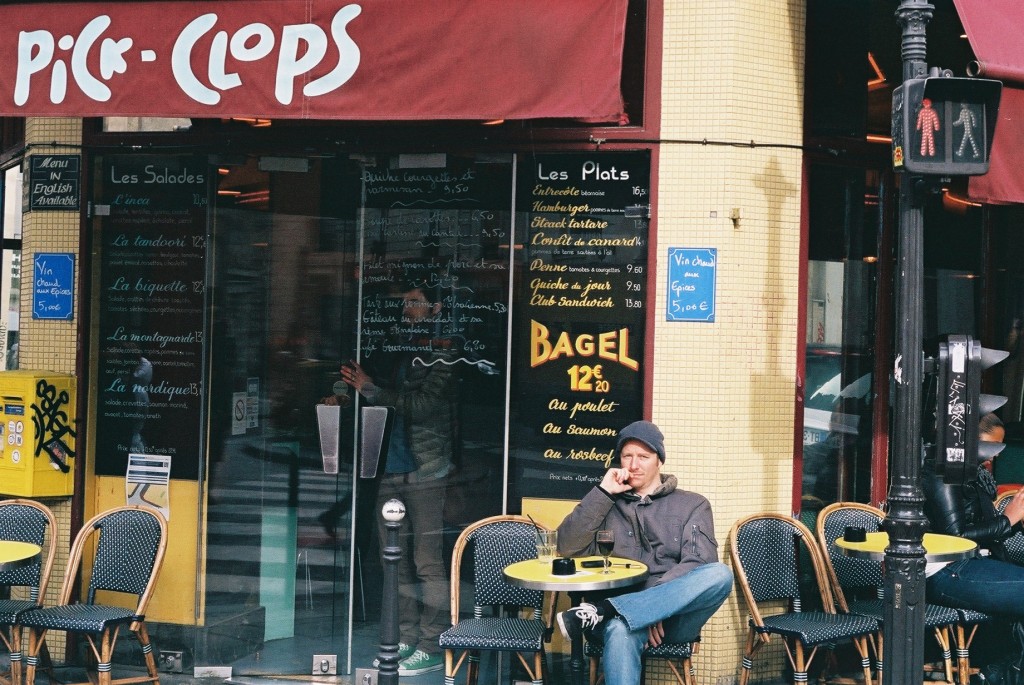 What we ate:
A croque Monsieur (EUR 7.50) coke and espresso

Sant-Germain is the infamous art and artifact area of Paris, which comes to life late at night with jazz, drinks and cigar smoke.  We were advised to head to a cafe called La Palette, but too stuffed to eat, just invested in a couple of beers to while away the day.  The place is ideal for this as it attracts some real characters and beautiful people meeting up, games of cards being played as the waiters watch on.

Although we were too stuffed to eat the cafe serves a short menu of the Parisiene favourites; beef tartare, cheese board, caviar, cold meats and some unusual delights you’ll have to check out!

The place is not cheap, but neither is the area. It is worth mulling over a drink as you soak up the atmosphere though, which is definately what you are paying for here.

Near the tourist area of Bastille there is a few gems hidden off the main street. Les Portes is not really one of them and receives a fair amount of international visitors. However the prices mean the clientele are well dressed and behaved.

Tonight we had a friend’s 30th Birthday so we thought we would eat somewhere more upmarket.  Les Portes was ok, although we didn’t feel it represented good value for money. That said the amouse bouch was a really tasty intense fish with baguette and the mushroom pasta was incredible.

My magret duck wrapped in filo pastry was a little disappointing, perhaps in part because I have had such a dish in so many excellent places and also because of the lack of sauce that was needed.  The wine selection was fantastic however and everyone agreed it accompanied the diverse range of food we were all eating.

So that wraps up our Parisienne culinary adventure that took a week, but realistically only touched the surface of what is available in a city that seems dedicated to food.

If you have any great places you visited and found a little gem somewhere then let us know! We’d love to hear about your experiences….