Northern China Over the Himalayas

An early start in Kratie to begin our journey to Champasak in Laos via the north Cambodia Laos border crossing. With the market so easily accessible I ran to pick up our last iced coffee and say goodbye to the lady who had got used to my visits. Picked up some french bread and then said our farewells to Mao and Star Travel staff.It was a sad goodbye, he had been the bet host in SE Asian hostels so far. He felt more like a friend than someone being nice to us whilst we were the customers with the money.

To reach Champasak we needed to catch a mini bus to the outskirts of Stung Trung, transfer onto a larger bus to the border, walk across the border and get our visa on entry sorted, catch another bus down a dirt road until the first border town (15mins drive) and finally catch the last mini bus to the opposite side of the river from Champasak. Here we then were on our own and caught a little boat across before landing about 2km north of the centre of Champasak. Phew! That is a lot of transfers. 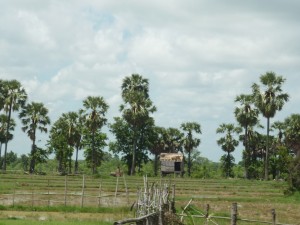 The first mini bus was crammed full of western travelers plus all of the rucksacks. The bus company didn’t account (or didn’t care) that 8 peoples luggage was bound to fill at least one paid for seat. The last unfortunate guy in the bus had half a seat for the entire journey. Along the way the bus driver did the usual village stops en route, where he would do his shopping from his window as he drove by very slowly. Not impressed as we had all paid between$13-$16 for the ticket (either to Don Dhet – $13 or Pakse – $16).  Hey ho, this was part of Cambodian travel, however much you pay I realised. We got talking to a Brazilian girl who spoke about everything to do with Brazil for most of this ride, so at least time went fairly quickly.

All the transfers were smooth and clearly well practiced, despite this Cambodia Laos border not being the most common route and still being built when we crossed in 2011. The visa on entry was no hassle either. There is the obligatory bribe of $2 on the Cambodian and Laos sides of the border which made the total visa total at $40. Pricey, but hopefully worth it. I had heard so many positive reviews about Laos I was sure I would not be disappointed. 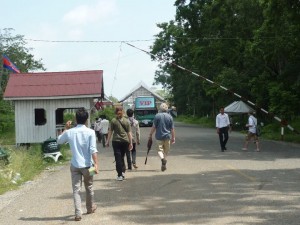 Finally on the Laos side of the Cambodia Laos border we joined the last mini bus after waiting for it for 30 minutes or so to fill with tourists, before setting off. The heat was stifling and is was difficult when the bus stopped as the 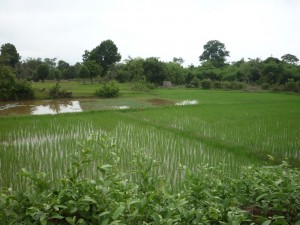 air would just stop flowing. It was only an hours ride until we were told we were at Champasak. After we offloaded the bags from the roof we found out that actually Champasak was on the other side of the river. A little disgruntled that we had paid for a ticket to Champasak yet we were being to told pay extra for a boat across. Unable to do much other than swallow it.

Al and I climbed aboard a bamboo raft with an outboard motor attached. At first he tried to charge us 30 000 kip each but then gave us the more reasonable price of 10 000 kip per person.

On the other side of the river a large Lao man greeted us in perfect French. As Laos was part of the French empire back in the day and actually a fair number of French people still live in Southern Laos.  He persuaded all the french (everyone else) to come to his hostel. So they all climbed into his rickshaw and sped off. We wanted the freedom

to see what places were around. Plus we didn’t mind walking after sitting down all day. So we set off down the main road which was an incredibly quiet dirt road towards the centre. On the way locals waved and greeted us, including a group of men who beckoned for us to join them for a beer. The heat made this offer tempting, but we declined. The first thing we needed was a room and closely following with a cold shower!