Of baseball and karaoke

Recipe Book of Dishes from Around the World

If India and Japan are polar opposites then Beijing nestles somewhere in the middle of the spectrum, mixing the old, traditional Asia with the new, all-shiny Asia. I have to say, it’s one of the most fascinating cities I’ve ever been to in my life.  Anyone that’s been to Beijing will tell you that its fascination lies in its contrasts – there’s an almost chaotic blend of the recognisable and the utterly foreign, mystery and simplicity, wealth and poverty, the ancient, fake ancient and modern. Just looking down its streets these juxtaposed oppositions are so apparent. One minute you’re shielding yourself from the glaring brilliance of  huge high-rises, then you turn into a dark little alleyway and find yourself in a raggedy traditional hutong, where women are hanging out their laundry and men are gathered around a game of mahjong, sipping at some lethal ergoutou.

Our hostel, which was in an old hutong

Since the founding of the People’s Republic, the Chinese government has been controversially demolishing the old hutongs in their maniacal rush towards  ’progress’ – particularly in the run-up to the Beijing Olympics, where China was very keen to present an impressive, ultra-modern stage for the world. And, this being a communist country, the government can do pretty much whatever it likes with people’s homes as the state has a say over all property. That said, they’ve also seen how the rapidly-depleting hutongs have become a bit of a cultural attraction, so although the outcry of their uprooted inhabitants might not count for much, the tempting gleam of foreign currency has persuaded them to re-build some of the demolished hutongs. This leaves the city a slightly schizophrenic patchwork of genuine, ancient, jumbled alleyways,  ruler-straight new roads and ersatz rebuilt hutongs, sanitised with ‘improvements’.  Of course the rebuilt hutongs don’t have nearly as much character as the real deal, but the policy seems to be progress at all costs. Adapt or die. 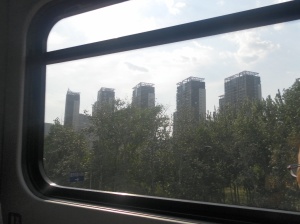 The new face of Beijing, seen from a window on the Airport Express

It’s a very interesting time to be in Beijing then, as the country hurtles towards progress while still retaining its mysterious ancient character. The government itself is a contradiction in terms – desperately pressing ahead for Western-style development, whilst holding on to old-fashioned communist control. Money talks in this liberal, capitalist economy but people still can’t, with no freedom of speech or freedom of the press, and imprisonment of investigative journalists, environmental activists and anyone else the government doesn’t take a fancy to  still going on. Having been in Beijing for all of 2 days, I developed a sudden unprecedented interest in politics and economics. So here’s some random facts about Chinese politics and society: Despite having the world’s fastest-growing economy, widespread privatisation (surely in itself a contradiction in terms for Communism?)  has meant that many older people have lost their jobs in state-run enterprises, so the unemployment rate is high amongst all ages as they compete with a surplus of highly educated youth searching for too-few jobs. However, there is not much social security to speak of – also bizarre for a Communist state. Dan and I went to see a play before we left, which was set in Beijing, and featured a British race car driver who finds himself entangled in the confusing web that is Chinese politics and progress. In one scene he is venting his frustration at a Chinese journalist he’s met, who simply says: “Ah, but this is China. Nothing is straightforward. Nothing is as it seems.” I can kind of see what he’s getting at now.

It seems a bit like the government have simply done away with all the potentially ‘good’ bits of Communist ideology (you look after the state and it will look after you) and kept all the ‘bad’ bits – no freedom of speech and general rigid control of the population. That’s not to say that people don’t fight back – apparently there were 74,000 violent protests recorded in China in 2004 (although the government would probably not widely report these)  – most of them over illegal land seizures  and environmental issues.

A restored hutong near our hostel (left)

Speaking of which – the World Health Organisation puts the ‘safe’ level of air pollution at 20 micrograms for a city. In 2007 Paris had a level of 22, London 24, New York 27 and Beijing weighed in at a massive 140.  Presumably things were cleaned up a bit  for the 2008 Olympics, but even so, you can see why the Chinese are concerned about their environment. China also suffers from water shortages – particularly in Beijing. They may have high-speed bullet trains and sophisticated shopping malls but you can’t flush a toilet. Equally as worrying is the fact that due to overgrazing and deforestation west of Beijing, every month 200 square kilometres of arable land become desert as the Gobi desert’s dunes advance on the city – giving rise to freak sandstorms in the city in the earlier part of this decade. As I’ve seen so often, sadly, in this beautiful continent ‘development’ more often means destruction – of a country’s natural resources, landscapes and ecosystems. Adapt or die becomes adapt AND die. And take everyone else with you, in China’s case, as it continues to develop destructively into its surrounding nations as well. (But more on that later…)  Of course, the finger can’t be pointed at ‘China’ as a whole, however. I’m aware that I’m talking primarily about a faceless mass of Chinese politicians, rather than the general Chinese population. There are over 2,000 environmental groups in China. Some work, no doubt, in threat of imprisonment, but most are probably simply ignored. Environmental issues play second fiddle to economic development as that gives the Chinese Communist Party the mandate to rule – the world’s fastest growing economy proving their worth.

With the landscape of their city and lives changing rapidly in front of their eyes, I was desperate to talk to some ‘normal’ Beijingers about their daily life and their views but this was impossible – not only does virtually no-one speak English  (and my Chinese was limited to stuff like ‘Hello’ ‘Thank you’ and ‘Crispy fried shredded beef’) but I can’t imagine it would be easy for them to openly criticise the government, so mostly they remained as elusive and enigmatic as their martial arts.

Anyway, here endeth the lesson on Chinese politics, economics and environmental concerns. I shall actually get round to talking about what we did in Beijing in the next post! Sorry if this sounds like a bit of a university lecture, it’s just such a fascinating time to be in Beijing at the moment. More on this great city to follow…