Arriving in a mass of dust we disembarked at 2,753 meters above sea level.  This was higher than we had been in India´s Sikkim, yet there were STILL mountains surrounding this really beautiful town.  Walking off towards town, ignoring cries of “taxi” we headed off past the terraced, single-storied rows of houses and shops, some with the colour wash bearing the plaster beneath as it had collapsed on to the street below. 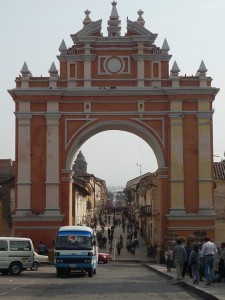 After investigating some Hospedajes (Hostels) in decent Spanish, being able to find out what services were offered with the room (a TV costs a lot more, hot water and a private bathroom is more), all were more expensive than Huancayo.  We continued and decided to follow the recommended hostel in the Rough Guide, while continuing to pop our heads in to others en route to compare prices and understand what you get for your money, a crucial part of traveling on a budget.  We arrived where we should of but no hostel.  Laura negotiated a 25 Sol room down the room, but after walking around, asking people, no one knew where the hostel was.  We never found it in the 4 days we were in Ayacucho.

Either way the room we had in “Hotel Grau” was good, comfortable bed and pillow, the hot water worked and it was clean.  This is all you need.  With 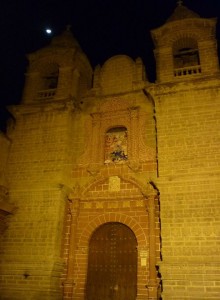 only time to have a brief wander around to see the town lit up in dull oranges from the traditional streetlights and spot lights illuminating the beautiful colonial Spanish churches, we headed to food.  We heard that in South America perhaps the cheapest way to eat was to go for the daily menus that generally included a starter (often soup) and a segundo (second course).  We found one for our evening meal, but suddenly our Spanish was no way good enough to understand what we could have for the price.  Laura ended up with spaghetti with tomato sauce and I tripe with vegetables.  Interesting.

The next day we sauntered across town, enjoying the morning heat, the pure blue sky without a cloud in it.  Girls giggled when they saw me and the boys tended to look at Laura and then the ground fairly quickly.  It seems that the Peruvians are a shy bunch of people.  We reached the main square which was really well maintained, green with loads of perfumed flowers.  Opposite was the imposing, grand cathedral, which was impressive for the relatively small size of Ayacucho. 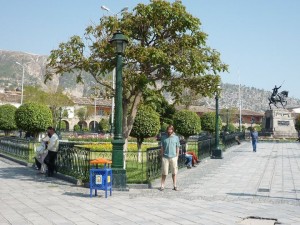 On a vague mission to find a coffee in the sun and relax we pass loads of printing shops, modern banks and other smart offices.  This place is more modern than the dusty Huancayo and with the cobbled streets looks like a really nice place to live.  Old ladies sat by the road selling flowers as offerings outside the many churches and old men smiling and saying “Buenos dias” in genuine recognition, was refreshing and made for a welcoming atmosphere.  We found our coffee and sat in the square with the many people eating ice cream, a past time that seems massively popular here and in the Peruvian highlands overall.  We decided to treat ourselves in the evening and have a pizza, which was decided as a diversion away 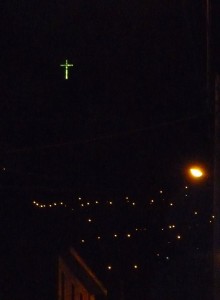 from meat and rice.

We set out again under the vague stars that were washed out with a dusty haze.  The only thing that really illuminated the sky was a massive christian cross on the hills, which stood above the city lights built on ledges overlooking the city.  A definate sign that the religion was an imposed part of the towns life and that the Spanish colonialists were decisive in converting everyone in the area and making Gods presence known.

The pizza restaurant was good and here we found Pisco sours.  In Lima we had tried Pisco, but the drink to have was a sour.  This was simply Pisco with a sweet sour mixture and beaten egg white on the top with a dash of some kind of brown liquid.  Really tasty though and we only needed 2 each, which is good really as they were 10 Sols or half a days accommodation each time.  We sat and soaked in the Latino music of the restaurant and the night was finished off with a firework display in our view for a local´s birthday or engagement we were told.

The next day we spent catching up with our future plans, which seemed a shame because of another pleasant warm day and beautiful surroundings.  Either way the darkness of an Internet cafe was necessary and, as we tell ourselves plays a small, but necessary percentage of a massive trip.  That evening we treated our brain dead selves to some local food.  It was in a recommended place and we managed to secure the turret which overlooked the restaurant.  Laura has the speciality of Trucha frita and I had the Cuy or Guineapig in a tomato sauce.  Both were ace and with a side dish of maize (the local sweetcorn which is massive) and queso or unpasturised cheese.

The next day we realised we were almost out of time in Ayacucho and so decided to have a look at the churches properly and to visit a museum that was dedicated to the “city of blood”, as Ayacucho was named after the decisive war against the Spanish for Peru´s independence.  The museum was accompanied by a female soldier in uniform, which was a bonus and we actually understood more of the explainations than we thought.  Including the fact that many roads in Peru are called “Tupac Ameru”  and this we learned was the last Inca leader who fought the Spanish.  The Baroque artworks were really something though and even had a picture of the last supper, but with Pisco and Guineapig on the menu!

We spilled back out on the street and were faced with a line of locals in traditional dress, a band playing behind them and a lady walking along giving out maize beer.  Amazing.  We fancied a drink and it was amazing that on a random week day at 3pm things like this can happen in Peru.

The next day though we had to pack up and leave once again.  Back on the roads and heading further up into the clouds yet again.  We felt we couldn´t head higher, but it happened, we slink our way around the switch back turns up a steep mountain face and are then met with the Andes highlands.  Tough heather like grasses with random grey boulders standing to attention at random intervals.  Some locals get on the bus and then off again in the middle of nowhere.  The one problem with these buses we realise is that often salemen heading to different cities will give you a protracted sales speech to unload somekind of herbal medicine that guards against any ill you may have.  This is done VERY loudly and in the slick, I want to kill you, sales man way.

Eventually he shuts up though and we make it over the mountains and bypass more breath taking views as we roll into Andahuaylas for the night after 11 hours, to break a 20 hour journey we couldn´t be bothered with.  After taking our first Peruvian rickshaw to a hostel that is recommended, Laura’s negotiation again that sees us taking a room with single bed and avoiding the “extra person” charge that is common, to give us a room for 15 Sols or 3.50 pounds.  Ever so efficiently we were sat in a garish theme bar with a jug of beer in around 30 minutes from the station.  After a quick beer we went for another ace, smelling, but crust removing pizza and jug of sangria, which we were not charged for before bed.  It seemed like a few hours, which I guess it was before we were back on a bus and heading to Cuzco.

This route it turned out was a great choice as despite the roads still being built, you pass by a glacier and the now snow capped mountains, despite being relatively warm in the sun.

After listening to Lemon B and the Bells of revolution, trance music that fit the ongoing scenery to perfection like a sound track to a non-stop nature progamme, we again reached our destination.  Welcome to Cuzco and the sacred valley of the Incas.