Tadlo Waterfalls and a Festival

Making the most of Thakhek

After a much shorter journey than anticipated our bus pulled into a bus station 2km away from the centre of town. We began to walk down the side of the road, not wanting to fork out for a tuk tuk. Within 10mins of walking a man and truck pulled over and offered us a lift. This was greatly welcomed as our Lao Lao hangover was not helping the pace of our walking. The man kindly drove us to the only two hotels in Salavan and didn’t even ask for money. It felt nice to be off the well traveled path, where I suspect friendly locals offering lifts may be harder to come by on more well trodden routes!

The only 2 hotels were not amazingly cheap and so we were forced to opt for 40,000 kip for a room without a bathroom. It occurred to me what an incredible deal we had got in Tad Lo.

Salavan itself is a small town centred around a central market. This market is the main distributor to the surrounding areas. At first glance it seemed much smaller than the market in Pakse. Starving, we hunted for a place to eat and settled at a small place outside the market. The lady was busy mixing a concoction of spices and herbs in a pestle and mortar which we presumed was in order to make Laap (the Lao style of cooking). Her husband offered us soup for 10,000kip; we gladly accepted. The soup was wonderful with many fresh vegetables and a tasty broth with rice noodles and some decent chunks of chicken. It was served with a plate of fresh mint and some green beans- very similar to Pho but a healthy portion that did a good job of filling us up.

To fill the rest of our afternoon we took a walk to explore the local area. Heading to the river, I had read that it was a nice place to hang out. To get there we had to walk through what felt like a little village on the edge of town. The houses were stilted wooden shacks unlike the town houses which were the most modern we had seen in a while. The roads immediately reverted to dirt tracks. Domestic animals roamed freely around, however, predominately the pigs would sleep in the shade under the stilted buildings.Unlike other villages like this we visited or passed through, this one really felt like it didn’t see falang (foreigners) very often at all. 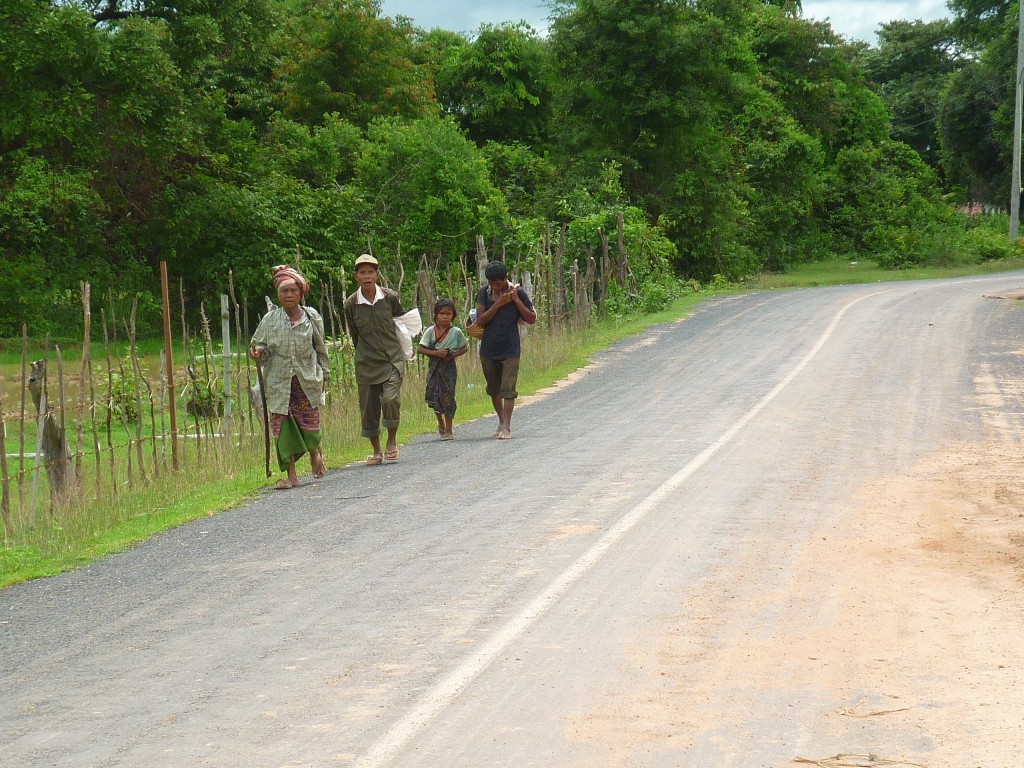 Along the riverside there were 2 places to buy a drink and enjoy the view. We tried to buy an iced coffee in our best Lao ‘song ca phe meun mbien’. This was met with a confused look. Surely they could understand ca phe! Eventually a man came to the young waitresses aid. He understood but replied; ‘No have. You want beer Lao?’ Under the circumstances I am sure this would normally have been ok with us but due to the hangover from the pumpkin party the previous night; we declined.

We continued down the dirt road which led us through the village and away from the river edge. Ending up turning around when we met a very muddy part of the road.Combined with it being the heat of the day we decided to return to town to find a cold drink and have a siesta.

4:30pm we woke hot and hungry so we checked out the market to see what food we could find. Mostly being raw produce we opted for a bbq stick of unidentifiable processed meat balls and a big bag of cola to keep the hunger at bay whilst we got a feel for local prices. Al tried on several flip flops and soon realised no one stocked his big western size in these parts! So we left with some peanut toffee sweets and still in need of dinner. Perhaps at 5pm it was a little early to eat dinner. All the potential eateries were empty or at the most, had a lady in an apron preparing something. The only place with people eating was the same place we went to for lunch. This time we pointed to whatever the customer in front of us had. 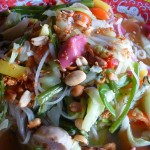 A spicey noodle, veg and sausage mix. It was so nice to have lots of veggies after 5 days in Tad Lo where resources only seemed to last a couple of days after a market run.

With our overall intentions being to try and travel directly north from Salavan we spoke to the lady in our hotel (daughter of the owner). She told us it was not possible to go north the way we wanted. After asking about different ideas and options I was beginning to think it really is extremely difficult to even get to Tahoy let alone any further at this time of year. Also enquiring about renting a motorbike was met with a negative result. All they had was a confessed to be shit bike that could only handle tarmac at 100,000kip per day. With that being a no go we asked where else we could find a bike. ‘No where’ was the response which was hard to believe with bike shops on every corner of Salavan! So we went and enquired at the first shop we came to in our very broken Lao. 80,000kip per day on a brand new bike. Perfect! With this result we decided to stay for 1 more day and see the surrounding area on bike, then attempt to travel north. By then, at least we could get a better measure of how impassable and muddy the roads really were and perhaps ask around a bit about options.

The next morning we rose early, excited to explore on bike. This was soon dashed when the bike rental suddenly wanted US$500 and a passport for deposit or US$5000 with a passport copy. Crazy money we just don’t have. After trying to explain and persuade the man (via his friend who spoke a little English) and getting nowhere we felt deflated.Our hotel owners had been extremely unfriendly and wouldn’t even give us a little hot water to make tea (despite a thermos sitting full in reception). This combinedwith the motorbike situation, we chose to leave Salavan and attempt to travel northeven if it did mean going back past Tad Lo to Pakse before hitting a main road. We had heard so much about the Lao friendliness and this surely could not be it! By 10am we had bought a bus ticket to Thakek via Pakse. A little dissapointed with our failed mission to go north in the centre of the country, we began to understand that Laos’ roads are very underdeveloped and with it being rainy season moving around was not so simple even for the locals.

THE BUS JOURNEY Salavan to Thakek 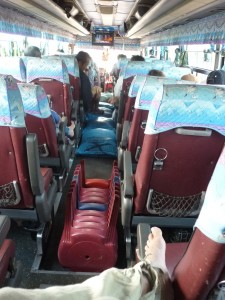 Back to Pakse was an easy section of the next supposed 10hrs. The bus was almost empty, no music and great scenery as we passed the Bolaven Plateau for the last time. With a half an hour wait in 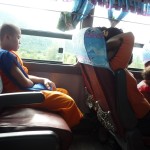 Pakse we bought bread and iced coffee in a bag. We opted for the very back seats on our final bus. Before the bus even departed the music was blaring and kareoke videos were in full swing. The bus drivers assistant fancied himself as a DJ and kept changing the videos and music around. It was impossible to escape the noise as the bus was installed with several speakers. The wiring for the speakers nearest the back (and us) were visable and Al ended up giving into temptation by pulling the wires out. A young monk directly next to the speaker looked relieved and glanced at Al gratefully.

The bus was busy but not full so I chopped and changed seats to enjoy the view and avoid the blast of dirty aircon which particularly dominated our seats. No sooner the bus would start driving, it would stop again to pick up and drop off people; or just stop to allow the engine to cool down a little. It crawled all the way to Savanahkett for 8 long hours. Here we were one hour away to the 10hours we had been quoted. Unfortunately we sat there for an hour with more loud music and videos before the bus final left to Thakek. The bus was now ramed, perhaps the last express bus of the day? The bus certainly changed gear and sped up for the remaining journey until we finally pulled into Thakek station. With a huge sigh of relief we dissembarked. Our next mission: Tuk tuk, find a bed, cold beer.