We woke after a good flight, having numerous white wines and a salmon dinner, which was actually pleasant (I know we talk food a lot, but it is important and amazing when you get something half decent on a flight). After a highly rigorous Biohazard security check of out tent and boots with scanners and uniformed staff, who actually missed a seed on the bottom of my boots from Brazil, we joined forces with another couple who had pre-booked a hostel. As now in the habit of not booking in advance and seeing what happens, leaving room for spontaneity, we joined them for the cheaper ride into town and to their hostel in the predawn blackness. At this point the stark Englishness about the place hit us. The landscape, roadsign font, English language, climate, left-hand driving and organisation of the city felt very much like home.

The hostel ended up too expensive for us, so we ended up contemplating our options over a dirty Mcdonalds breakfast. Grease, salt and sugar were needed at this point. We had to wait until many of the hostels had opened reception, but to make things confusing we had landed on the night of daylight savings time, which meant we went back 1 hour. But since we crossed the date line we had lost the 2nd April altogether, but essentially only 23hrs! We just concluded that we were the victims of April fools day and secured the cheapest looking place when it opened and we had garnished opinion reinforcing that fact. 19NZ$ was supposed to be good (we were on a 2.1NZ$ to 1 pound ratio so accommodation was taking up all of our budget before we started the day, which was not good). After a nap we had a wander out and were exposed to the high street filled with familiar brands and the coffee culture of New Zealand. 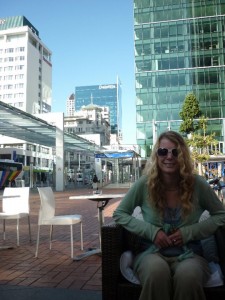 A flat white is typical, very creamy milk and a lot of it, which makes it rich. They are massive fans of designing the froth on the top of their latte and cappuccinos turning their coffee into an art form and showing their love for the bean. For the rest of the day we explored and got lost meandering through streets as we like to do when exploring. We found a park next to the university and relaxed, dozing through jet lag in a tranquil park, while being amused by people watching, like a guy jumping into the fountain fully clothed, singing “what a beautiful morning”. Auckland is relaxed, modern and clean. A change from recent times as a whole and one that was enjoyable in being able to enjoy modern comforts again without needing to watch you back.

Good value Chinese and Korean restaurants competed in numbers due to the large population of Asians there, including the large Asian student population. We had a large soup with tea and 4 main dishes for 12.50NZ$, which is good value considering prices in general here, the size and quality of the food. I don’t think I have had a Chinese that good in a while as I did in the “BBQ Duck”. Everything here is or almost European prices, which has taken lamb off the New Zealanders table as the good quality stuff is sent to Europe while the prices of what remains is as high as Europe. A similar story of local foods that we hear time and again from different countries.

The next day we arranged to go couch surfing with a lady who lives across the estuary from the city, in a yachty village called Devenport. Think of an English village on the Thames somewhere in the country. As this would save us some cash and we needed to try good quality New Zealand food, which by nature of the different nationalities that brought their food here through immigration is fusion, this needed doing well. We knew this as the chinese was well represented as was good English food. The Auckland fish market was immense and well stocked with a much wider variety of fish that found in the UK. We sampled Kiwi fish and chips, which was on par with the UK variety, but with more exotic species on offer. So, this was our excuse for booking a meal at the rotating restaurant in the Sky Tower that evening. This was extravagant, but we’d write it down as an activity, which would mean something down the line would be sacrificed and we just worked out that we were currently dead on spending 10 pounds a day, averaged over the whole time we have been traveling, and cheap Asia was next. We were doing the foods of New Zealand well at this point so why not continue!? Well that was all of our justification anyway!

That day we had a real city day, drinking take away coffee and visiting an art gallery, learning about the 2 main artists that focus on Maori subjects. We walked down by the harbour and soaked up city life.  That night we scraped together our finest evening clothes and I was reminded once again that bringing one “nice set of clothes” was a good idea, despite the extra weight of something that was being used so little. With a previewing on the observation deck we had a gin and tonic, checking out the thousands of flashes buzzing around the harbour and roads disappearning into the black of the countryside.  This really was the hub of New Zealand, with a population of around 4.5 million, where 1.4 million is in Auckland alone. 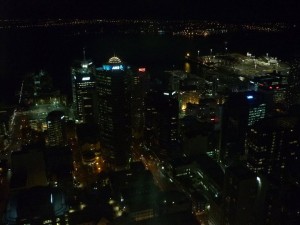 It will be interesting to see what the rest of the north island is like after we finish our retreat. Checking out the city and our meal was great, it was strange but novel seeing the kitchen come and go as you rotated around the city. 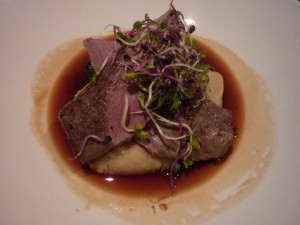 My New Zealand lamb with cumin mash was the typical fusion we were looking for and of quality. Laura had New Zealand grey mullet and we shared a bottle of a recommended white wine to ensure we at least sampled all the stereotypical specialties produced in this country.

We packed our bags and left them in the secure room as usual before check out and went back to the library to use their free internet. Yes, their library is so well organised that you book a time to use the net and your waiting spot appears on a screen. Such organisation and efficiency! We took pictures of the things we may need in Fiji and looked at books on New Zealand cuisine. We grabbed lunch at one of the many international food halls that bring together most of the major types of food represented in the world before running into our host that night, Sarah. She complained of the sterile Auckland that lacked anything interesting to do and advised us to go to the grimy area called K-road which had more character. We did and passed some graffiti artists, but everything here still seemed clean. 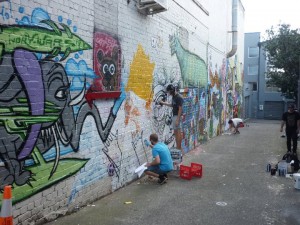 The massive homeless Maori people smoked weed openly on the streets downtown, so that wasn’t surprising to see here. There was a retro 80’s strip club with a large worn picture of a topless model complete with 80’s hairdo made out of wood, but now peeling to reveal the times that had passed. Some sex shops with video cabins and that was it. Essentially it seemed like a past red light district that was now exposed and modernised as the city grew. We did find a pub with Guinness and cider and listened to an old man pick up a 24 year old girl who admitted that she had fleas before leaving. So I guess she was grimy in the true sense of the word, but we didn’t feel the area was. It had spirit that has been heavily varnished let’s say.

After Sarah finished work at 5pm we set sail across the water and admired the view of Auckland’s skyline, clean lines and glass. That night we sat around, drank honey beer and regaled stories of all of our travels.

The day then came when we had to leave our modern ‘upgraded’ reality. We had just enough time to walk up the Davenport hill to check out the fort at the top, take in the breeze and vast view of the surrounding islands, one of which emerged out of the water in a matter of weeks in front of the Maoris eyes.  Some people think that Auckland will be a volcanic area again soon. Looking around to see downtown Auckland and further round just green hills rolling into the distance, some peaking into distinct volcano cones from long ago. 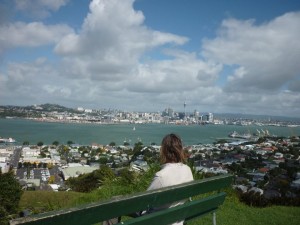 We slid back down the hill like kids, staining our behinds and found the north shore beach, which was deserted and beautiful. This would be a fantastic area to live if you wanted peace and quiet! Empty and serene the gentle waves lapped the shore as the scattered clouds cast dark patches over the otherwise glistening sea. 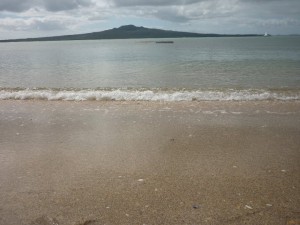 We headed back as it began to rain and then grabbed our bags to head to the boat, grab our last coffee from Starbucks, for me to have a final cigarette, before taking the bus into the unknown…