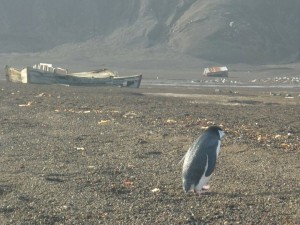 After an hour of SW course we arrive at oursecond destination and come into the bowels of Deception Island, its name given to this volcano’s obscured entrance. Still active the beach is black and digging a little smells of sulphur and is warm. The beach is littered with remnants of a British base. 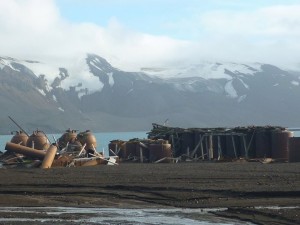 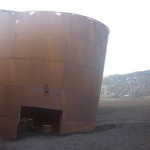 4 massive iron drums , delapidated wooden buildings left after the volcano erupted.  There needs to be a clean up operation here.  Although the contrast is beautful in this golden light it is not right for the environment, even if a forced evacuation was necessary.  Heavy machinery and paint left around to rot, all in the name of science.  Since the treaty came in there must be a responsibility for governments to take care of their impacts on the continent surely.

There are also historical remnants of whalers, a water boat and old casks that transported the processed oils, now left in piles since the late 1800’s. Looking along the shore line you really can imagine the hive of activity this place has seen over the years.  It is a history book all left to tell its story. 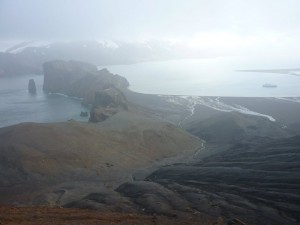 The day has cleared up and clouds lifted to blue sky and delivers immense reflection from the snow. We walk to the highest point called ‘the nipple’ where the wind is a lot stronger and you apreciate the shelter of the bay. We can see the “sewing machine” needles below and Peter’s point , that marks the narrow entrance to the bay. Clouds stream across the mountain at this height and high wind makes it bitter.

After taking in the immense view of below and appreciating the raw nature of this landscape, which really is nature at its best, I head to Neptune’s window. A lowering of the Island’s peak and supposedly where the first explorer saw the Antarctic continent.  Back on the beach Gentoos hang out awkwardly on their stomachs. Fur seals roll around and scratch on the wooden casks. A lake from the melt water is used by the Skuas as a bath. The relative lack of snow here reminds us that we are in summer despite being freezing.  Most of these birds just sit and relax, bt they are curious and one goes for my crotch. They have very sharp bills and a wing span of 1.6 meters, so not to be messed with! I move. 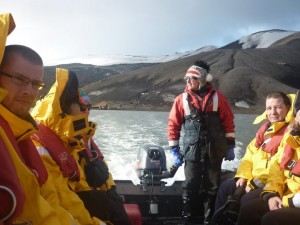