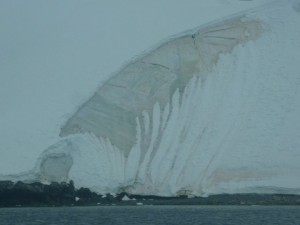 Today is our last in continental Antarctica. Over night I spent another hour on the bridge talking to Barrios who is on the 00:00- 04:00 shift when everyone else on the ship is asleep and I go to have a smoke and learn about the ship. Phillipe comes with me this time and I successfully relay all the information I am taught to answer all the questions he asks me under Barrios’ guidance, which is grand. Staying up late has paid off in knowledge.We also learn about the weather conditions over the next few days verified by the conditions we saw from the bridge and in the morning time. Choppy seas getting rougher later with 30 knt average winds. At this point we were back in the South Shetland Islands travelling through the Bransfield Strait over night. We were planning to land on Robert Island a small island to the east of full moon in the same volcanic chain that we explored on the way to the peninsula.

In this weather however it was not possible and so we cruised around the shoreline, admiring the rising needles of volcanic rock creating sharp spires out of the sea. After sailing around for about an hour and a half we approach Barrientos Island to glimpse an unusual landscape to those we had seen before.  It contained an expanse of green! The captain took the ship slose to the shore and it was decided that despite fairly rough conditions that we would make the final landing of our trip. With my now disasterously unwaterproof trousers I take to the boat holding the flaps together. The drizzle and grey humid air are not helping my cause, but wet clothes will be ok being the final landing. 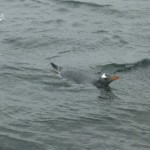 The beach was covered in Gentoo penguins, as was the water. Adolescents learning to swim and having a wash, groups would come to shore and emerage with a splash, staggering up the stone beach. We head upwards towards a pass to reach the beach on the other side of the island. A gradual bank covered in thick moss, which was the green we could see. 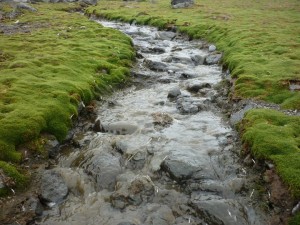 The skuas are nesting on the moss and watching with utmost curiosity as to what these things in yellow (us) are all about. If you kneel down they have no problem coming over to check you out- a little too close often. They also hang around the penguins, waiting for the weak, but will also harass a parent and child when feeding to see if they can intercept a regurgitated pink sausage of krill. Penguins will fight back however and try to give the Skuas a good slap, which is all very entertaining.

We walk up a stream to avoid damaging the moss for around 700 meters until we are looking down on a hazy sun lighting up a rocky spit and beach. A rock pillar covered in orange lichen rises from the beach, angular and raw.

On the beach itself there are fur seal adolescents, which seem less bothered by our approach and distance than others we have met. Their hands look very human when they scratch their ears, manipulating their fingers with dexterity. They sit on the shore amongst washed up debris. Mostly red seaweed, but also a lot of massive whale bones. 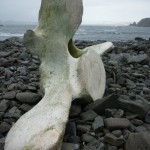 Rib bones are at 1.5 meters and vertibrae that cannot be lifted. Some are sunk into the beach, becoming part of the harsh landscape that claimed them. 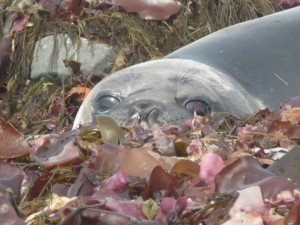 Elephant seals also hangout on this beach. Beautiful animals with cat like features and massive jet black eyes. Even young, these animals can reach 1 ton in weight. They exhanle air at you if bothered and open their mouth if you are too close, but otherwise just laze in the thick seaweed. This is a diverse island with one scene containing 1 Gentoo penguin squalking at a Skua while a fur seal watched, while 2 other Gentoos stopped to wait for a chinstrap penguin to pass by. Oh and 1 human in the background. An amazing sight with such a contrast of animals all occuring along a sun highlighted barron brown shoreline. 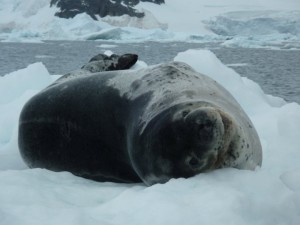