People started filtering to bed until we were the last at 1am. Sitting in the freezing snow with 6 layers on and 2 hats, but still getting slowly colder drinking the bottle of whisky, when the stars slowly came out. Orion looked to be there, but shorted and more distorted, if indeed it was Orion. The rest unsurprisingly new to me.  We crashed an hour later anticipating our 5am wake up call, after both of us spent enough time gazing up and reflecting on life.  With 2 sleeping bags and all my layers on I slept soundly, more so than onboard and was warm enough. We woke at 5am, the scheduled time with moderate winds shaking the tent vigorously and giving us the feeling of steep pressure changes through our ears. Getting out of the tent was hard, but the cold wakes you up nicely and quickly.

We landed back on the ship alert and ready for the the day via a refreshing sea spray from the waves being created from the mornings increasing winds. This is a hazard for my now ruined and reducing ‘waterproof’ trousers. These ripped on sliding down Danco Island, but were developing holes just by walking before that. walking now leads to ripping, which is not great as waterproof trousers are one of the most essential items you need here. Wet equals very cold. Duck / gaffer tape doesn’t even hold in these conditions. I tried later, but the glue doesn’t seem to stick as well in this cold, especially on this surface and on areas that move a lot like your crotch. 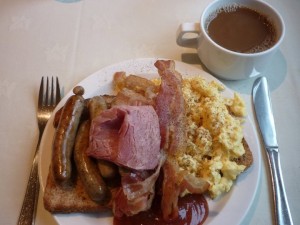 It was 06:30 when we landed back onboard, so we had an hour till breakfast and 2.5 hours until we would reach Port Lockroy around the corner on Wiencke Island. Upon arrival the wind was taking off the crests of the waves and striating the sea, an indicator of 40+ knt winds. The Antarctic post office is at Port Lockroy, so postcards from all passengers were gathered and a boat sent with significant ballast to avoid flipping it in these winds to the tiny island for delivery. 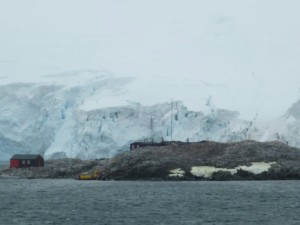 The last boat to the Falkland Islands has left for the season and so the post will leave in November to the Falklands and then to the UK. This will take 8 – 9 months.