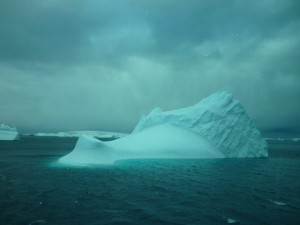 After our cruise around paradise bay we fished out a large piece of glacial black ice. This is dated to 40,000 – 50,000 years old. The bar man washed and cut this up to enjoy a very old, single malt whisky. Then another and an other. After everyone had gone to bed I was up yet again on the bridge with the captain, monitoring iceberg movements ensuring they were not on a course with the ship that meant we would have to move. A chore at 00:00 till 04:00 in the dark night with just 3 monitors to stare at. Hypnotic in face and no wonder he is chain smoking and drinking coffee- it was necessary. Howling wind. pitch blackness. I was taught more about the ship and technology used to navigate. The Ocean Nova is surprisingly shallow at 4.5 meters and with a flat heavy steel bottom to deal with iceberg collisions.  This is why we rolled so much, but also why manouvering and accessing shallow areas is easier. One iceberg came into sight and cruised straight past us, while others did not really move. 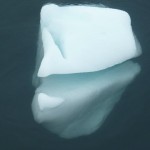 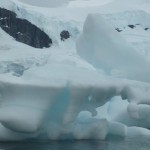 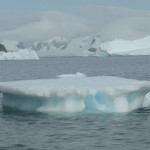 The next day’s 07:30 wake up call was hard and I missed breakfast for the first time. Tonight is our campaign expedition, so catching up on the hours I am missing at night is important. Being tired means being cold. It is dull grey outside with the usual low cloud obscuring the magnificent snow crested peaks.

It is snowing outside and landing was at Port Charcot on Booth Island. This is a charcoal grey island made from beautiful granite, just off the Antarctic Peninsula. We land on the rocks that meet the sea, white streaks and white snow coming in from the west provides a beautiful contrast of shades that I have never experienced before. The landscape is devoid of colour, just grey sky with blowing dull fog and low cloud, the dark grey rock and white snow. Well that that is not strictly true as the gentoo penguins have their dots of red beaks and spread out on the landscape were the passenger’s yellow jackets speckled across the island.  Snow algae provides patches of pink tinges to the ground near the shoreline.  The colour as you can see all comes from life on Antarctica, feeding off the land in some way or another, existing in stark contrast to the black and white land of this desolate continent. 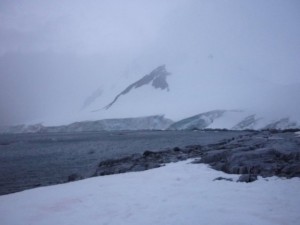 The island has a large colony of Gentoo penguins and also harbours a few nesting sites for the Adelie penguins, which we have not seen yet. Their numbers on the west coast of the peninsula are in decline and they tend to leave the nest in February, so perhaps our only meeting with this species of penguin, but the are no where to be seen. After snow exposure my camera starts seriously malfunctioning and eventually completely stops working. Damn. On the positive side however it removes your photographers eye and makes you appreciate the experience in person.  A blessing in disguise. 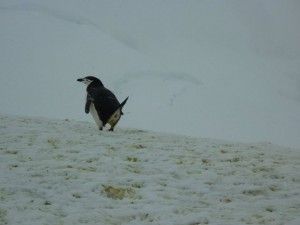 Another short trip  SW down the coast to Petermann Island, which Adelie penguins also leave earlier than the Gentoo’s are not found and have already moulted and left for the year out to sea.  From this rock landing, which is fairly trecherous given the snow fall and choppy conditions we walk parallel to a clear penguin pathway. This is made by the adults as they come back from feeding in the sea, walk up the hill to the rocks on top that provides shelter and is a distance away from the sea-based penguin predator – the leopard seal. Remains of penguins turned inside out are the visual remains of those that didnt make it, half buried under snow and only decomposing after the Skuas had piked their remains clean. With flippers held behind them for balance as the parents waddle up hill comically and in numbers. We join them at the top, another nesting site that stinks of dead/decomposing fish from penguin faeces, something David Attenborough never mentions in the documentaries.

The last of the Gentoos are half moulted and behind them around 8 Adelie penguins stodd motionless to save the large amount of energy needed for moulting. Completely black heads and beaks, quite short and dumpy distinguish these guys from the others. With my camera still bust I never capture the small dumpy Adelie penguin. I sit on rocks instead by the “creche”, or collection of chicks left by their parents in numbers for saftey to go fishing as a pair.  When a parent arrives all chicks start calling and flapping excitedly. Some chase the parent, sometimes two compete in a race to mum for feeding, looking like they are trying to jump on its back. The parent runs off and a chase begins in a hyseria of sqeeking and throaty vibrating noises. Some adult penguins hop about and survey the 4 or 5 corpses that are half decomposed and scattered about.

Skuas swoop close over head surveying the weak or isolated, looking for its next easy meal. With an imposing 1.6 meter wingspan these birds are not called Skua (should be spelt skewer) for nothing. Heading back down the back of the island after taking in the scene there was a cove, where light “fresh mint blue” seas demonstrate the low salt content of the water and the reelatively shallow waters. A splashing around soon proved to be a leaopard seal thrashing a penguin about. Rolling around playfully, it looked like it was having fun. These animals have cat like features and always look like they are smiling, which is slightly disturbing, but it is taking its time in ripping the penguin up. It looks to be around 4 meters in length, so a good sized adult. 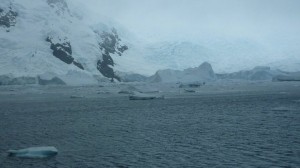 Next we head further SW though the Lemaire channel. There were small ice bergs and “bergy bits” littering the channel, but on this agile ship we easily manouvered around them, slushing our way through lines of brash ice. 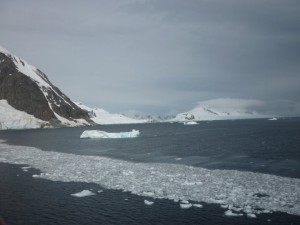 The channel has massive cliffs looking down on us, towering black igneous rock, delicately snow dusted. As we pass through the islands, whisky in hand and opening of the channel, exposing us to the continent itself allowed huge gusts of winds, we learn later were 70-75 knts or 110 km per hour to blast us on deck, burning your face and driving you hair horizontally backward. 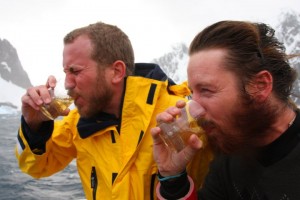 The full power of the Antarctic katabatic winds at work. At their most powerful the cold air in the centre of Antarctica falls and accelerates to the ground spreading out in all directions and screaming along the smooth continent to the dea. These can be sustained wind speeds of 200km/hr and the reason Antarctica is the windiest place on the planet. Despite the temperature showing between 3C and 6C in general, with the wind you feel below freezing. The dry conditions also help the wind pull heat from the core of your body. Fingers hurt after a few minutes and start turning white.