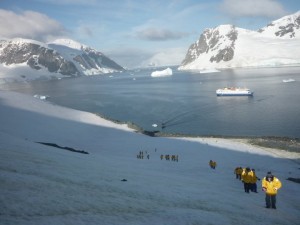 Having headed SW through the Gerlache Strait and along the Danco coastline we sheltered near our day’s landing- Danco Island. The morning is fine, crisp and sunny. It is under these conditions that Antarctica teaches you that white is actually a colour. Peaks on the mainland proper rise out of the ice sheets, where glaciers angle down to the sea with hundreds of vast crevacesses scarring the smooth white of the ice sheet. 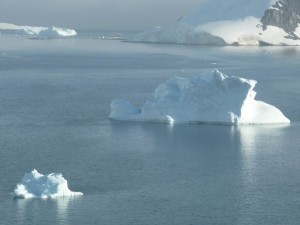 This morning we see icebergs as large as the ship itself and ice debris litters the granite beach, melting in the morning sun. We hike to the top of the island at its peak.  Passing 3 colonies of Gentoo penguins including freshly hatched eggs that were remnants of the now fluffy, grey adolescent penguins. 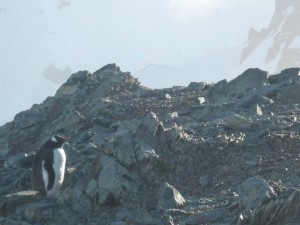 The summit rewards us with a view to die for of the actual Antarctic Peninsula. Walking on this land SE would take you to the South Pole and Australia for thousands of miles.  Cracks and loud thundering signal the ‘calving’ of the glacier, but we do not see any- it is hapening internally within the glacier. Cloud starts building over the Peninsula’s mountains, as the ice melts it evapourates and condenses back into cloud in the cold sky. 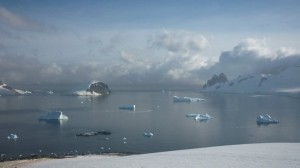 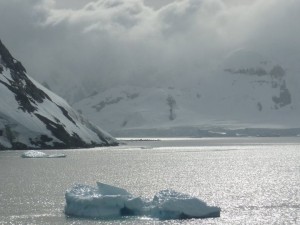 From the top a few of us slide down. I tear my waterproof trousers that seem to be of the worst quality. Wearing the inside leg as well just through walking so clearly bad quality.  Attempt to patch with gaffer/ duck tape. 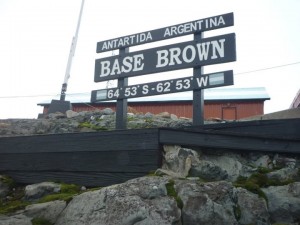 Further SW down the coast we land at an Argentine base called Almirante Brown, named after the honored Irish sailor who fought off the Spanish and Portugese for Argentina. Beautiful coastline with curved striations in the ice formations. See a large wedge of ice that falls into the sea and creates a big wave in this sheltered bay. You see it before you hear it which is a strange sensation.  Two snowy sheathbills follow adolescent Gentoos to pick up a meal of sticky, vermillion red krill waste. This dense colony is covered in deep guano and feathers as the baby Gentoos hide behind the base for wind shelter. 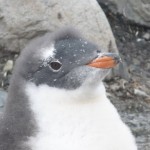 Next we take a zodic, inflatable boat out with Yamaha 40 engine for a spin around the coastline to check out some icebergs and paradise bay.  We clunk our way through brash ice and hit a few big pieces that made the boat lurch, while making our way around the ice berg graveyard.  A place where icebergs are motionless as they have been grounded.  Skonthorp cove has some massively impressive calving holes and you can see the movement of water here is massively complex and extremely powerful.  Romaneque columns are formed in some and arched in another. Different coloured layers are seen in iocebergs due to the different concentration of air in them that allow the dating of the ice.  All of them are unique sculptures. 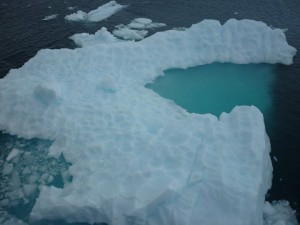 As the iceberg erodes under the surface quicker they become slowly top heavy and start to lean over revealing the layers that make up the ice sheet itself that came off the continent. Some eventually roll over.  Apparently a sight to be seen.