To Varanasi and Luxury!

Agra and the Taj

The only issue of our 26 hour delay was the fact that we had 2 days in Agra to see the town. Although we this was the only place that we were going to only see a tourist sight 2 days would have been good.

We landed at 12:30pm and had our train out to Varanasi the same night at 9:30pm. This makes me nervous know that we know the general rule to add 30% extra time to anything that should take x time then we have little time to see the Taj or anything else. The good news was that we no longer needed to stay in Agra and pay Rs700 (11 pounds) for the pleasure to stay in tourist town. The better news was that the hotel had already arranged a pick up for us, which we used to get to Agra city train station in order to secure confirmed bunks on the next train, which we had to do as priority. The rickshaw driver was used to tourists and had a book of recommendations and was really useful (makes a change) in figuring our plan of attack. Although he was hunting for us to pay for a full day tour we used all the needed information, declined and went to the booking office. A dedicated tourist booth, which was empty due to low season was really useful and made things quick- a novel benefit associated with a tourist town for sure. 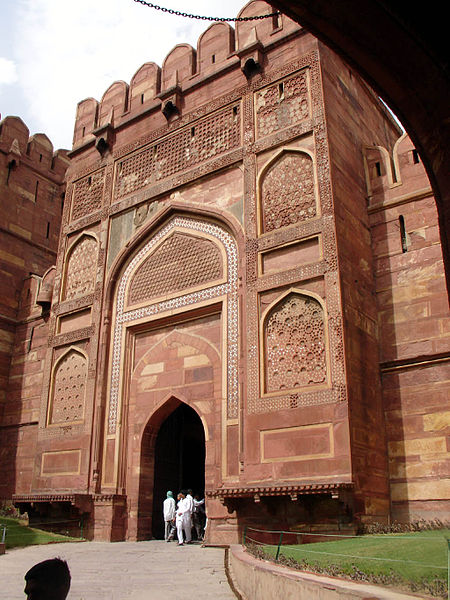 The two sights in Agra are The Fort (above), which was where Shah Jahan, the man who began building the Taj Mahal was imprisoned by his son Aurangzeb, who later transferred the capital of India to Aurangabad and continued building Daulatabad (interesting considering we had just seen Daulatabad a week or so previously). The next needs no introduction and the clear winner, the Taj.

After some extortionate offers for a rickshaw ride (knowing the distance) we decided to walk towards it until a reasonable offer turned up. We walked along the grounds of “The Red Fort”, took so good photos. We realised that you could buy a combo ticket for both and were tempted, but getting to the ticket office we decided to focus on one, took a photos of the commanding battlements (See above photo, which is pretty much the same shot) and main fortification and I was happy enough to give it a miss.

Further down the road we saw a horse drawn cart, which was quoted at Rs40 (60p) to the Taj, same as a crappy auto-rickshaw. What a way to arrive! Done! So despite the horses looking a bit ‘broken in’ let’s say we were whisked down the road on a flimsy cart and Laura ‘drove’.

The Taj is Rs50 for Indian people and Rs750 for foreigners, something that hurts as the visitor, but something I applaud in terms of policy and something I think the UK need to adopt. Proving access to your history as priority, while charging visitors more (or at least some) for the maintenance of the sight is a must. Anyway, we coughed it up and walked through the first arch that frames the main Taj structure perfectly. Again, we are not aiming to see the typical sights on the trip and want to avoid sightseeing tourists, but this is a must. Truly spectacular and amazing to compare it to the “poor man’s Taj” in Aurangabad. The marble keeps it’s colour, maintained it’s sharp edges through resisting erosion and sparkled. Certainly a romantic structure that deserves it’s wonder of the world status. We managed to usher people out of the way of the classic picture view so we could get the classic picture and were pretty much awe struck the whole time.

With our tourist kit as part of the Rs750 package, we were given water (needed) and shoe covers, so we didn’t need to walk barefooted on the boiling marble like the poor locals who didn’t cough up. The building is perhaps unsurprisingly the most well kept thing I have seen in India and the semi-precious stone inlays in the marble are still flush and crystal clear today. In the burial chamber the infamous marble screen is truly incredible. How you can carve decorative voids into panels of marble an inch thick is beyond me, let alone with the technology available in the 1650’s. We managed to capture an illicit photo, purely because all the Indian tourists were using flash everywhere and the armed guards were paying zero attention.

We wandered around the other Muslim structures on site and sat in the garden looking at the Taj for a few hours before deciding to find a rooftop terrace overlooking the Taj for dinner before heading to the station. Surprisingly we were relatively undisturbed by the usual “let’s have our picture taken of a westerner so we can tell them how many foreign friends we have” (seriously this fact has been verified by numerous people now). A few were taken of Laura when I was taking a shot, but my new line of “That will be Rs100 please, my wife is a model and gets payed a lot for having her picture taken” ensured pictures are deleted in front of me quickly.

We found the ideal place and apart from a few tables of Lonely Planeters (a word I have just invented to describe people wandering around clutching the book for dear life) we had 4 hours watching the sun set over the Taj with a beer and now typical Indian curry (Dal fry, rice, 1 tandoor roti each and a share dish of veg, this time muttar paneer- peas and unpasturised cheese).

We headed back after our lazy afternoon of staring at the Taj and decided to catch a cycle rickshaw to the station. 4 modes of transport in one day is not bad. Now to pick up our nights supply of water and snacks for the next journey to make a total journey time of 23 hours in 3 days.