A World Apart in Vientiene

We drank a few parting iced coffees with our new friends, discussing future adventures together for 40 minutes before picking up 60,000 kip tickets to the capital city.  I hurriedly picked up 2 banana leaf parcels, half a chicken that was bound together by bamboo strips and piled up on a grim counter.  A fan with plastic bags attached to the end span around above the food, to keep off the hoards of flies that hung around the food areas.  We said a sad farewell and were waved off just as the music DVD was being inserted and the baby near us started screaming.  Great, jammed in, seat doesn’t recline and when the rain started streams of drips soaked me.  Despite using my dirty hands eating kept me occupied from going stir crazy with these non stop irritants, which was the worst since India.

We reached the capital at night fall as I developed a stomach ache and felt pretty bad. So luckily the Tuk Tuk to the centre was easy and the price quoted was below what we had been advised in Takek (it was 20,000 kip each).  Still flying down the road with you mouth watering, smoking a cigarette to occupy your focus in the heat of night in a new city is one of the many surreal experiences travelling puts you in.  We found the “Sabbay Sabbay” guesthouse that was recommended to us ok.  Unfortunately it was in fact full, but at 30,000 (£2.50) for the dormitory and 60,000 for a double (5 pounds), with the receptionists abrupt, unhelpful attitude we were happy to find another place.  Laura found Syri II, 60,000 for a double room and a far nicer hotel rather than guesthouse.  It had a communal water cooler, which is great in a country with no clean drinking water as that saves you quite a lot of money in the long term. We then freshened up from the bus grime and set out in search for food and ate a good quality burger, the first westernised meal in a while, in a airconditioned room, TV and other modern items around us that felt quite strange.  We were suddenly back in “civilisation”.

The next few days were internet based as we caught up on blog writing, caught up with friends from home and reconnected with the world before disappearing into the wilderness again. Administration exists even on a round the world trip!  We hired some bikes to explore some of the sights but concluded that 50,000 for the cheapest motorbike and the crazily expensive fuel in Laos (12,000 kip or £1 a litre), in addition to entrance fees were out of our budget.  This was a base to get ourselves organised before setting off to the remote north. 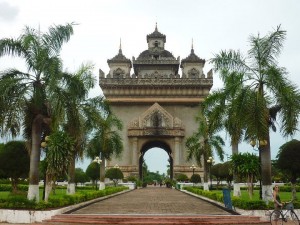 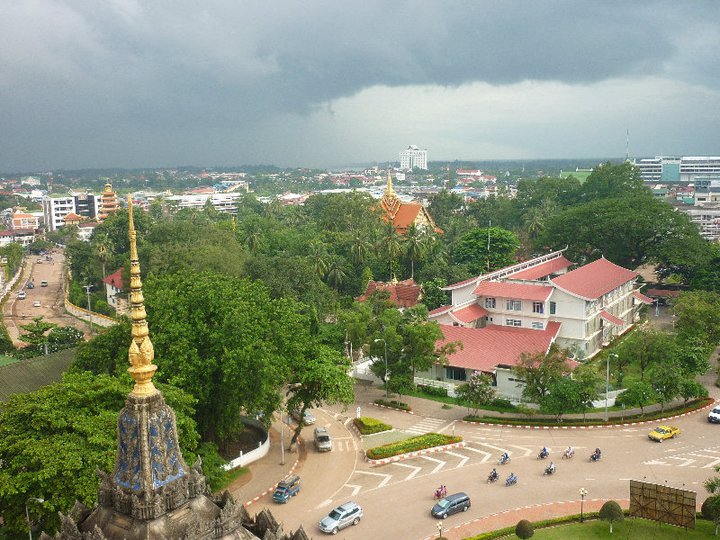 View over the city of Vientiane

We cycled to sort out our visa at the immigration office to sort out our visa extension, which cost $2 per day plus $3 admin fee.  This proved to be cheaper than using a travel agent, which charge $3 per day and so make a fortune. After submitting our passports we cruised around looking at what Vientiane was all about (well the limited area we could see in a few days anyway).   No high rise blocks, many temples adorned with dragons (a symbol of power and good luck) and gold paint. Nowhere as near as many street food stalls as other places, which were replaced by glass fronted establishments. Vientiane is a clean and modern city and has all the western offerings you come to expect from a capital.  There was relatively little history being displayed however.  We visited the peace monument, Vientiane’s own “Arc de Triomphe”, although in the government’s own words (read on a plaque outside) due to war “it is unfinished and looks like a concrete monster”.  A nice view from the top, but a shame each floor is filled with market stalls of tourist crap being sold at inflated prices.  We spied a towering temple from the roof and headed there next. 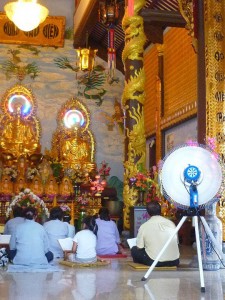 It started to rain heavily, which we waited out before heading back to the tourist area next to the Mekong for a beer.  We were caught in the deluge of rain anyway though, as the monsoon reminded us it was there. We sat in a restaurant with a BBQ grill outside, 10,000 kip beer (84p) was a great price for a beer in the city, which is, as expected far more expensive than other places in Laos.  We sat there for more and then decided to stay for food instead of breaking away from a good atmosphere. They had whole river fish covered in salt cooking on the BBQ and opted for that.  Laura asked the table next to us what they had and they helpfully helped us order as we wanted the jeow (local chilli sauce) and salad accompaniment, which you need to be specific about. The food was delicious although the fish was not cooked through, but we were assured that the locals like and eat it this way. Not great for a dodgy stomach, but didn’t seem to do any harm the next day.

We set out and headed straight for the bus station to book a ticket to Luang Prabang and check prices, as travel agents quoted 145,000, which 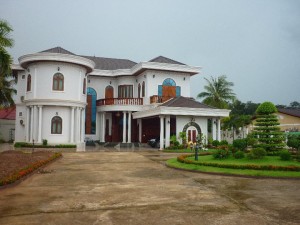 seemed very expensive.  The centre of Vientiane soon disappears and opens up into rice paddy fields, goat BBQ restaurants and local beer halls lined the road.  Out of town glorious, massive houses with columned doorways and fountains were our glimpse of the Laos rich elite.  The bus turned out to be 130,000 for an overnight “VIP” bus, so the 145,000 including a taxi to the bus station for 15,000 was actually good value.  We headed back and were soaked again in the torrential rains, which we waited out in some part, but is not worthwhile for long, as you would do nothing.  It is not like the rain is cold either, just a liability with money and a camera in your pocket.  En route we tried to find coffee to sit it out, but outside of town you just have beer.

The day before we had scoped out a buffet and were tempted by a foray of different traditional foods to try simultaneously for the purpose of writing our book. We have found that buffets are a great way to try a range of traditional foods, assuming you go to hotels that cater for visitors from the same country, as we did in Ho Chi Minh city, Vietnam.  Having missed lunch we considered 49,000 as an investment and an activity as well as eating.  It was great and we pretty much had the place all to ourselves.  Freshly made noodle soup and fish dishes left us satisfied.

Another internet day passed before our pick up at the travel agent, which incidentally we missed by having a departure beer, jokingly commenting that the rammed Songthaw (large tuk tuk) was our ride.  They had to swing past again to pick us up and we squeezed in the already full vehicle, amongst displeased comments about the conditions. Yet more people were crammed in later on- the reason we paid just 15,000 kip per person to get to the empty bus station.

The bus here was no better than the last to Vientiane, tickets were hurriedly issued, so that Laura and I were separate, despite being plenty of room. We sorted that out and slotted ourselves into the small seats on the clearly ironically named “VIP” bus. People were complaining already and to be fair it was sweltering on there. This time it is worth noting that VIP means with Air conditioning and no opening windows. If the aircon doesn’t work as was this case then you are miserable.  Ours didn’t cool anything for 8 hours and amidst complaints to the driver one guy was being fanned vigorously with his top off and hung his head in dismay at the prospect of the next 14 hours.   That is how our bus journey from hell, worse than the last even started. We had been warned that it was bumpy and windy, which you can read as highly unconducive of sleep, but we felt we had experienced discomfort before, but this headed straight to the top of horrible.  Stopping every 3 hours to let people go to the toilet is fine, yet the lights were turned on every 30 minutes or so as the driver tried to fit more local people on to the bus for extra cash. We had been guaranteed this would not happen.  If locals use the bus then it takes so much longer to reach the destination, as cargo, chickens, children and all sorts and taken on and off the bus. The seats are disputed all the time as is the price. It takes so much longer and is so much louder, especially

when trying to sleep.

The only plus of the journey was waking up with my head clattering against the window on a hair pin bend in a mountain range as far as the eye could see.  Dense with vegetation and a mist sitting over them to create a white collar shrouding the peaks.  We instantly recalled Sikkim, which unsurprisingly is on a similar latitude and is in the hills; rugged, lush wilderness for miles on end.  We wound down the mountain side to Luang Prabang.  We arrived shattered and in need of caffeine, having slept very little and instinctively sat with a few coffees each to wait for Jan, the manager of the Bamboo school and our boss for 3 weeks to pick us up to our next adventure.