Our final week in Fiji

23:00 we land in Australia. Through what we expect to be our most scarey customs yet without a problem. It works in our favour to admit to tea, a few shells and a tent. They don’t even glance at all the weird objects hanging around Al’s neck. Phew! 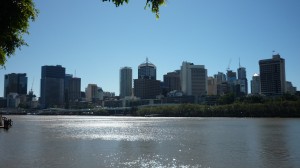 With printed out detailed directions to Andisha’s house we pile into a taxi with a fresh Aus$50. Really unsure on how much 24hours in brisbane will cost us, we speak to the taxi driver. He reckons Aus$30-40 for a 15min journey. Ouch! This is going to be painful we couldn’t help thinking. We decide that the 50 bucks has to last us. We glide down the smooth tarmac motorway to a little cul-de-sac. Andisha, my friend from school who I haven’t seen for 11years greets us at the door. I had butterflies in my stomach, it was a strange thing to do. We had grown up and experienced the later part of our teenagehood on opposite sides of the world. Ansisha and her family left Holland to New Zealand, so there was a hell of a lot of catching up to do in a tiny pocket of time.

We enjoyed a brif chat, but it was late and Adisha had to go to work early the next day. Our only other pocket of time together would be over a family dinner for 2 hours before we had to get to the airport to catch a flight to Hong Kong.

The following morning Al and I spent a little time with Trishan (little but not so little anymore brother) before he also headed out to work. Andisha’s mum kindly took to day of her volunteer job and took care of us. She fed us up with a fry up and took us into the city to show us the river front area. It was so unexpected to us to be taken such good care of. She even bought us our train fare into town which allowed to use it for a full hour. We greatly appreciated this in a city with similar prices to London. 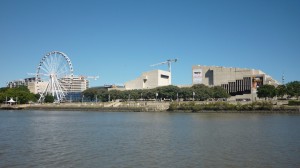 The riverfront area felt like Southbank of London, and ironically shares the same name too. With some nice public spaces such as the man made beach, we had a lovely walk with Andisha’s mum before saying goodbye for a couple of hours. Highly recommended, we caught the Satcat (public catamaran service)up and down the river. The edges of the river were built up and very concrete with large roads going along a large section of the innercity section of the river. We could definately relate to people who had told us that Brisbane was a concrete city. Once we were away from the centre we were able to admire gorgeous millionaire riverside houses. They reminded me of the upmarket properties that feature Kew in London or perhaps areas on the way to Greenwich. It was hard to imaging that the river levels during the January flooding must have created incredible damage in these properties. Compared to the satalite images that were broadcast of the flooding, the river seems back to normal with mininal damage evident. 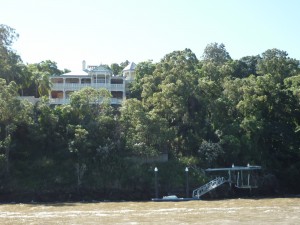 For a couple more hours we wondered around the city centre which consisted of shops and juice bars, a very similar feel to a town in the UK with lost of the same shops too. Feeling rundown from our infected mosquito bites we bought some overpriced smoothies and people watched in the sun.

Not overly inspired by Brisbane and feeling quite exhausted from the travelling, we headed back to Andisha’s house on the train. Interested to note the some what snotty message to students that at a discounted rate they are not allowed a seat.  Also the fact that their development posters blatantly played on the family security strings of “As a maintainence worker I am like you and therefore do a great job as I have a family and I want a safe rail network- Yours, Ken the maintainence worker.  Yuk!

We arrived back having enough time in the city to see that it was… er r a normal, clean, modern city.  We felt that it would be much nicer to keep her mum company and help with the dinner she wanted to cook for us. Although we had a key to the house, the alarm had not been turned off so we managed to disturb the neighbours in this quiet cul-de-sac. Luckily Andisha’s mum came home soon after and we didn’t have to camp out on the door step for long!

For the rest of the afternoon I hung out with mum and we chatted all about everything. It was really nice just to be in a comfortable home and reminisce the old times. It was just unfortunate for Andisha that after work she had physio apointments she couldn’t get out of. Oh well, her mum would do a good job of relaying all the gossip.

That evening we enjoyed a lovely meal with the whole family. Andisha and I managed to look over some old photos. Al enjoyed a long and in depth discussion about India with Andisha’s dad, who had strong opinions on the country.

Before we knew it, it was 8:30pm and Andisha was driving us back to the airport. We spent about 40 out of our 50 bucks in 24hrs. I felt that it had been the best use of our 24hrs in Brisbane possible. It had been amazing to visit such an old friend, even though it had only been about 3hrs with Andisha herself. Luckily for us, she is moving to the UK this summer, so we can continue our long overdue catch up.

With no airport check-in issues this time around and a stamp out of Australia, we took off. The next day we would be in Hong Kong. The start of our travels in SE Asia would commense. Gooday Australia, Neehow Hong Kong!